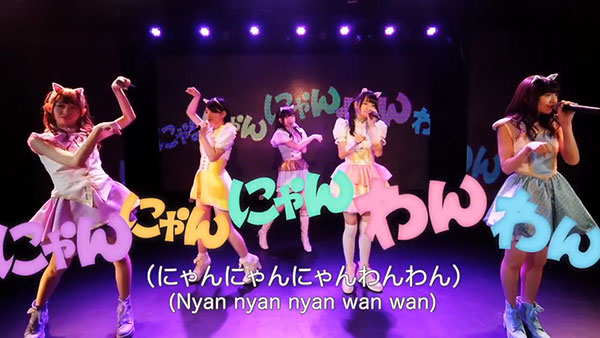 Wa-suta has really made a mark in my idol fandom circles. “Ultra Miracle Final Ultimate Choco Beam” totally hit dank meme status with its absolute insanity and catchiness. To maintain the hype for their upcoming album, an older song of theirs, originally sold on a music card has been given a refit and video. The results may be a bit more on the average side, but still fun.

The video side of things is pretty simple. This PV is a straightforward studio live concept with very few surprises. Judging by the outfits and looks of the girls, I’d say this was probably filmed before “Ultra Miracle”. I’m fairly sure these are the same or very similar outfits to their Tokyo Idol Festival appearance. They’re cute enough but feel pretty bare-bones compared to the ones we saw in their previous PV.

Probably the cutest aspect is the cat ears. Luckily, the dancing is also really fun to watch. Wa-suta is really high tension and makes extensive use of fun, energetic expressions and this PV is a great example of such. It may be a pretty plain presentation, but these girls still bring the energy so it’s not boring at all.

The song itself is nowhere near as enthralling as “Ultra Miracle”. Listening to it, the main thought I have about it is “Yup, iDOL Street.” It’s not bad at all, but you can tell this was written when the group was still trying to find itself. Well, I say that like they have any studio albums behind them, but you know what I mean. It could easily be a GEM or Super Girls song. Lines are distributed fairly evenly and it allows everyone to get some camera and voice time in. Since that’s pretty important early on, I’d say this song, and now PV, set this group up pretty well.

So yeah, this one falls into pretty average territory, I think. Luckily in Wa-suta’s case, average is still pretty fun.