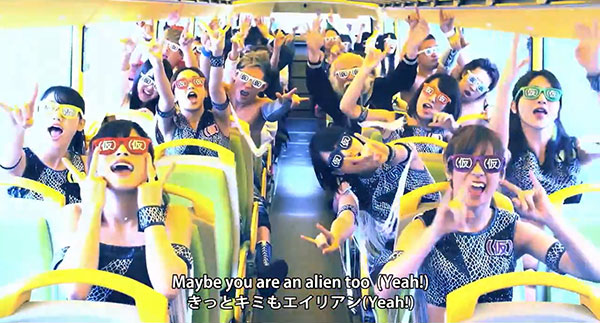 I have a complicated relationship with Up Up Girls. I’m honestly not a fan of everything they do, but I love the group. Sometimes, their releases can be downright dull. However, when they get it right, they’re rock solid. They’re also quite awesome live. I was lucky enough to learn that first hand. Great girls and great fans, man. I think this might be the first time I watched an Up Up Girls PV and felt middle of the road about it. Too bad, but at least I don’t hate it, I guess.

“Party People Alien” follows a very LMFAO-like formula in both audio and video. There’s tons of things going on, and it makes generous use of extras rather than relying on aftereffects to catch your eye. Garry educated me to the fact that a lot of these people are Japanese pro wrestlers. That fairly infamous old guy who dresses in seifuku also makes an appearance.

We also get a selection of random extras to the side half-assedly following Up Up Girls’ moves. Unfortunately, I don’t really feel like these extras add much of anything. Their presence is pretty inconsequential and feels more like it’s taking away from the great dance shots.

Luckily not all hope is lost. The dance shots may be dispersed, but there’s just enough to satisfy. The members of Up Up Girls are ridiculously great performers, so I’d much prefer them busting a move and moon-walking to a cross-dressing ojisan just there for…some reason.

The dance shots are actually filmed in the ridiculously hilarious Robot Restaurant in Shinjuku. It was a pretty good choice as the cheesy futuristic look fits in with the song’s electronic instrumentals nicely. It’s just enough to save this PV from meh status. It’s cheesy, but at least it’s quality cheese.

The song itself is a much better story. While it has a very distinct LMFAO flavor, it still has enough Up Up Girls in it to sound familiar. This is the kind of Up Up Girls I like, and while I wouldn’t rank this as one of their stronger songs, it’s still pretty fun to listen to. The instrumentals are really not the most lively or original they’ve put out, but they’re good enough to get your grove on to.

All of the members also get at least one solo moment to shine which doesn’t always happen, so that’s cool. The outfits are fairly generic if not slightly disappointing, only differentiated by a colored (Kari) logo for each member. The sunglasses are pretty awesome, though.

So yeah, for the first time ever, I am calling an Up Up Girls release “just okay”. Yay?