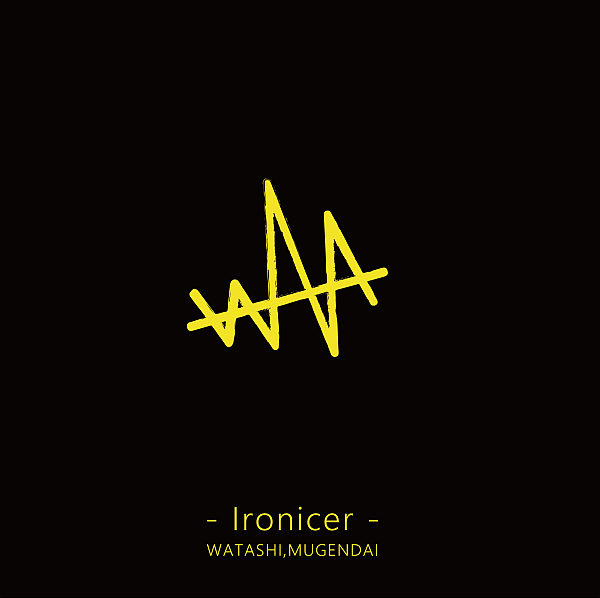 My thoughts on “Ironicer”, the latest EP from Watashi, Mugendai.

In 2019 I set myself a goal of trying to make time to check out releases from groups that I might otherwise have skipped over for one reason or another. Mostly due to being busy more than anything, but I felt I could do a lot more with the site than I was at the time. I think it ended up being pretty successful, I discovered a bunch of cool music from groups I’d never checked out before and I had a great time sharing them with you guys. You can judge yourselves though I suppose.

I figure we’ll continue down this path in 2020 and we’re start things off today with Watashi, Mugendai. They’re a 4-piece independent Idol group who have been active for a couple of years now, mainly in and around the Tokyo area. They cite “Digicore Hard Rock” as their main style which I guess could translate into Digital Hardcore or something similar in layman’s terms? That’ll be something for us to find out in the course of this review, how exciting!

“Ironicer” is the group’s second EP and features 3 tracks in total. While I have heard of the group before writing this review, I don’t think I’ve ever really listened to their music at all. As such, I’m coming into this thing blind and I actually like that aspect of reviews like this. I’m definitely intrigued by their music being described as “Digicore Hard Rock” and their look is pretty cool so hopefully we’re in for a fun time with this one. I guess there’s only one way to find out though right? Let’s check this EP out.

We waste little time getting things started on lead track “Ito ahare”, with a pounding drumbeat and raygun sounding synthesizers being the most standout features of the song’s opening instrumental. After a nice little build-up some pretty heavily distorted guitar is introduced along with very heavily vocoded vocals so the Digital side of the equation is being reinforced early on here. I actually quite like the groove being given off by the instrumental here despite the rather chaotic tone of the overall song at this point. The vocals do eventually start to come in a bit cleaner and they’re pretty punchy in their delivery while also having a nice melodic quality to them at the same time. The first chorus kinda snuck up on me and it took me a second to realize that the rather abrupt change in tone was actually down to that and not something else. Things get a bit brighter and more ethereal, which isn’t a direction I saw this song going in. It’s a bit lacking in intensity compared to what’s going on either side of it which might not have been the best call in my opinion. It sounds really nice don’t get me wrong, it’s just hard not to think it’s a bit dulled in comparison. From there the song takes on aspects of both styles and it makes for a much more well rounded sound in my opinion. You get the groove from the instrumental, the brighter more melodic elements of the chorus and nice amount of energy and intensity behind the delivery. Quite enjoyable once the song really gets up and running.

Up next is “AMIDA ZERO” which opens on a very glitchy sort of note with a very in your face, pounding drumbeat. It kind of gave me Happy Hardcore vibes a bit, if any of you reading this are even old enough to remember what that genre sounded like. After a drop of sorts some very chuggy, distorted guitar riffs are introduced to give a bit more density to the instrumental along with some air raid siren-esque synthesizers that give off a bit of an ominous feeling by their very nature. The vocals are much more melodic by comparison, not that it would be that difficult, featuring more vocoding to further push that idea of “Digicore” as they refer to it. I rather like the flow of the lyrics during these opening verses and they’re also pretty catchy too which offsets a lot of the song’s rougher sound. The chorus gets brighter and more melodic still, though I’m not a huge fan of how light and airy the vocals sounded during it despite the fairly pleasant structuring and lyrical content. It did start to grow on me a little the second time around but I think I would have preferred if it had retained even just a bit more of a cutting edge. Not a bad song by any stretch of the imagination but definitely a few things I wouldn’t have minded them doing a bit differently than they did.

Closing out the EP is third, and rather simply titled, track “Doubt”. More very loud and in your face Industrial style synthesizer melodies are the first thing to greet the ears as the song begins, with a few guitar riffs and an appropriately dense and intense drumbeat providing the canvas on which this is being painted onto. We’ve built up a pretty nice rhythm to things by the time the first verse comes in, sans vocoding which makes for an unexpected but rather nice change of pace compared to everything else we’ve heard up to this point on the EP. The members of Watashi, Mugendai can really sing when they’re not being assisted by vocal effects in case anyone was wondering about that. For the most part it’s a fairly similar lyrical structure to the EP’s other songs, but the change in vocal tone really makes things sound a lot different than they probably are so good use of production there. I also love how the instrumental incorporated much more of a Groove style to compliment it all, instead of brute forcing the Digital Hardcore style onto these vocals. Once again the chorus is a little bit too light and airy for my personal tastes, but less so than on the previous track so I definitely don’t mind it as much. Fairly catchy lyrical content too once again, which as you all know by now is never a bad thing in my book. Probably my favorite song from this release, so not a bad way to end things off here.

On the whole “Ironicer” is a decent enough EP whose appeal is likely going to hinge on whether the listener is predisposed to liking Digital Hardcore music and its related genres. That said, some of the vocal performances definitely won’t be what people are expecting from the group’s description so don’t be so quick as to judge a book by its cover.

I knew little to nothing about Watashi, Mugendai coming into this review and by the end here I feel like I maybe know just a little bit more about them. While their style isn’t 100% my thing there were definitely several enjoyable moments on this release for me, with the third track in particular being a standout in my opinion. Perhaps if I find the time I’ll check out more of their catalog but at the very least I’ll be checking in with them again on the site the next time they release some new material.

Enjoy the content? Consider supporting the site on Patreon for as little as $1 a month.
BAB RecordsMini-Album ReviewWatashi Mugendai
0 comment
FacebookTwitterTumblrRedditEmail