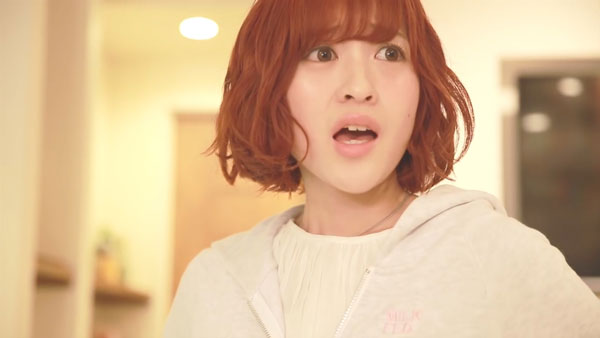 Silent Siren’s latest album came out earlier this year, and it was pretty cool. For whatever reason, they’ve had a pretty major deficit in singles this year, so I guess it’s good the album turned out so well if that’s all were going to get. They recently released a new PV for one of the songs on said album, and it’s cool to see the girls back in action even if it’s for an older song.

This PV relies heavily on a series of scenes that tie into a mini-story. Basically, we’re treated to a humorous take on lead singer Yoshida Sumire dealing with some pretty epic social anxiety. She continuously calls upon her band mates for advice on how to deal with a room full of people. The replies are presented as LINE-like aftereffects on the screen, as well as scene changes to visual representations of the members acting out their own advice or potential scenarios. The way Suu responds is pretty hilarious as she continues to fail epically at the art of socializing. The expressions she makes are absolutely priceless. In the end she ends up with her friends trying to drink away her epic failure. Alcohol solves everything, doesn’t it?

It’s good that the story elements pay off in this one, because it’s a good chunk of the PV. In between, we do get a few shots here and there of dancing and some member solo screen time. What little choreography we do see is mostly carefree and fun, which fits with the majority of the PV well. The solo shots are also fairly nice. The girls look pretty great in this video. They’re wearing fashionable clothes and the hair colors in this one are bright and look really nice. That’s high praise coming from someone who’s usually quite biased to the almighty kurokami.

The PV makes extensive use of CGI and aftereffects. It all looks pretty nice and integrates well with the scene. The moving magazine cover shots often used for member solo shots are especially well done. Camera work is really good across the board and while this PV is quite Suu centric, other members are seen a satisfactory amount as well. All in all it’s just a goofy, fun PV and is nicely done.

The song is also pretty nice. It follows their formula through and through, but the instrumentals are very authentic sounding and from start to finish the energy is quite high. Vocals are par for the course with Silent Siren. If you’re a fan of girls who have a high pitched voice but maintain excellent control, you’ll enjoy this one. If not, well, get better taste. Just kidding. Sort of.