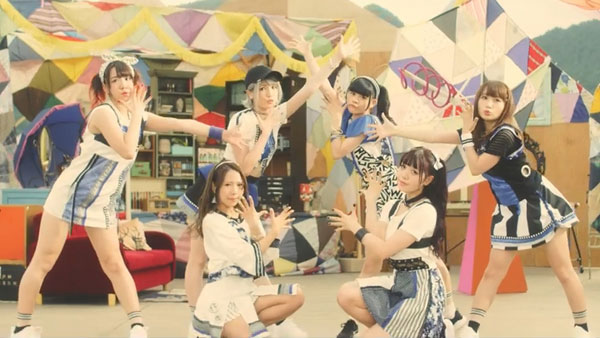 Last time we saw Moso Calibration, they had attempted a reinvention of themselves by veering away from their usual dempa formula and trying their luck at the trending EDM genre. While I feel for dempa idol fans who don’t have many groups to choose from, I gotta say that for me “Chichinpuipui” was a heck of a lot more fun than their previous work. Not to say they were bad before, but it turns out this group pulled off the EDM genre very well. It seems like the group is giving the formula one more go, and the results this time are nice, but not quite as epic as before.

I’m tempted to say this PV is a little more formulaic than “Chichinpuipui”, but it’s not like that one was a genre-sweeping reinvention either. Epic as it was, it was textbook EDM content. I think I’m trying to politely say this PV is, simply put, a little more boring. Don’t get me wrong, its got enough good going for it to be enjoyable.

This PV is very minimalist in effects. Instead, it presents an ongoing series of dance and member shots with a light story element mixed in. Apparently the girls are trying to pull some 1337 h4x0r moves on some guys they’re spying on. We even see some hilarious fake coding going on at one point. These scenes don’t really add up to anything memorable, and I would have preferred they just gone with a stock dance formula if they were going to go back to the basics.

Luckily, the remaining technical elements of the PV are satisfactory. Camera work is good, lighting is well done, and the outdoor set pieces are pretty pleasant. The illuminated umbrella scenes are one part of the PV that does manage to stand out. I think my favorite aspect might be the outfit design. The mostly blue and white outfits in the dance shots are very lovely to look at. One thing the EDM revolution has revealed is just how pretty some of these girls are.

Since learning of this group I’ve had a crush on Futaba Nae which continues, but my goodness, Kurumizawa Mahiru in particular is one gorgeous girl. It’s a lot easier to see the beauty in the dance friendly outfits than their previous frilly dempa era outfits. In the solo shots and interaction scenes, we see the girls wear various civilian clothes. Everyone looks very stylish and lovely. The PV definitely does the members justice.

Sadly, the PV is pretty much skin deep. It’s a nice enough video but the interaction doesn’t really lead anywhere memorable, and for them to spend a decent amount of time on it creates some disappointment. A good watch, but not quite the attention grabber of the previous effort.

The song itself is sort of the same story, but not quite as contrasting. “Chichinpuipui” was a more hype song, but this one is plenty enjoyable. The instrumentals closely follow the previous one in style, but the tempo is noticeably lower and the transitions are far less jarring. Overall, it’s a pleasant little electronic song. I wouldn’t skip it in a playlist, but I don’t think I’d rev up the volume for it either. All in all, it’s nice, but just nice.