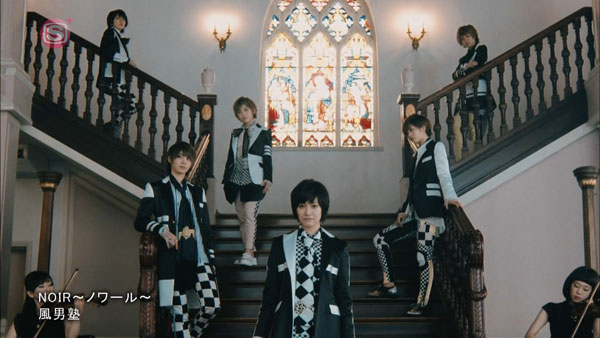 I think everyone learned a little too much about me when I rounded up THE HOOPERS’ latest video. Well, we’re back for more sexual awkwardness with Fudanjuku’s latest offering. Admittedly, I feel like this group may have peaked around 2014, but they’re still pretty fun to watch, and even more fun to listen to.

The last few years, Fudanjuku has gotten increasingly stylish, and they’ve kinda reached a point where their outfits are something you might see down a runway at a fancy fashion show. It’s reached that point where you’d never see someone on the street wearing any of this. I really miss the days of “Dansou Revolution” where the alleged girls adorned clothing you might actually see hip dudes wearing in Ginza, or wherever fashionable dudes hang out.

The outfits here are really nice monochromatic suit-like clothes, but just a little too wild to believe. I think their dansou suffers a little from this. I guess I prefer a little more authenticity from my man-girl-crushes. That’s not to say they don’t look great. They pull off dansou as great as ever, but it’s just a bit too showy here.

Luckily Fudanjuku still offers a solid performance. Granted, they’re not back flipping around the stage like THE HOOPERS, but they’re still really good dancers. They also excel in pandering to the camera, constantly offering perfectly executed expressions and pulling off all the dansou dialogue lines to further fish in fans of the genre. It works. I would do anything Akazono Kojiro told me to do. That newer member who looks a lot like her, Kariyase Light, is quite the hunk of man-lady herself…Is it hot in here?

If we can take a break from the sexually ambiguous zone, we’ll notice that this PV is filmed in what looks like a large early 20th century western building. The dance shot is filmed at the foot of a large stairway, and the solo shots are filmed in rooms with matching decor. It adds class to the scene and fits in with their recent videos.

Additionally, there are musicians playing in the background for the dance shot. It really plays up to the fanciness dansou group PVs often have, and it all looks really nice. Wackiness of any kind has no place here. There is a bit of Japan filter to the PV, but otherwise the shots are presented naturally. Camera work is very high quality and the PV switches between dance and solo shots very smoothly. It’s a very well-made PV, even if I disagree with their recent fashion choices.

As for the song, oh it’s so much fun. Even if some of their newer catalog is a little less memorable, the power they have is just amazing man. I absolutely love their vocals. They project amazingly well, and even though they are playing up the dansou aspect in their voices too, they still throw in just the right dose of feminine to ground it in reality. Their harmonies are to die for and their ability to sync up is unrivaled. Their instrumentals also contain a pretty high standard of quality.

This particular track has more of a boy group sound than some of their past offerings, but considering their genre it’s kind of expected. It’s also not a bad thing at all. The song overall is a real powerhouse and a lot of fun to listen to. It’s much better than a lot of their recent tracks. I enjoy it very much. Maybe a little too much. I’m gonna go take a cold shower now. Maybe Kojiro can join me.

I’m going to shut up now.