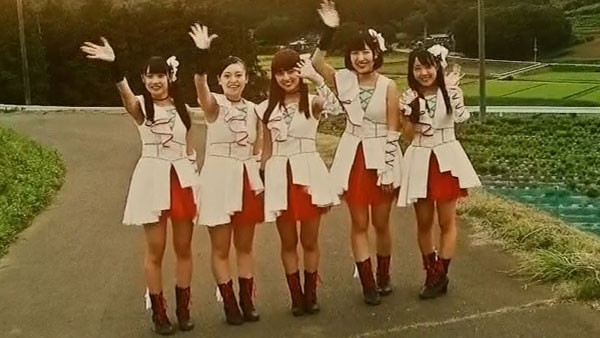 Tochiotome25 is an idol group based out of Tochigi. Well, that’s what a wiki tells me anyway. This is a totally blind jump on my part as I’ve never heard of this group. I’m kinda shocked to learn that they’ve been around since 2010. In any case, what we got here is an entertaining mix of culture and cheesiness.

Right away, the look of this video is very, for lack of a better term, Japanese. Most of the scenery is outdoors and the setting is pretty rural, which I would expect from what little I know of Tochigi. Aside from a few houses and shops, most of the scenery is green fields and seemingly endless hills. It’s a nice change from a standard set, city scape, or the nonstop barrage of beaches we’ve seen so much of this season.

This look continues on in the outfits. Throughout the video, the girls wear these really cute looking one piece outfits. They’re pretty typical idol wear, but the white tops with red and green highlights and red skirts are really reminiscent of what you’d see on a shrine maiden, or “miko”. It’s a nice touch and the outfits look pretty nice.

This PV also makes use of a story of sorts. In between the girls dancing, they’re partaking in pottery and meet some girl whose long lost boyfriend has turned into a frog statue. The girls help him overcome some inanimate opponents and transform back into a dude. It turns out she’s already married, he walks away, but she comes running after him, blah blah blah. It’s neither enthralling nor boring. It’s just kinda there and does an “eh” job of moving the PV along. I would have been more than content with just the dance shot, even though that’s not particularly standout, either. It does the job, but that’s it. In either shot, the outfits and scenery are what make it really worth watching.

Overall the PV is just okay, but the outfits give it some shelf life. They’re that nice looking. Technically the PV falls into the norms: there’s some Japan filter to it but luckily not too much. The scenes are decently shot, although a lot of the scenes are shot with pretty stiff camera angles. It’s okay overall.

As for the song, it’s fun enough I guess. The instrumentals feature a very Japanese style arrangement complete with all the stereotypical sounds of classic Japanese music mixed in with fun but slightly generic idol pop elements. All in all it works, but it’s not the most epic rendition of the joining of these styles. The vocals are satisfactory but they stick almost solely to chorus lines which are satisfactory, but kinda generic if not slightly unmemorable.