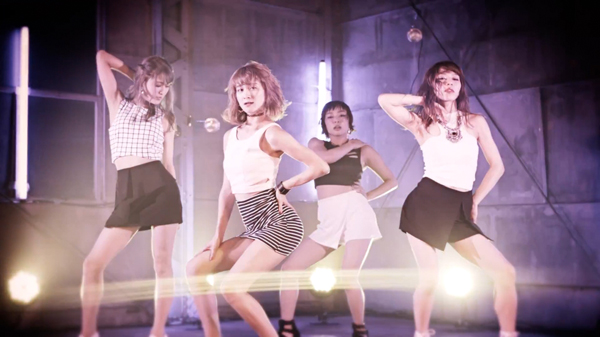 Ciao Bella Cinquetti has been around for about a decade now if you count their days as THE POSSIBLE, and what a group they’ve become. Following their Hello! Project departure they turned from a typical pop group into one of the longer lasting sexy idol groups in the same vein as predia. The sexy formula is definitely in play with this PV.

There’s no hidden idol innuendo in this PV, but instead it’s full on unashamed actual sexual innuendo. Pretty much everything in this PV is made with sexy in mind. The set for this one is full of lights flashing sultry colors as the girls dance a pretty bootytastic dance. Seriously, this PV’s got so much booty shaking going on, it should be named the new anthem for JPH!P. The set also features a bunch of fast sexy cars for the girls to hop in and bend over on. Hey, don’t look at me, that’s what happened in the damn video!

The outfits for this one are pretty sexy without being too over the top, for better or worse. Most girls adorn a tank top and short but covering skirt. Hashimoto Aina’s top is a bit more showy, but nothing too wild. These outfits are extremely form fitting though, so there’s not exactly a ton left to the imagination, and were it not for carefully done camera work on the bending shots, the skirts would definitely show a bit much, but it’s all classy enough. It makes sense. This isn’t a group I expect to go into slutty territory, and the flavor of sexy they do is very nice. Things do get a little sultry in these solo posing shots where the girls are biting onto a cloth while staring at the camera in the most alluring of ways. While everyone looks awesome, Morozuka Kanami wins this PV visually. She’s really hot in this one.

Aside from the sexiness, there isn’t a lot going on. The dance is okay, but nothing too stellar. There’s no storyline or anything beyond some close up solo shots to compliment the dancing. I guess if we’re gonna focus on one element, it’s good that one element is done so well. The production is good. Camera shots are high quality, the lighting is really good, and post processing is kept to a minimum.

The song itself is…eh, it’s nice I guess. It’s not their most standout or even close, but it has that nice “otona group” sound to it that keeps things interesting. Vocals are okay, but like the rest of the song they lack an epic hook or memorable moment. It works, but that’s about it. It’s a nice one, just a tad unmemorable. The visuals win on this one by a mile.