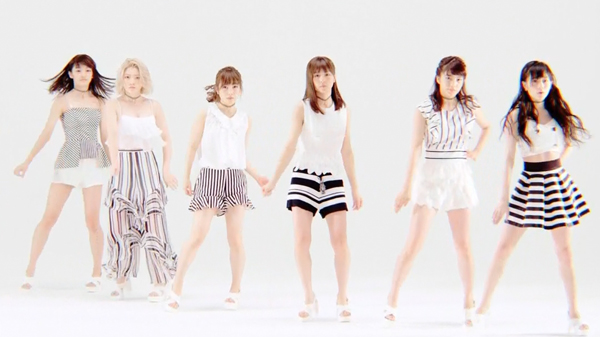 Fairies has been an enjoyable group over the last several years. While some of their more experimental music hasn’t been the best, I really like their general dance-friendly pop tunes. This new release seems to go back to those roots, and benefits greatly from it.

The PV for this one is a bit barebones. There’s no real set to speak of, just a white backdrop. Luckily, this is made up for with some awesome outfits. They all follow a black on white color theme, but we get a collection of tank tops, tube tops, shorts, and short skirts. Skin exposure is still on the kosher side, but definitely fan service friendly.

This PV is kind of a leg factory, which I can’t really complain about. It’s crazy to think all but one of the members are 18 now, and they definitely grew up very nicely. If shoulders are your thing you’ll find satisfaction with these outfits, too. While very showy, these outfits are also, for lack of a better term, outfitted for dancing, so what shouldn’t be showing isn’t. While I’m all for a little excess skin, I’m glad that another “Run With U” wasn’t repeated. That was just odd to watch.

The only other real talking points for the PV are the production and dance. The camera work for this one is good, but I guess it’s easy to pull off when there’s only one scene to worry about. The colors are brightened up a bit, but it works here. It really makes the girls stand out from the white backdrop, and none of the colors ever burn so they got the knob on the contrast just right, I guess. There are a few instances of aftereffects that are forgettable and almost impossible to see as the text color is white. A black stroke around it would have went a long way. The dance itself is nice to watch, but that’s kind of a given with this group, right? It’s not a very intricate dance, but it’s nice enough to make the PV fun to watch.

The song itself feels more like an older Fairies song, which I quite enjoy. They’ve experimented in the past with a more swagalicious style, and while I could tolerate some of it, I would much rather they just stick to this kind of dance-friendly pop. The vocals are their usual fare: not as impactful as their dancing, but still nice. Hell, the group is even letting members who aren’t Ito Momoka get a line or two. This one follows a duet formula between her and Shimomura Miki, and if I recall right there was even line distribution between all of them in their previous PV, so it’s cool to see this group is acting a little more like a group. This is a nice one.