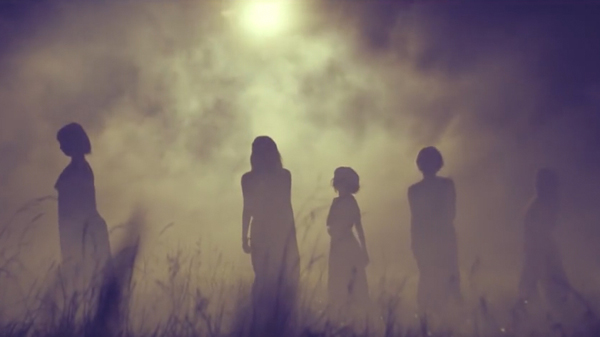 DINOSAUR BRAIN initially struck me as one of the many groups trying to hop on board the EDM hype train. Their previous song was a pretty typical dance tune, but I appreciated its good quality. The group appears to be back with a a debut album incoming, and the tune to get the PV treatment attempts to show that the group does have some depth to them. The EDM elements remain, but this one feels a lot less generic and is pretty enjoyable.

The PV for this one takes place in an outdoor setting with some dystopian elements making for a melancholic, but visually gratifying atmosphere. A lot of the PV is shot behind a black backdrop, but some shots take place in an area with plenty of trees and foliage. All of the shots’ colors are dulled down with a slight sepia tone, adding to this effect. I actually like the visuals of this PV. It fits with the song’s mood pretty well, and it’s consistent. It’s so odd when PVs show scenes with such a massive contrast of mood. This one doesn’t make that mistake.

Speaking of looking good, the girls sure do in this PV. The one outfit for this video comes in the form of black dresses for each member with some minor variations in style. Everyone looks great. The atmosphere of the PV is further accented by the lighting in their shots as well as the way they are made up. The lighting in the dance shots and even the close ups is done in a way that fits with the darkness of the set. You can see the girls fine, but the light is often from a direction that casts shadows over at least some of the scene, and the hair and make up give them a slightly disheveled look. It’s kind of hot, honestly. The visuals for this one are really well done.

As for the audio, this song veers away some from their previous EDM offering, at least for some of the track. While the beginning sounds like a somber pop song, we get right back into the beats instead of having a proper chorus. The instrumentals are nicer in quality than their previous song, but could use a little more depth or variety. The vocals are quite lovely though. It’s also pretty noteworthy that this song is sung entirely in English. It actually sounds fairly decent and is pretty understandable. The lyrics themselves don’t mean much, but I would say that’s the norm for most music if you analyze it too heavily. This is a good one. I like it much better than their last song.