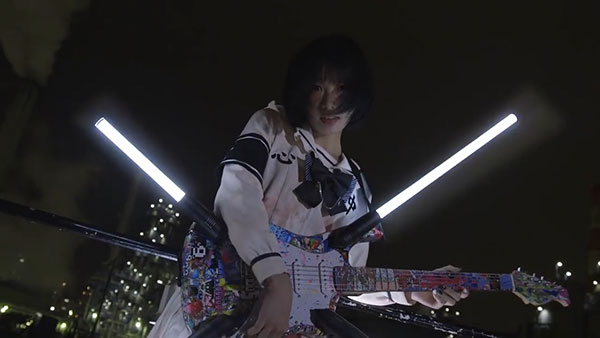 Shiina Pikarin is a very uh…interesting act. I’m new to her, and from what I’ve seen on Twitter I’m not sure if this cute girl is all there, but in a very entertaining way. We’ve seen acts combine idol kawaii and metal death before, but Pikarin in either mood feels pretty damn legit in a bipolar way.

Quite a bit of the video features a disheveled Pikarin running from an unknown masked assailant. In many of the shots she appears to be laughing as she runs, which is slightly odd, but that’s what this whole PV seems to be going for. There doesn’t seem to be any major revelation or reason for anything that’s going on, but it’s presented in an almost absurdly high quality. Everything looks like it was filmed for a movie or something.

Chasing aside, we also get a good amount of standing and singing shots. In some of them, Pikarin is holding this really weird but cool looking guitar of death with four light sabers sticking out of it. Easy there, death metal Jedi. This girl is pretty good at facial expression and poses, so all of these shots are pretty cool. She’s also quite attractive too, and this bizarre mix of cute and crazy is kind of sexy in a weird way. Ahem.

Like I briefly said above, this PV is pretty well shot. The lighting is also above average with even the darkest shot giving a clear view of the action. There are some design choices I do disagree with, namely sync issues. Some shots are used that have no context with the song which creates lip movement where there shouldn’t be any. This is a huge pet peeve of mine. Any kind of desync sends me into OCD mode and I’m constantly fiddling with my media player trying to fix it.

Despite the PV being so well made I do find it just a bit uneventful. It’s great that all the shots are nice, but a lot of them feel the same. I think if there were less running from anonymous masked guy and more performance shots, I might have liked it more.

As for the song, I dig it. It’s yet another idol turned rock attempt, but it’s very well made. It kinda reminds me of Kamen Joshi’s stuff, but with some production value behind it. Pikarin’s voice is pretty cute also, which makes it all the more disturbing but super cool when she goes grindcore on you. The instrumentals do a feel a bit hollow and synthesized at times, though. It’s not quite as high quality as some stuff out there, but it’s pretty entertaining.