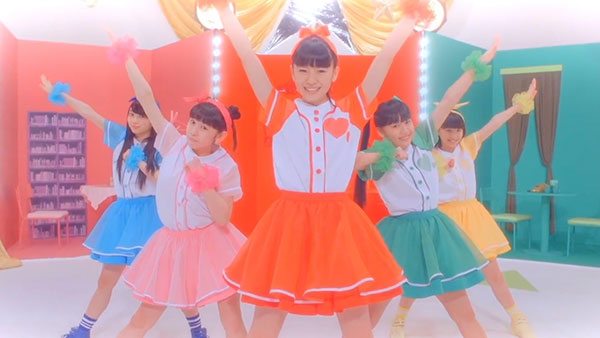 I have no clue who Tokimeki Sendenbu are. Never even heard of them until this PV popped up. Let’s do this! …Oh hey, this is pretty nice!

So, being new to this group, there’s a lot of impressions and sensory information going on that normally might not. For starters, I was pretty taken with how cute these girls are. As this is all I know so far, I’m going to name the yellow outfit girl, who name is Nagasaka Mako according to Google, as my interim favorite. They’re all pretty cute, though. The girls get two outfits in this PV, one being a uniform of sorts totally decked out in their assigned colors. You can tell this is a Stardust group right away, huh?

So cute members aside, what’s going on here? Well, a decent amount of tried and true idol formula for one. This PV has some dance shots in it, but it’s more playful idol dancing as apposed to anything too technically impressive. It’s cute and works, but it does lack impact if that’s what you’re looking for. Tying into the cuteness, we see some shots of the girls in small, color-coded rooms that sort of remind me of the set in Perfume’s “One Room Disco” PV. There’s also quite a bit of playful member interaction in these scenes. More fuel for the cuteness fire.

This whole PV relies pretty heavily on the kawaii factor. I don’t really know this group well enough to assess if they’re capable of more, but what I see here is…okay, I suppose? This feels like a debut single, but from the information I have here it’s their third release. Granted, this is a younger group of idols, but it does feel like a rookie effort just a bit. Not bad, just noticeable.

Luckily the PV does feature really good production value. The previously mentioned sets are nicely decorated, the outfits work for the cuteness theme, and the scenes are well shot and well chosen. All of the members get some screen time and everything is easy to see. There is a bit of over-saturation in the video, but this is the rule in idol PV’s so I’m not going to bother complaining. All in all, it’s simple, formulaic idol fun.

The song is pretty much the same story. The instrumentals border on generic idol-ness, but have just enough depth to satisfy. The singing is good. Their voices seem unique enough to be able to identify them and don’t sound too messed with in post-production. Maybe I picked the right girl because from the impression I got from this song, I think Mako has a noticeably better voice than the other members. Maybe that’s just my yellow fever kicking in. See what I did there?

I will also give this song credit for being six minutes long and keeping my attention. I thought there might be some story in the PV to sit through, but nope, it’s pretty much all music. It doesn’t feel long at all, so it succeeds there. But much like the PV, this so sounds like a debut, but hey, a damn nice debut.

Watch: YouTube (Official, Region Locked)
(Sorry. You know what to do.)