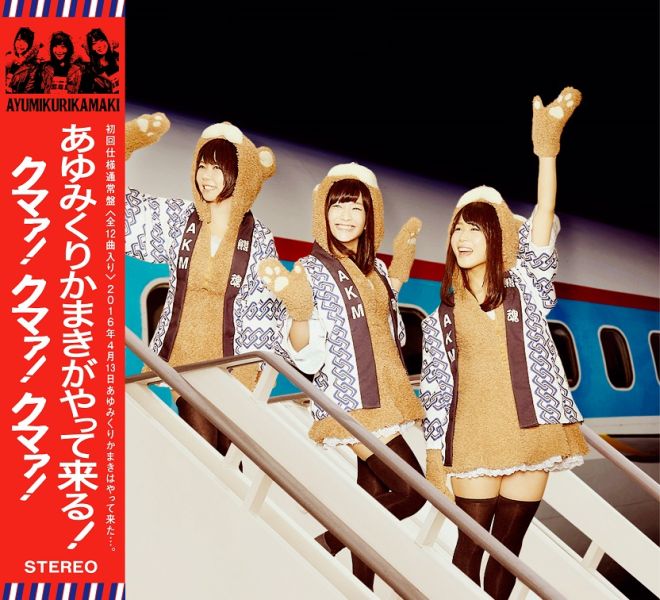 My thoughts on the debut album from the bear themed trio Ayumikurikamaki.

Cute girls in bear…cosplay?, more often than not accompanied by basketball jerseys (or something slightly more appropriate to the situation) and some incredibly hype music and performances. That’s a fairly interesting premise to get things started right? That’s what I thought about two years ago when I first started hearing about Ayumikurikamaki anyway.

Since then they’ve gone on to consistently release music that I enjoy, although perhaps not in large enough quantities in my own selfish opinion. Anyway, you guys know how damn picky I can be when it comes to this stuff so the fact that I’m singing a group’s praises for pretty much never letting me down should probably make you sit up and take notice.

That is, if you haven’t already been paying attention to Ayumikurikamaki. I think the trio are fairly popular in the “western fandom”, at least in that a lot of people know the name and can probably name a song or two. That’s a step up from a lot of the stuff I cover on this site. Anyway, you’re not hear for this nonsense, you’re hopefully here to read a review so let’s get on with that.

You’ll forgive me if I don’t refer to “Ayumikurikamaki ga Yattekuru! Kuma! Kuma! Kuma!” by its government for the remainder of this review. I mean come on, that’s a super long title. Oh yeah, this is also Ayumikurikamaki’s debut album so that’s pretty cool right? If ever there was a jumping on point for a group it would be a debut album, or just albums in general. That’s what I think anyway, they’re a good collection of the highlights from a group’s history.

Speaking of highlights, there’s a lot of them on this album. If the prospect of having to go through all 12 songs isn’t instantly appealing to you then allow me to make some suggestions. As far as I’m concerned, you can’t go wrong with any combination of “Jet Kuma Star”, “Honey Honey Honey”, “Shake Shake Shake” or “Nakimushi Hero”, the first and fourth in that list being my personal top Ayumikurikamaki songs.

I think if you’re looking for a group of songs with some good energy and well constructed hooks then “Ayumikurikamaki ga Yattekuru!” is probably something you’ll be interested in. There’s a lot of charm going on on the vocal side of things and the rock-based instrumentals provide a nice contrast. There’s a lot of stuff to like here, but the album isn’t completely without its flaws.

For me, I think the most disappointing aspect of this album is the three new songs. These are “Starlight Jamboree”, “War Cry” and “What’s My Name?” Considering these would be the main hook for current fans of Ayumikurikamaki, that’s a bit of a problem I suppose. I’m not really sure why, but none of the songs really connected with me. It’s not like they’re bad either, they’re just not that spectacular.

“Starlight Jamboree” sees the group try to mix in some folk elements to their usual sound. There’s like banjos, tin whistles and other such things going on and to their credit, it is different. Actually, now that I think about it, this is totally a PASSPO sounding song. Like I said, it’s perfectly okay but I wouldn’t really go much higher than that.

“War Cry” also has a lot going on. There’s some ska influence, rapping and it’s all tied together with some hard rock. This is closer to your typical style of Ayumikurikamaki song, but with more bells and whistles (not literally). It’s fine but there’s so much going on in the instrumental that it kinda overshadows the vocals. That and the whole thing is pretty by the book. Still, like I said it ain’t terrible or anything.

“What’s My Name?” is probably my favorite of the new songs. Again, it’s in the Ayumikurikamaki style and there’s some decent hooks involved which is always good. That being said, I feel like this song would come across much better in a live setting. It has all the spots for crowd call-outs and they’re VERY obvious. Not really sure if there’s even anything you’d want to or can do about that, maybe they could have got a “simulated” crowd to do the call-outs instead of the girls or something.

Maybe it sounds like I’m being too harsh on this album. Hopefully it didn’t come across like that, because I really don’t think any of the songs are horrible or anything. The old stuff is great if you ask me, but I felt kinda let down by the new songs on offer. I have pretty high expectations for an Ayumikurikamaki song though so your mileage may vary. Definitely don’t avoid the new songs just because I’m lukewarm on them.

Oh yeah, while I’m here I just want to make a PSA and point out that there’s 2 “full” versions of this album (Limited and Regular) as well as a 6 song sampler type deal. I have no idea why they chose to do this and it doesn’t even have all of the new songs, but I’ve seen a couple of people get confused so I thought it would be a good idea to mention it. Man, I thought samplers went out of style in the 80s, guess all this retro stuff really is making a comeback.

I doubt we’ll see anything else on the CD side of things from Ayumikurikamaki until much later in the year. They’ll probably be busy promoting this album by putting on fantastic live shows. You should totally check them out, either in person or on Youtube. You definitely won’t regret it.