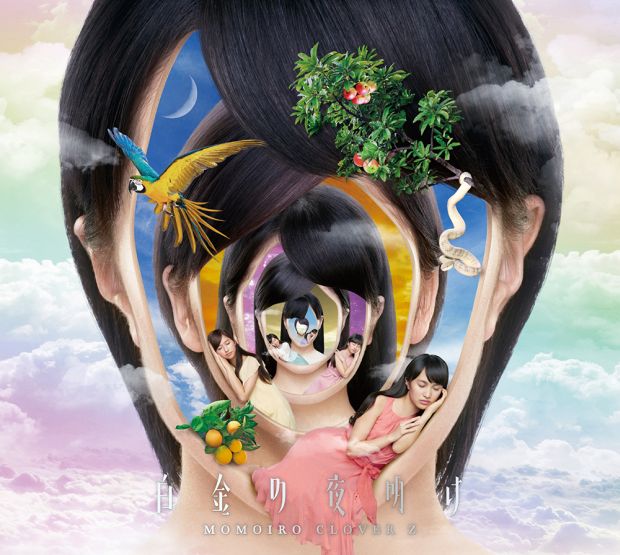 My thoughts on the second half of Momoclo’s new album double-header.

If you didn’t catch my review of “Amaranthus” which went up last week, feel free to head over here and give it a read if you have the time. If you don’t have the time to do that, it’s all good, we all have busy lives and reading a long text review probably isn’t high on the priorities list. All you really need to know is I thought that “Amaranthus” was alright, but it didn’t really wow me and make me want to come back for more.

With that being said, my already low expectations were lowered even still coming in to my first listen of “Hakkin no Yoake”. I mean, I figured the albums would have some defining features, but it’s still current era Momoiro Clover and a bunch of big name producer types. The chances of this album taking a massive swerve in another direction were pretty low in my mind going in.

So I hit play on the album and to be honest, I was kinda surprised with how things started out. I definitely did not expect some chill, spacy sounding songs on a Momoclo record, so they got me there. It’s still not the kind of thing that I’m listening to Momoiro Clover for, but it was pretty decent stuff. Off to a much better start than “Amaranthus” for me but still, my expectations remained low.

From there, things kinda go off in a multitude of different directions. You can kinda tell that a lot of people had a hand in composing this album because there’s all manner of different genres of music going on here. There’s some folksy stuff, some funky stuff, rapping, pretty much any “big” music genre you can think of, they’re all in there.

I’m still not sure how I feel about taking such a scattershot approach to putting an album together. I mean, I’m not expecting some grand concept album ala “5TH DIMENSION”, as great as that album was. I just think this album comes across as a “jack of all trades, master of none” kinda deal. There’s nothing really bad here, except for “ROCK THE BOAT” which is probably one of the most pointless songs I’ve heard in a while, there’s also nothing great either.

On the whole, I feel like this is the much more experimental album of the two. It takes a few more risks and I can’t deny that I definitely found it to be the more interesting to listen to. That being said, “Hakkin no Yoake” also contains a lot of the same problems that I had with “Amaranthus”.

There’s still a lot of ballads in there, which are just never going to do anything for me. I do feel bad for knocking an album just because it has multiple ballad-y songs on it, but I’m not a professional reviewer and this is all just my opinion anyway. It’s not like they’re terrible songs or anything, I’d just probably skip them nine times out of ten.

Another thing that kinda cooled my opinions of the album is the fact that there’s three Momoclo singles on here that I’ve just never been able to get excited about. They had to go somewhere I guess, but that’s practically a quarter of the album filled up with songs that are auto-skips for me. Them’s the breaks I guess.

The album is also lined up at the soup kitchen, begging for a hook handout. I don’t know what’s going on here, but I find it incredible that out of all of the production talent involved with both albums, no one appears to be able to write a strong hook to save their lives. I’m not even talking about some crazy Momoclo hook of old, just anything memorable please.

It’s not all bad though, like I’ve alluded to the album does have its moments. They’re mostly confined to the first couple of songs and very last song on the album, but they are there. There’s also flashes of inspiration in-between, but like with “Amaranthus” they’re usually small parts of a larger song.

Again, it’s not like this is a terrible album or anything. In fact I’d say that I enjoyed it a bit more than “Amaranthus”, I don’t know if that’s the popular opinion or not but it’s mine. It’s still pretty forgettable though, and I’m not sure I’ll be rushing back to it anytime in the near future.