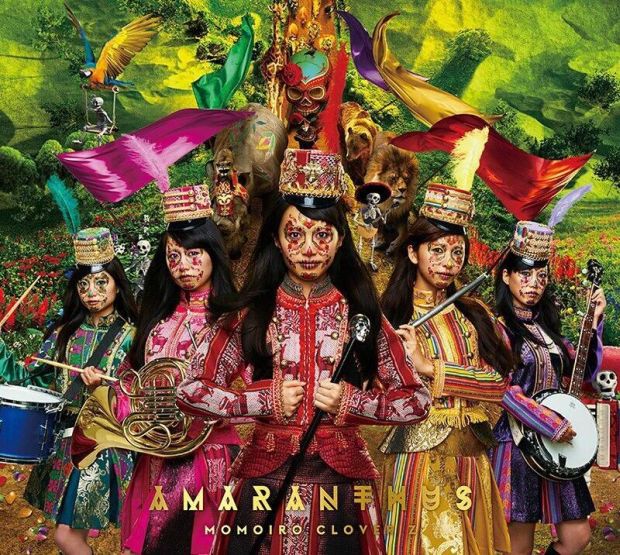 My thoughts on the first half of Momoclo’s new album double-header.

So before I get into this review, a little bit of backstory. I’ve been a fan of Momoiro Clover since way back in the day, I’m talking about 2010/2011 Battle and Romance era Momoclo here. That’s a good 5 or so years at this point, a pretty decent amount of time to have an interest in something. I’ve seen Momoclo go through a lot of changes and grow up as a group, so hopefully you can see where I’m coming from in this review.

I’ll be honest, the past, I want to say year or two hasn’t been my favorite period of Momoclo from a musical standpoint. There’s been a couple songs here and there that I thought were good, but by and large there’s been a lot of misses. That’s just my opinion of course, I’m sure there are plenty of people out there who have loved what Momoclo have been releasing of late. Everyone has their own opinion on something as subjective as music.

That being said, I definitely did not go into this album with my hopes being very high. I think I kinda get the direction that Momoclo are heading in at this point, what with the maturing of their sound, image and all that. They’re not kids anymore, so I guess hoping for or expecting more material in the vein of “Mirai Bowl” or “Pinky Jones” is just me asking to be disappointed. Still, just because their style has changed shouldn’t mean they’re incapable of producing some songs I like, right?

So I sat down and I gave this album a pretty fair shake I think. Several listens over a couple of days to let everything sink in and to make sure I liked what I liked and I didn’t like what I didn’t like. No snap judgements here folks, oh no. Totally serious and professional reviews around these parts.

Anyway, I’m going to come right out and say it, I don’t love this album at all. There’s a lot of things that kinda don’t do anything for me, which I did half expect coming in. I didn’t buy into the hype of them having all of these big name musical types working on each song from the get go, so I avoided crashing that hype train at least. I think it came in about where I expected it to if I’m being honest.

Most of the songs feature the typical, recent Momoiro Clover style of singing which is something I just don’t care for. I kinda feel like it makes a lot of the songs sound really similar to each other, which kinda blows my mind considering the vocal talent in the group. I guess it’s part of their identity or brand going forward though, so I doubt it’s going to change much on future releases.

Another thing I didn’t enjoy was the abundance of ballad-y type songs on the album. From my notes here I think I counted three or four, which is probably two or three too many for my liking. They weren’t bad songs or anything, but I don’t like ballads and I certainly don’t listen to Momoiro Clover to hear them sing ballads. Again though, I kinda expected it going in so I guess it’s not a huge surprise.

That’s not to say I hate everything about the album though, that would be a pretty unfair thing for me to say. I guess the unfortunate or maybe I could even go as far as to say frustrating thing was, none of the things I enjoyed took place as one or multiple complete songs. Instead, I’d find myself enjoying an instrumental part here, a lyrical lick there, but they never came along together for some reason.

In fact, I don’t even hate anything about this album, except maybe “Saboten to Ribbon”. Even if I don’t really like that much that I listened to, I can still tell that the songs are perfectly fine pop songs with various twists thrown in. I think anyone would be pretty hard pushed to deny that.

The problem I’m having is that nothing I listened to gave me any reason to want to come back to this album again after the ink has dried on this review. Give it a few weeks and I’d also probably be hard pressed to tell you how most of the songs go. As you can probably tell from this review, I also don’t have any particularly strong feelings about it either. It’s just kinda there I guess, which I guess could be worse than me outright hating it, depending on who you ask.

So what’s my main takeaway from listening to this album? I think “alright” probably sums up my feelings in a nice little one word answer. The album has its moments, often buried in the middle of some otherwise fine songs which is a shame I guess. Don’t get me wrong, all of the songs are very okay pop songs. There just wasn’t really any that stood out, loud and proud and stuck in my head. This album lacks hooks big time, something I’m pretty sad to say about Momoiro Clover.