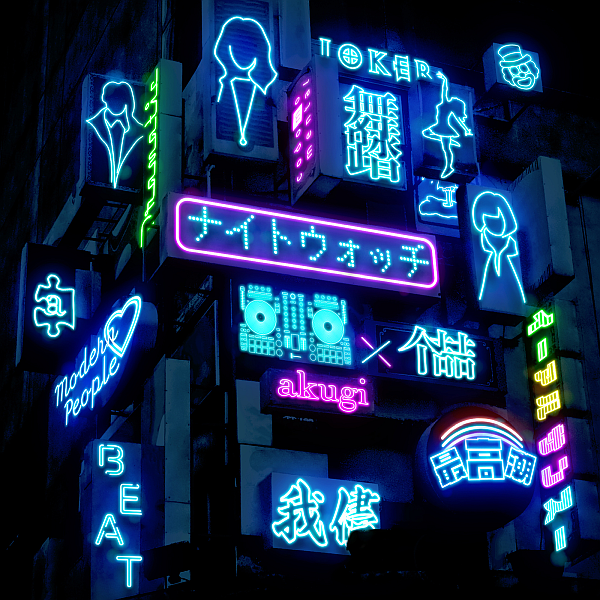 Some thoughts on “Night Watch”, the recent collaborative single between akugi and Kotetsu from Zenbu Kimi no Sei da.

codomomental has been a mainstay of the Idol scene for such a long time now that for a lot of people it’s probably hard to remember a time when they or one of their groups wasn’t playing a prominent part in pushing the scene forward…even if they do tend to stay within the confines of their own bubble a lot of time. I don’t think anyone can really argue that the company as a whole isn’t a big player at this point and there’s no denying that their groups have put out some very memorable releases over the years.

All that being said, and as I sit here towards the end of 2021 I kinda think to myself that time is a bit of a double-edged sword. codomomental have certainly stood the test of it for a long time but in the past year or two I do rather feel like it might have been catching up to them. Lots of upheaval, not really pushing the envelope too much musically and some less than inspired debuts knocked some of the wind out of their sails, certainly for me and I know for a few others as well.

Then along came akugi, something of a not so very serious side project for a few of the members to have a creative outlet that they weren’t otherwise getting in their own groups. It wasn’t really supposed to be much of anything but lo and behold here we are and at least for my money the group and its revolving door of featured artists have been putting out some of the more interesting codomomental material in a while. They’re back with another new track in “Night Watch”, featuring Kotetsu from Zenbu Kimi no Sei da, and if it’s half as good as some of their past offerings then I think they’ll probably do just fine out of this one too.

Despite the cover conjuring up all manner of Neo Pop ideas in the mind “Night Watch” instead opts for something a little more on the classy side with a Lounge inspired instrumental which hits on all of the expected notes to create a very warm, rich sort of tone to things. Where the track really sets itself apart though is with the incorporation of various synthesizers, beats and other elements of Electronica to have us end up with this really cool, contemporary but also at the same time quite nostalgic sounding arrangement that mixes old with new quite seamlessly and that makes for quite the compelling listen in its own right.

I think vocally is where this one is either going to win a lot of people over or put a lot of them off. There’s a lot of influence from Hip-Hop and Rap with how the lyrics flow and are being delivered and not much of the smoky, rich Lounge flavor that I and I’m sure many others like from this type of genre. I don’t mind this fusion personally but I’m able to look at it as just that so maybe that helps a bit and I thought Kotetsu added quite a bit of melody and brightness to everything with her very distinctive singing voice. A little bit different sure, but sometimes that’s not a bad thing at all.

akugi remain one of codomomental’s more interesting projects and it’s not really that difficult to see why. They have a lot more creative freedom and don’t appear to be pigeonholed into the tighter genre constraints that the agency’s main groups are so you can have songs like this and a whole lot more variety besides. Maybe not all of this stuff is for everyone all of the time but chances are something will be and I do appreciate the mild surprise factor that comes with each track that akugi puts out.

Despite being a bit tepid on current codomomental output, I really do appreciate the fact that they let a project like akugi exist. A lot of other companies probably wouldn’t and it gives everyone involved from the members to the production team a chance to flex their creative muscles and I think the results really do speak for themselves. I still sorta think there’s going to be a time when this becomes an “official” thing and we’ll cross that bridge when we come to it. For now though I’m loving what they’re doing here and long may it continue.