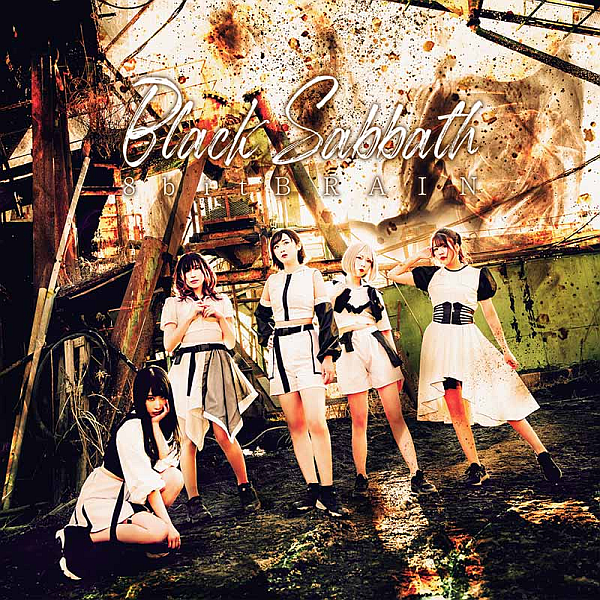 My thoughts on “Black Sabbath”, the third single from 8bitBRAIN.

A lot of the time when I’m writing about something on the site I might mention how I feel like a particular group feels like they’re rather underrated to me or how people reading the article should go check out a particular song or two. I don’t really think most people pay too much attention to that sort of thing, or much of anything else I say these days for that matter but it still makes me pretty happy when I see a group that I’ve said such things about eventually start to catch on with a few more people than before. It doesn’t happen often but it’s pretty cool when it does.

8bitBRAIN are a group that I’ve written about a couple of times on the site now since they got picked up by a label and started to distribute their music more widely. They have that sort of Digital Hardcore sound that is incredibly popular right now so the fact that it took this long for the group to catch on was somewhat surprising to me but people got there in the end. The group also brings in elements of Rock, EDM and other ancillary genres to give a bit more variety and round out their sound but yeah very much playing in that Hardcore with various digital synthesizer elements toybox up until now it would seem.

“Black Sabbath” is the group’s third single since being picked up by their label and no, this isn’t going to be some love letter to Ozzy and the boys before anyone starts thinking anything like that. I’d imagine it’s going to be more of the sort of stuff that we’ve been hearing out of 8bitBRAIN thus but who knows, maybe they will surprise us and we’ll actually get a Sabbath style tribute in here. I wouldn’t bet any money on it personally but hey, stranger things have happened in the past. With that said though, let’s get this review rolling and see what’s really in store for us on this particular outing.

Just like I predicted, the single’s title track is not in fact a tribute to the great Black Sabbath but something else entirely. A very melodic opener here by way of some keyboards and ambient synthesizers providing a nice range of melodies and some heavily vocoded vocals really driving the bright, melodic nature of things home as if everything else wasn’t already doing just that. It’s actually coming across like a bit of a Ballad, though a Ballad with plenty of bells and whistle attached to it and even some faint harsh vocals which are sort of off doing their own thing in the background a lot of the time which I thought was a pretty interesting approach. Not exactly a crazy Digital Hardcore banger by any means but the track does still have a very appealing energy to it and especially so in the choruses where it feels like things really take off and bloom into this very powerful melodic performance that definitely stands out as a highlight of the song. There’s also a pretty intense breakdown about midway through the track which lets the harsh vocals get a bit more of the spotlight while clearing the air bit at the same time. There’s a nice gritty texture and intensity to it which I rather liked but it does differ vastly from the rest of the track so be prepared. Yeah, a nice Ballad-y track with a few extra components added into the mix to keep things interesting, what’s not to like.

While each of the single’s 3 versions features a different b-side (unless you go the digital route), “SeNSe oF GuiLT” is one that features on all of them. There’s a little bit of a Trance vibe going on during the opening moments of the track before they bring in a more substantial drumbeat and some harsher sounding synthesizers to give the track a bit of an edge but I did quite like how things were sounding there, however briefly it was. The vocal treatment is pretty similar to that of the previous track, very vocoded but also highly melodic and pretty much what you’d expect from this style. The big difference is that on this track the harsh vocals really get let out to play and we get some pretty cool stretches where things get a bit more brutal than that opening instrumental might have you believe. I’m not entirely convinced there isn’t some post-production magic going on here but it sounds pretty good for what it is anyway. I suppose all of this puts the choruses in the unfortunate position of being just a bit…dull isn’t the right word but they’re very safe and expected with their soaring melodies and heavy use of vocoding. Nothing bad by any means but it feels like other elements of the song are upstaging them a bit. Still, a pretty fun one that all of you harsh vocal, Digital Hardcore loving types are probably going to have a pretty good time with so be sure to check it out.

If you purchase the Type-A version of “Black Sabbath” then your exclusive b-side of choice is going to be “Why fight!?”, a question I find myself asking a lot these days as I scroll through social media. The track itself is a very glitchy take on that EDM meets Rock sort of style that kinda had its moment for a year or two there and still likely finds quite a bit of success for itself these days too in all honesty. There’s a little bit of harsh vocals sprinkled throughout the track but they’re pretty light both in tone and quantity so it shouldn’t put too many people off if that’s not really their thing hopefully. Though the breakdown in the middle of the track where things get a bit rough and rowdy might be a bit less easy to ignore but once again it’s pretty nice display of harsh vocals and added a few more tones and textures to break up the bright synthesizer digitalness a bit. The choruses here are again a bit uninspiring but only in the sense that they’re pretty much exactly what you’d expect to hear so if that’s not a problem for you then there’s really nothing else bad to say about them as far as I’m concerned. A little bit similar to the previous b-side if we’re being honest but I think 8bitBRAIN also do quite a bit to give each track its own personality and sound even if some of said things might be a bit too subtle to really pick out at a glance. Still, some good stuff going on here for sure.

I’ll be honest, I wasn’t really sure what “Drink it up!” was trying to be exactly when the song first started playing as it feels like it tries to go running off in multiple different directions in a very short space of time. You’ve got this sort of dreamy melodic stuff, Piano Pop, stompy Rock and then Digital Hardcore all in quick succession and it does sort of leave your head in a spin, at least that’s how I felt anyway. The track eventually settles into this Ballad-y style which I didn’t see coming at all, with a bit of Digital Hardcore and some screaming cropping up every now and then to contrast the brighter, more melodic nature of the majority of the vocals and the instrumental. It’s a bit weird at first, but the instrumental has a pleasing kick to it and the lyrics are rather catchy too which goes a long way to pulling you back in. The choruses are a bit less colorful by comparison with their pretty straightforward vocoded Pop treatment but still perfectly pleasant to listen to. There’s also a pretty brutal sounding breakdown in the track’s bridge which I thought was cool and is a clear highlight here as far as I’m concerned. If any of this sounds appealing to you and you aren’t fully onboard the digital bandwagon yet then the Type-B version of this single is where this particular track resides.

Which brings us nicely on to “I’d like”, the final track to feature on this release and if you haven’t figured it out already then you’ll be looking for the Type-C version of the physical release for this one if CDs are still your thing. There’s a pretty heavy Chiptune vibe to this one so you can’t really say we haven’t been getting a nice amount of variety on this single and the first vocal salvo we’re treated to is another round of impressive harsh vocals, so hopefully you’ve been enjoying those so far as there seems to be plenty more on offer here too. The more melodic vocals on the track are sung in a very pleasing, soft tone which was a pretty good call given how rough and grainy a lot of the rest of the track feels and it also gives plenty of room for them to spread their wings like during the choruses, though of course with the helping hand of a bit of vocoding because that’s pretty much expected at this point from 8bitBRAIN. That’s pretty much the story of the song honestly, an energetic Chiptune laced instrumental backing a pleasing melodic vocal performance that has some harsher moments crop up every so often to keep the listener on their toes. Perhaps not quite as flashy as some of the other b-sides on offer here but this one is unique in its own way and still a really fun listen if you’re into the genres involved.

“Black Sabbath” is another really solid single from 8bitBRAIN and it’s cool to see that the group is continuing to grow in popularity. They definitely have a base sound that they’re comfortable with but as you can hear on this release they’re more than happy to pull in a complimentary genre or two for some variety on a regular basis. The vocoding does feel a bit overdone at times though I’ll give you that, but I guess that’s sort of what you’re signing up for with this style of music. Not exactly reinventing the wheel here some pretty fun songs to jam to for sure.

I suppose that’s the one thing I kinda want from 8bitBRAIN at some point in the future, for the group to maybe rely a bit less on the vocoding and Digital Hardcore tropes and go for something…unique isn’t the word but maybe “less explored” is. I know it’s Idol a what have you so I shouldn’t expect much but I do feel like genre fatigue is a risk for this and other groups plying their trade using the style of music that they do. My opinion doesn’t matter though and for now at least the songs remain fun so I’ll shut up and just enjoy the music instead of trying to overthink things like I do most of the time.

Enjoy the content? Consider supporting the site on Ko-Fi for as little as £1.
8bitBRAINsingle reviewTeichiku Entertainment
0 comment
FacebookTwitterTumblrRedditEmail