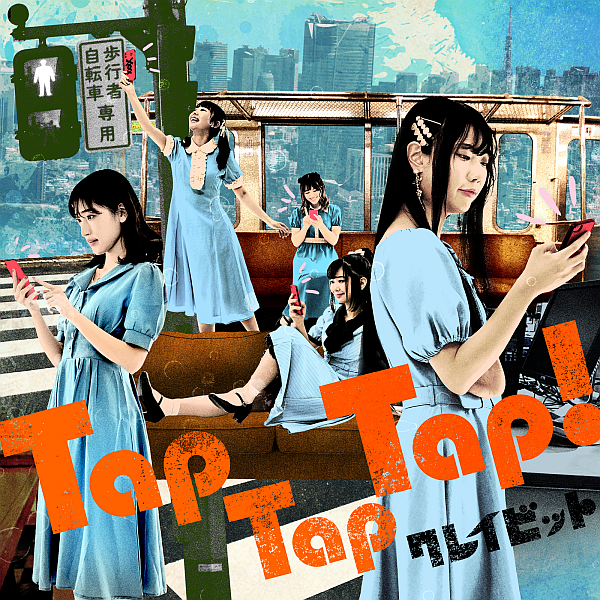 My thoughts on “Tap Tap Tap!”, the first single from Craveit.

I think one of the cooler and perhaps less appreciated aspect of the underground Idol scene is the fact that there are pretty much no rules when it comes to what sort of music a group can choose to release. Granted there are many genres that are more successful than others but the fact remains that if you’re a producer out there with an idea and a group of girls willing to buy into the cause then you can pretty much make your idol group be whatever it is that you want it to be.

Take Craveit for example, they’re a new up and coming group who have been around for a little over 6 months or so at the time of the release that we’re going to be talking about here today. Their genre of choice just so happens to be Electro Swing, not something totally new to the world of Idol but still not the most common of genres out there that’s for sure. Still, that’s what the 5-piece are going for and we’ll see how it goes, though without having even listened to any of their music yet it does seem like they’re off to a pretty decent start all things considered as far as playing shows and all that sort of stuff goes.

Back to the music side of things though and today we’re going to be taking a listen to “Tap Tap Tap!” which is Craveit’s first ever single so it’s going to be pretty much everyone’s first introduction to what the group is all about. Electro Swing is probably going to be a bit of a hard sell on a lot of people who read this site but maybe you’ll stick around for a song or two anyway just to hear what it’s all about if nothing else. I’m looking forward to checking this one out, so let’s take a listen to what is hopefully going to be a fun old time and introduce ourselves to Craveit and what they’re all about.

The single’s title track “Tap Tap Tap!” definitely lives up to its name, settling into a very nice Swing style instrumental after a little bit of a slow start to things there. Horns, piano, bass and various other instruments are all brought together to create a smooth, flowing arrangement with a toe tapping beat that has a pretty strong Jazz or Lounge feel to it if I’m trying to explain it to someone who might not be overly familiar with just what Swing typically entails. Very representative of the genre by Craveit and their producers which should probably have been expected since you have to start somewhere after all and you probably don’t want to go taking a ton of risks or artistic license when you’re just starting out either. Vocally things are also pretty much what you’d expect out of the Swing genre, with the members of Cravit really nailing the required cadence when it comes to delivering their lines, which helps make the track feel just that little bit more authentic. While not aggressive by any means, the lines are all rather punchy and bouncing along to the beat of the instrumental rather pleasingly. They also haven’t done too much work in post production either so everything comes off sounding rather natural in tone which I for one appreciated and I think it helped with the overall tone of the song too in a lot of ways. A pretty solid introduction to this group for many I think.

Following on from that we have our b-side “Oyasuminasai! Salieri-chan” which is a kinda interesting title and I’m taking a total shot in the dark here but perhaps it is in some way a reference of Antonio Salieri the Italian composer? In any case I think this track is perhaps a little bit more contemporary in nature than the previous one, bringing in more synthesizer elements to the composition and also going with a more flashy Pop beat to set the tempo. It probably won’t please the one or two Swing purists out there who may stumble across this somehow but I think this is a logical place to take things as an Idol group and it should help to break any kind of stigma of this being “old people music” or whatever the kids say these days. We get treated to some nice, smoky vocal tones on this one which was cool to hear to get a bit more of an idea of the group’s range and it works really well with the mood being crafted by the instrumental. I did feel like things were a little bit repetitive for a few stretches of the track but they also worked in a few pretty interesting instrumental and vocal moments here and there and they did feel like more of a highlight as a result so I suppose there’s something to be said for taking such an approach. Pretty different to “Tap Tap Tap!” while also playing in generally the same ballpark as far as genres go so if the last song was a bit too stuffy for you then maybe give this one a go and see if it lands any different.

“Tap Tap Tap!” delivered pretty much what I expected of it when I first heard about Craveit and what they were trying to do musically. The title track is a great example of the Swing genre as many will know it and the b-side shows that the group aren’t afraid to add some more modern twists to the genre to appeal to the current trends in music. On the whole it’s a very enjoyable single making use of a genre that we don’t hear too often in the Idol scene. For that alone I think it’s well worth taking 10 minutes out of your day to check it out and experience it, even if it is only once.

I suppose that’s the real hurdle that Craveit are going to have to overcome to really succeed as a group. Swing isn’t really seen as this popular, hip thing and the genre itself does also present some limits to just how far you actually can push things before they just don’t work anymore. That said, I look forward to seeing/hearing how they navigate all of that and I hope that we won’t have to wait too long to get another track or two out of them as a lot of what they are doing here is stuff that I personally rather like, so I wouldn’t mind hearing more of it here sooner rather than later.

Enjoy the content? Consider supporting the site on Ko-Fi for as little as £1.
Craveitsingle reviewStudio316
0 comment
FacebookTwitterTumblrRedditEmail