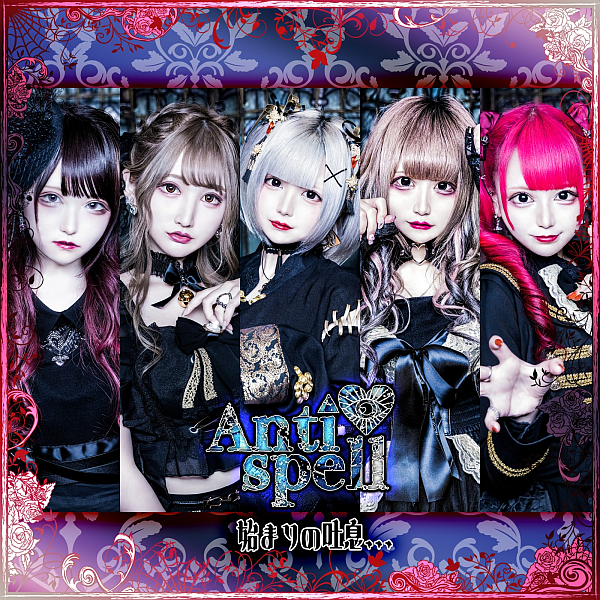 My thoughts on “Hajimari no toiki”, the debut EP from Antispell.

Starting up any kind of new business right now must be a pretty daunting prospect, what with things continuing to be the way that they are and everything. Probably even more so when the business in question is also an Idol group that is trying to find its footing in what is a very tough scene at the best of times. Still, there have been quite a few new groups popping up this past year and attempting to make a go of it, and when one catches my eye I do like to try and feature them a bit on the site if I can.

Antispell are one such recently formed group, having only just made their debut this past November. As such, they’re still considered super new even by Idol standards but the 5-piece do have something of an advantage given that each of the members has a very large social media following already from what I can only assume are the usual sort of outside activities that Japanese girls active in this space tend to have these days. Hardly starting from nothing then, but just because you’re popular doesn’t mean that your group is going to flourish, right?

“Hajimari no toiki” is Antispell’s debut…I’m going to call it an EP since they don’t really specify, and it features 3 tracks so we should be able to get a pretty fair idea of what the group’s music is going to sound like from that. Their Gothic image kinda makes me think something along the lines of that Hard Rock verging on Hardcore/Metal style that’s popular these days but who knows, maybe they’ll pull something out of the bag that will surprise me. I honestly don’t have much more to go on right now than that though, so let’s hit play and see just exactly what we’re dealing with here. Hopefully it’s something cool but we’ll have to see.

Well, things get off to a fairly predictable start on the EP’s lead track “High Collar Girls Melt Up” with a synthesizer tinged, Metal inspired instrumental being the order of the day by the sounds of things. There’s some nice bite to it and the drums are packing a good amount of punch but it’s kinda one of those things that we’ve been hearing a lot of lately so your enjoyment is likely going to hinge on just how much more music in this sort of style that you actually need in your playlist, life, etc. There’s some interesting guitar work throughout the track at least, though it does get a bit buried under the drums and general distortion that’s a very upfront feature here. That said, it’s definitely adding a bit more to the overall composition so it’s more than welcome and the breakdown of sorts towards the end of the track was another pretty cool moment too I thought. Vocally speaking I feel like it’s a bit of a mismatch in some ways, though everyone involved does put in a fairly decent performance. It just seems like this style of music doesn’t necessarily compliment the group’s vocal abilities so the tone ends up being a bit too Poppy in nature and there just isn’t quite enough power behind the delivery to compete with the very dominating nature of the instrumental. There are some nice melodies though and some of the lyrics are decently catchy but at the end of the track you are sort of left feeling like things didn’t quite mesh as well as they could have if they’d gone in a slightly different direction with a few things. Probably a bit harsh since most/all of these girls likely aren’t highly trained singers in the first place but I just have to give my opinion on what’s put in front of me and this track is alright but not the greatest thing I’ve heard in this genre of late.

Up next is “Juu-nana gatsu no shūmatsu ni okeru jikan-jiku to neji tokei”, which is a bit of a mouthful as far as song titles go I must admit. The track starts out with a pretty punchy Metal style instrumental with a light dusting of synthesizer to take some of the rougher edges off. It’s pretty dense sounding and there is something of a Digital Hardcore vibe to things but I think the way that they used the synthesizers definitely helped to compliment the pitch of the vocals a lot better than what we heard on the previous track, so there’s definitely an improvement there right off the bat. Things also mellow out a good bit as the song gets going, practically turning into an acoustic style in places which is not the sort of thing I was expecting when I first hit play here. It works pretty well with a lot of the more Ballad-y vocals that feature on the song though so I can see what they were going for here in that sense. This one is likely going to be a much more accessible listen than the lead track, if you can make it past the opening salvo of drums and such at least and once it gets turned more towards a Pop sort of direction things become very catchy from both an instrumental as well as a vocal point of view and once again there are several instances of some rather nice lyrical hooks so this group can definitely write some nice material even if a couple of the execution decisions might not work quite as well as you’d hope. I’m not sure we quite got what was initially advertised here but I’m still pretty happy with the end result and if you couldn’t tell I enjoyed this one quite a bit more than the previous track so there’s that too.

Closing out this debut release is a self-titled track in “Antispell”. If you know me then you know my quirk with songs named after groups is that they should ideally be a pretty decent representation of what the group’s music is all about because otherwise what’s the point, right? That’s how I choose to look at it anyway, but you’re more than welcome to disagree. Well in this instance I’m kinda left scratching my head a little bit because this track definitely goes in a much more Pop leaning direction, with quite a bit of piano involved with the instrumental, which I’m quite partial to as you know, but this one is far from being anywhere near as heavy as the last two tracks. The vocals are also pushed much further forward in the mix too which I can get behind because you can hear all of the members’ singing much clearer and they do a good job so nothing to really complain about there, especially when you factor in the rather ear pleasing chorus and the several other little lyrical hooks sprinkled in along the way. There’s a couple of instrumental parts I don’t particularly care for though unfortunately, one such being this really annoying synthesizer swoosh that really just does not sound good any of the times that it shows up which is unfortunate. The piano maybe doesn’t mesh quite so well with the rest of the instrumental a few times too but I had to really be paying close attention to even pick that out so it’s probably not that big of an issue in all honesty. On the whole this is a pretty fun song, though I’m not sure how representative it is of the group’s sound as a whole as it doesn’t really have much of any of the group’s heavier dynamic. That’s just my opinion though of course.

Antispell join an ever growing list of groups trying to give us their take on mixing heavier genres of music with synthesizers and other Pop sensibilities. “Hajimari no toiki” probably isn’t going to offer you much that you haven’t heard before if you’re a keen follower of this trend but generally speaking the songs are pretty decent and offer a fun enough listen for your time. It’s really just going to depend on how much more of this style you need/want in your life.

That being said, Antispell are still a super new group so how things develop from here remains to be seen. The vocals have a nice charm to them and their producers can write song catchy lyrics so they’ve got a pretty solid base to build from in that regard and if they tighten up the instrumentals a bit more then everything will sound even better I’m sure. Given the girls’ social media popularity though they can likely do pretty much whatever they want at this point and they’re likely to find a decent of success either way so we’ll see I suppose.

Enjoy the content? Consider supporting the site on Ko-Fi for as little as £1.
AntispellMini-Album Reviewsensitive.inc
0 comment
FacebookTwitterTumblrRedditEmail