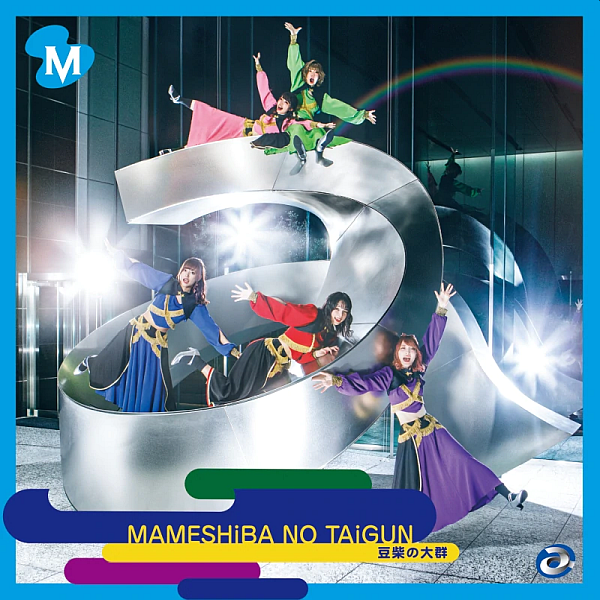 My thoughts on “AAA”, the major label debut single from MAMESHiBA no TAiGUN.

Having been a fan of WACK in some form or another since pretty much all the way back in the very beginning (before WACK was even really a thing actually), it’s a bit weird for me to look at the project in 2020 and see just how far things have come. Who would have thought that the edgy, anti-conformist gimmick that BiS started out with would spawn so many other groups who would tweak that same template for their own purposes. Though at this point given how much mainstream success WACK is enjoying it does seem a bit counter intuitive to hold onto such ideals, and increasingly more difficult to maintain their authenticity.

Then you have a group like MAMESHiBA no TAiGUN, easily WACK’s most commercially successful product to date and even more so than what many consider to be the agency’s flagship in BiSH. The numbers don’t lie though folks and no matter what the platform is this group is absolutely crushing it be it in views, followers or any of the other metrics that we use to determine success and value in 2020. Spinning the group out of a high profile, nationally broadcast talent show definitely helped get things off the ground but you have to maintain that sort of hype and momentum and it would appear that so far MAMESHiBA no TAiGUN have been able to do this rather effectively.

The rather simply titled “AAA” is the group’s major debut single and comes several months after their debut album “Start” (review here) so by conventional standards they’ve sort of done this whole thing backwards, but then this is WACK that we’re talking about isn’t it? In any case, I rather enjoyed the group’s last release and a lot more than I initially anticipated at that. As such I’m coming into this review with some pretty positive vibes and raised expectations which is usually a recipe for disaster as far as these things go but I think a WACK group is just about enough of a wildcard that it’s worth it to take such risks. I suppose we could start the review and find out just how rightly or wrongly placed my newfound optimism is, how does that sound?

Opening track “Samabari” is a bit of a blast from the past, especially if you’ve been into this whole Idol thing for as long as I have. The middle-eastern style of the song’s opening instrumental had me vaguely thinking of old school Hello! Project and then when the track shifted into this more uptempo Pop number and all of the “sore sore” stuff started happening it really did feel like I’d been transported back in time to the mid-2000s. When actual, proper vocals eventually make an appearance the song downshifts into this more somber Ballad style which I thought was an interesting decision but you can tell that all of that energy is bubbling away in the background just waiting to burst through once again when the opportunity presents itself. It’s not so much one specific moment but as the song progresses they slowly build things up bit by bit, boosted along each time we hit a chorus, until by the end of the song everything is in full flow and it feels like there’s a pretty cool party going on. I’m a bit conflicted on the vocals in this regard I suppose, as they don’t exactly match the eventual energy or enthusiasm that the track is giving off and at times they sound a bit too gloomy for their own good, even if I did like the tone and flow generally speaking. They of course have their moments but it ended up feeling like two conflicting styles trying to work together and not clicking as well as if they’d hammed things up a bit more. All that said, the lyrical content is quite catchy and I do love the throwback to my earlier days in the fandom so there’s definitely plenty to like here for me. It’s just hard not to feel like things could have been a bit more energetic and exciting to really put the track over the top.

Well I did say I wanted some more energy and enthusiasm so I guess MAMESHiBA no TAiGUN were just saving most of it up for this single’s second track “Koi no Kakezan ABCDEFG” which opens on a very upbeat, sparkly note with a whole lot of cheering and other such feelgood type things going on in addition to the instrumental. I did read somewhere that this single was supposed to be being marketed more towards kids for some reason and I can definitely see where that might be coming from early on this track. Things settle down a bit as we move into the verses, though the Piano Pop instrumental that’s featured here does a nice job of maintaining the energy with a pretty catchy, bouncing beat while the vocals are showing off a whole lot of personality and enthusiasm as they dance alongside it. It’s all very pleasant and fun stuff with several enjoyable melodies throughout that are sure to please anyone who is a fan of this style of music. The choruses bring a bit more of that initial energy back into the mix with the instrumental ticking up several notches to return to the sort of style and tone with which the song started and the vocal performance gets a bit more powerful too as a result. They still keep it all very friendly and playful sounding though, but you do appreciate the clear change in tone and tempo as it really does help to break things up a bit and perhaps most importantly of all make the choruses stand out from everything else going on throughout the track here. It still does get a little bit repetitive by the end though but this is supposed to be a fun, catchy, kid friendly sort of affair so in that regard I think they check all of the boxes. Not sure how appealing this one will be to fans of the usual WACK antics but they’ve definitely tried to do something a bit different here and I think that that should be appreciated regardless.

Rounding out the release we have our second b-side “Ima” which pretty much just translates to “now” so a fairly short, sweet and to the point title that they’ve got there huh? Definitely sounding like this one is going in a Ballad-ish direction early, with some pretty emotional guitar riffing accompanied by light keys to bring us into the track. I thought it sounded pretty nice honestly and bringing in the drums added a bit more of a tempo to it too. We keep this theme going, albeit a bit more muted, once the vocals are introduced too and it’s a pretty pleasant mid-tempo sort of performance from the MAMESHiBA girls, so if you’re into this sort of thing I can confidently say that you’ll enjoy this track. The choruses see things spike quite significantly in emotional energy, with the delivery of the lyrics becoming rather heavily charged which sort of cleared the air a bit in a way if that makes sense. Some pretty nice lyrical hooks on offer too by the way, which is something that can be a bit hit or miss in this style of song so they’re definitely get points for that here. Things sort of just float along between these two main styles for a bit until we hit the bridge and are treated to an epic guitar solo which leads into an emotion laden closing section that between those two things makes for what is quite easily the highlight of the track, though the choruses do come in a quite close second place. Kinda depends what you’re looking for here I suppose but I appreciate that WACK resisted the urge to do yet another Punk Ballad and instead gave us something a bit more along the lines of a Symphonic Rock style. Of course if none of that is your cup of tea in the first place then you’re going to struggle but I found myself enjoying this track quite a bit for what it was personally.

I’m not really sure about this whole “appealing to kids” thing that MAMESHiBA no TAiGUN are supposedly going for with this release but I suppose the kids of today are the consumers of tomorrow so if you can get them hooked early then that’s a pretty solid business plan. What I do know though is that this is a pretty enjoyable little single and they did actually try a few new things that you don’t normally hear from a WACK property and the results weren’t actually a disastrous, noisy mess like they usually tend to be. That has to be a win surely, at least in my book anyway.

I suppose this is the sort of luxury that can be afforded to the only other WACK group that can currently compete with and at times eclipse BiSH in terms of mainstream exposure and popularity. You can take a certain amount of risks to where we can occasionally get some fun results like we hear here, but you can’t really go off screaming into the wilderness like a madman so things don’t get too crazy at the same time. At least not yet anyway, this is a WACK group after all and maybe if MAMESHiBA no TAiGUN’s popularity continues to increase we might see Watanabe and the crew start to push the boundaries of just how much they can get away with a little more. Either way, the results should as always be rather interesting.

Enjoy the content? Consider supporting the site on Ko-Fi for as little as £1.
AvexMameshiba no Taigunsingle review
0 comment
FacebookTwitterTumblrRedditEmail