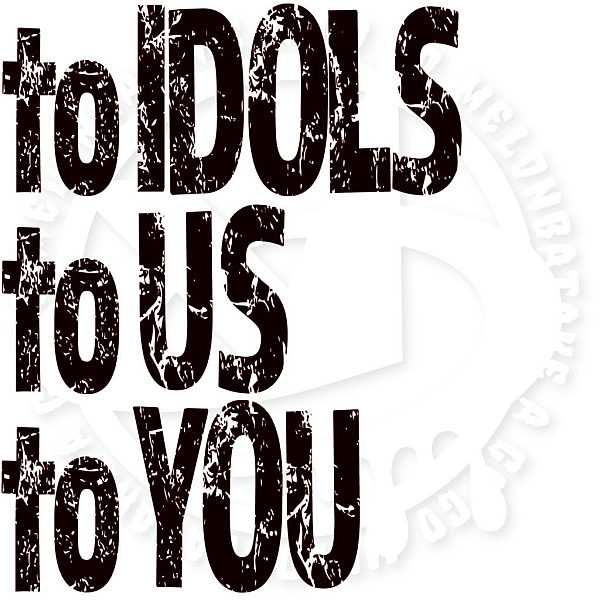 My thoughts on “to IDOLS to US to YOU”, the latest mini-album from Melon Batake a go go.

Bright spots have been fairly few and far between for much of 2020 so far but lately I have started to feel a sense that things are starting to get just a little bit better. Maybe that’s a bit naive of me, or perhaps I’ve just learned to appreciate the smaller moments more. At least as far as my Idol hobby is concerned things haven’t been a total disaster these past few months, with most of my favorite groups sticking around and now some are even starting to release some new music.

It’s not much of a secret that I’m a pretty big fan of Melon Batake a go go. I know that their Rockabilly meets old school Horror persona isn’t for everyone but it really ticks a lot of boxes when it comes to things I have a fondness for. Now, this Melon Batake is a bit different from the on that released their last single “FINAL GAME ~Idol of The Phantasm~” (review here), with the departure of Rukatama and the arrival of Tomoyo Chiyo and Amino Coromi from The Grateful a MogAAAz being a pretty big development in an otherwise COVID dominated year.

The group’s latest mini-album “to IDOLS to US to YOU” will be the first time that many will have heard this new line-up perform, certainly in a studio setting at least. Featuring 6 new tracks of what one would hope is the usual Melon Batake genius, though if you’ve been watching any of their live stream content over the past few months perhaps many of these tracks will already be quite familiar to you. As for me? It’s a Melon Batake release, I’m a pretty big Melon Batake fan, so I’m expecting to have a pretty good time with this one.

The mini-album’s title track “to IDOLS to US to YOU” gets things going here, featuring the “Gollipop All-Stars” too which I’m assuming is just a fancy name for the various members of The Grateful a MogAAAZ and whoever else involved with Melon Batake’s record label wanted to get in on the fun on this one. Well I say fun but it’s a bit of an ominous opening section with what sounds like a helicopter flying overhead as the song’s title is chanted out by some kind of congregation with rain falling all around us. Yep, sounds like something Melon would do…a very dark pep rally if you will. A very gothic sounding instrumental then begins to weave its way into the mix, providing much of the track’s melodies in the process and definitely adding to that unsettling vibe that has been developing. The tension keeps building until what I’m assuming are each of the members informing us that we’re family and that they’re here for us…forever. The track is snuffed out shortly after that but hey, that’s a nice happy way to end thing off and it left me with a warm feeling in my chest…that hopefully isn’t a stab wound.

Okay, so that wasn’t really a song if we’re being technical but the mini-album’s second track definitely is. “Don’t shoot Rutakame!” is a bit ambiguous as to whether it means don’t shoot one Rutakame Run or if it’s frantically asking her not to shoot us, but I like that. I also like the very grand orchestral section that leads us into the macabre show tune that comprises the song’s main instrumental. It kinda keeps you guessing what direction things are heading in for a bit which was cool. The folk slant that things took is also something a bit different from Melon Batake, who some have accused their songs of sounding a bit too similar in the past…not I though. Vocally the groups seem to be in fine form here, having pretty much seamlessly transitioned over to the new line-up with everyone sounding like they’re firing on all cylinders and complimenting each other very well. The quite high pitched and harmonic vocal style probably isn’t going to appeal to everyone but it fits with the overall style of the instrumental and it’s the obvious direction that they should have taken here. You get a bit of personality sprinkled in along the way too by way of the odd quip or short monologue, so there’s still plenty of what we all know and love about Melon Batake going on too. Didn’t except to hear this sort of style from the group, but it’s by no means out of place in the context of their wider discography.

We continue the Rutakame Run theme into the release’s third song “Itsuka no ōkami” which sees her get what I believe is her first solo song. That’s pretty cool and long overdue considering both Nakamura and Yuffie have quite a few solo efforts to their names at this point, granted largely outside of the group itself. A haunting piano arrangement works as the backbone of the track, creating a very ethereal sort of atmosphere pretty much right from the word go. This compliments Run’s vocals which have quite a lot of processing on them to give this high pitched echo effect and it all comes together rather nicely. I mean this in the best way possible but I really didn’t expect this from Run. The vocal performance hits on so many emotions as we’re swept along by the instrumental in this sad but beautiful way and I was captivated from start to finish, which is kinda hard to do with me these days. This is definitely a pretty big change of pace compared to much of Melon Batake’s output, with the energy here being more raw and emotional than the normal high tension, Rockabilly sound that made the group as well known and loved as they are today. That said, this is a pretty special song and I think in time it’s going to be regarded as a highlight of the group’s already diverse and colorful discography. That’s what I think at least, you should all probably go listen to this one just to make sure I’m right though.

“Muteki no IDOL” is not only a pretty cool song title, but it’s also a very fitting statement given the events that have unfolded so far this year, as well as the situation that the majority of us still find ourselves in currently. “Invincible” might sound like strong language but despite everything, Idol has overcome and continues to thrive. The song itself presents the listener with a very upbeat, Jazzy composition as its main instrumental with a bit of an edge given to it by way of a subtle Rock influence. The retro vibe that runs through many of the group’s songs is present here once again, though with a slightly more modern spin on the track’s tempo and tone. Vocally it’s the sort of performance you’d expect for this type of song, but with plenty of that Melon personality coming through at the same time. More quick one-liners and just a hint of an eerie atmosphere creeping in at times to keep the theme going. The chorus is a much brighter, more straightforward Pop affair but with some pretty interesting instrumental choices and by that I’m mainly talking about the recorders which provide a very distinct melody all of their own. I liked how the energy built up over the course of the track too before getting into full swing and providing a lively ending to what is a pretty fun and energetic song in Melon Batake’s own unique way.

Five tracks in and we come to the main song that is being used to promote this release. “Kaizoku QUEEEN AMAZONES” was probably many peoples’ first taste of this new Melon Batake system and of everything to feature on this mini-album so far I would say it’s probably the closest thing to what many would consider to be the group’s “core sound” that we’ve heard. Guitars and piano are out in full force early on the track, weaving together another old-timey Rockabilly instrumental for the members to eventually present their vocal performance over. It takes a little while to get there too as the band gets into full swing and a grainy monologue sets the stage. From there things really pick up with melodic vocals offering a playful dynamic to the song which wasn’t there previously, but in that sort of uneasy way that is definitely a hallmark of the group’s sound so it’s nice to hear it here again in my personal opinion. The chorus is a little bit brighter than the rest of the track, with the vocals getting a nice boost and some horns making their presence felt in the instrumental to help the tone change along quite nicely. There’s some pretty nice hooks up and down the song and several little spoken word moments to add even more depth and personality to what is already quite a colorful track. More melodic at times than Melon have tended to be previously but they’ve got some new skills in the vocal department now and it’s cool that they’re getting a chance to show what they can do too.

Closing out the release is the rather ambiguously titled “STILL DEAD OR ALIVE” so I guess we’re being encouraged to delete as appropriate on this one. If the previous track was a bit too melodic for your tastes in Melon Batake songs then this one seems to be going in a much grittier direction as it opens with more Rockabilly guitars, but this time with a good bit more distortion making its way into the mix. The vocals are also in that signature lower tone too, which for me personally is my preferred style but I can certainly appreciate the more melodic stuff too of course. I just think that this style lends itself a bit better to the Horrorbilly side of the group’s sound and that’s definitely the tone that this song is attempting to strike and doing so incredibly well if my opinion counts for anything here. At under three minutes it’s one of the shorter tracks on the release and it doesn’t have quite as much variety contained within as some of the others. That said, if you’re looking for that dense, rhythmic Rock and Roll style with a little bit of a Horror element going on too then you’re getting that for pretty much the entire duration here. I can see people knocking this for not being different enough but for me personally, I think this might be my favorite track on the mini-album.

“to IDOLS to US to YOU” does a pretty great job of introducing this new look Melon Batake a go go to the world. There’s plenty of the things that we all know and love going on, but also some new stuff too as the group continues to develop and grow over time. The Run solo song was a very pleasant surprise and “Muteki no IDOL” in particular I thought presented some interesting possibilities for future songs from the group.

Melon Batake have had their fair share of setbacks this year, in addition to the ones we’ve all been facing, but the group’s DIY ethic has served them well in navigating everything. It does feel like they (and everyone else really to be fair) had lost a little bit of steam for a bit there but they sound like they’re back firing on all cylinders now with a new line-up that’s ready to take on whatever the world throws at it. I for one can’t wait to see what’s in store next for this very unique and much loved group.

Enjoy the content? Consider supporting the site on Ko-Fi for as little as £1.
Gollipop RecordMelon Batake a go goMini-Album Review
0 comment
FacebookTwitterTumblrRedditEmail