[Review] 8bitBRAIN – Under the weather 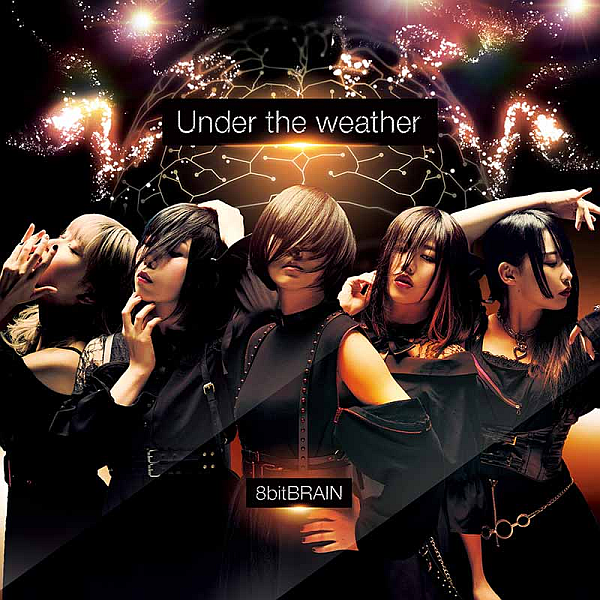 My thoughts on “Under the weather”, the major debut single from 8bitBRAIN.

If you’ve been reading the site for a while now then it’s no secret that I’ve been around the block a few times when it comes to this whole Idol thing. I’ve seen a lot of groups come and a lot of groups go over the years and there’s even quite a few that I keep tabs on that I just haven’t been able to feature on the site yet for various reasons. The most common one perhaps unsurprisingly being that they just don’t have music that is readily available to me or to you guys.

8bitBRAIN are one such group that falls…well, fell now I guess into that category. They’ve been around for almost 2 years and I’ve been following them off and on during that time. The group currently consists of 5 members and they describe themselves as a “dark horse that mixes Screamo with 8-bit style sounds”, which explains that part of the group’s name rather nicely. Their goal is to “shake up the crowded Rock Idol scene with their own unique style” and I guess this is the next step in that plan.

“Under the weather” is the group’s first major single and it comes in 3 different flavors, each with its own unique b-side for a total of 5 tracks. More like an EP of sorts I suppose, especially if you snag a digital copy if it’s available on your service of choice. I have a pretty fair idea of what to expect here but I think this release might surprise a few people and hopefully 8bitBRAIN can pick up a few more fans off of the back of it too. If you like Screamo, synths and all that good stuff then read on because I think you’re going to enjoy this one.

The single’s title track “Under the weather” is likely to be the first introduction to 8bitBRAIN for many out there, so the fact that it features the aforementioned blend of Screamo and 8-bit musical styles shouldn’t come as too much of a surprise to anyone. They ease us into things with a very bright synthesizer instrumental that serves as an accompaniment to some melodic but heavily vocoded vocals, which creates this somewhat ethereal feel to things early on. Then all of a sudden some rather impressive harsh vocals break through and ruin the mood in the best possible way. They’re a bit on the higher end of the pitch spectrum but I think you’ll like what you hear here if you’re into this sort of stuff generally. If it’s cleaner singing you’re after then the track features a decent amount of that as well, though there is an ever present tinge of vocoder but it shouldn’t be super noticeable. The chorus is basically an amplified rendition of the style we started out on, with some fairly catchy lyrics to help things along. The harsher vocals also get their chance to shine at great length in the bridge which is basically an extended cut breakdown of sorts and boy does it go hard folks. I really like the tempo of the instrumental and the rhythm with which the vocals are carefully screamed into our ears. Lots to like on this track and it should definitely turn a few heads if they get the chance to hear it.

Serving as the single’s primary b-side and appearing on all versions of the release is the very deliberately punctuated “KI-RI-SA-KI PRAYER”. Things start off fairly mellow with a nice melodic synthesizer being put to use as the backdrop for some very soft, almost whispered vocals to do their thing. From there the intensity gradually gets built up until we hit this sort of mid-tempo style that’s being pushed along by all manner of synthesizer bleeps and a harsh vocal that’s almost taking part in a call and response sort of relationship with the main, melodic vocals that are definitely the main focus of the verses. It’s pretty entertaining stuff, though if I could offer one criticism it would be that the instrumental is a little bit garbled sounding at times due to its somewhat distorted nature. Not a huge issue but you’re here for my thoughts on stuff like this I assume. 8bitBRAIN don’t really try to change too much up on the chorus for this track, keeping with what we’ve been hearing so far and just cranking up the tempo several notches, which makes for a pretty intense pace to how everything is delivered and definitely gives the song a bit of a boost as far as energy is concerned. That’s pretty much the story of the track outside of a brief whisper/scream interlude around the halfway point honestly, not quite as flashy as the single’s a-side but plenty entertaining enough to get by on. If you’re not super huge into the screaming but enjoy everything else associated with this genre then I think this could be a good option for you.

The first of our version specific b-sides is “Stand up story”, which features on the “Type A” variant of the single. It feels like I’m back in my “Traditional Idol” days here folks, I won’t lie. Things start off on a pretty heavy Electronica vibe, with an instrumental that wouldn’t appear at all out of place in any number of clubs the world over. The vocals give a similar impression, very heavily vocoded but providing a nice melodic dynamic to contrast the deeper bass going on behind them. Quite intense stuff but still easy enough to listen to and with what I would imagine is a fairly wide appeal. The transition into the main verses brings with it more of a Rap element, along with some more natural sounding vocals that fire off volley after volley of lyrics that are met with the sort of resistance that only harsh vocals can provide. A bit of a change in tone I must admit but very much in keeping with the modus operandi of 8bitBRAIN. I guess the opening style was the chorus because that’s what I’m getting here and it’s pretty nice stuff like I mentioned previously. As the song moves along both elements get kinda blended together a bit which I thought was a nice natural progression to things. It worked out that we ended up with a pretty intense, high tempo track with some nice melodies and contrasting harsh vocals and that’s what I came here for so I’m pretty happy with that personally.

“NemieNemie” gets the honors of serving as the b-side that is exclusive to the “Type B” version of the single and it starts out with a very strong throwback vibe. The instrumental is definitely calling back to that sort of 70s to 80s era of Dance and Electronica with that underwater feel to the tone of the synthesizers, along with the general rhythm of how things are flowing. The vocals match up well here too, with a good amount of modulation happening while still keeping things bright, melodic and perhaps most importantly understandable. Things kick up a bit with the introduction of some drums which both help to fill out the track and also give the song a bit more urgency and intensity than it maybe had at the beginning. It gets quite chaotic at times, and that’s before the prerequisite harsh vocals are introduced and give the song a very different feel than the nice retro Pop stuff we’d been enjoying. It’s a nice clearing of the air though in my opinion, even if it feels like more of a beatdown than the average person randomly listening to this track might want or expect. I’m a bit torn on the chorus here personally though as there’s some pretty catchy lyrical hooks and instrumental melodies but it kinda feels like it could stand out more, and it certainly doesn’t do so as much as the harsh vocal parts that’s for sure. Still, a very interesting and entertaining mix of retro Pop and Screamo and that’s what 8bitBRAIN themselves say that they are selling folks. Quite the quality product too I might add.

Rounding things out for this particular release is “Cure the sore”. A somewhat grim but also mildly humorous title for our last b-side that can be heard on the “Type C” edition of this single. It’s also the shortest track of the bunch at a little over 3 minutes, but much like its peers it’s bringing a lot to the table. We get a nice Digital Hardcore style instrumental to kick things off, setting a fairly high tempo as it does so which isn’t ever really a bad thing as far as I’m concerned. I was a little disappointed then at how much the instrumental got pushed to the back when the first verse hits. I dunno, it’s definitely still there but I don’t think they had to mute it as much as they did. We are afforded a rather nice vocal performance for our troubles however which features more lightly vocoded melodies trading off with some rather venomous harsh vocals. We’ve heard a lot of this sort of interplay on the single and so we should if 8bitBRAIN are able to pull it off as well as they continue to do so here. The chorus features some nice, upbeat and mostly unimpeded melodies which are wrapped around some quite catchy lyrics and if that’s not really what you’re here for then we’re also treated to another crushing mid-song breakdown where the harsh vocals are really let off the leash and allowed to bite and snarl to their hearts’ content. After that there’s just enough time for another run through of the more melodic bits and then this whirlwind of a track is rather abruptly concluded. Good stuff.

So yeah, if you’re into PassCode or other groups who like to dabble in Digital Hardcore and related genres then I believe you’d have a really fun time with this release. The title track is a statement maker and there’s plenty of interesting stuff going on in the single’s rather extensive selection of b-sides. Perhaps not the widest variety of genres on offer here but what the group does they do incredibly well.

Ultimately I feel like both 8bitBRAIN and this single are going to continue to fly under a lot of potential fans’ radars. It’s not really a bad thing I suppose as they clearly appear to be focused on their domestic market, as all groups should be, but it would have been nice if they’d made this release a bit more widely available digitally than they have. Oh well, it’s out there if you put in a little bit of effort and know where to look. As are most interesting things online.

Enjoy the content? Consider supporting the site on Ko-Fi for as little as £1.
8bitBRAINsingle reviewTeichiku Entertainment
0 comment
FacebookTwitterTumblrRedditEmail