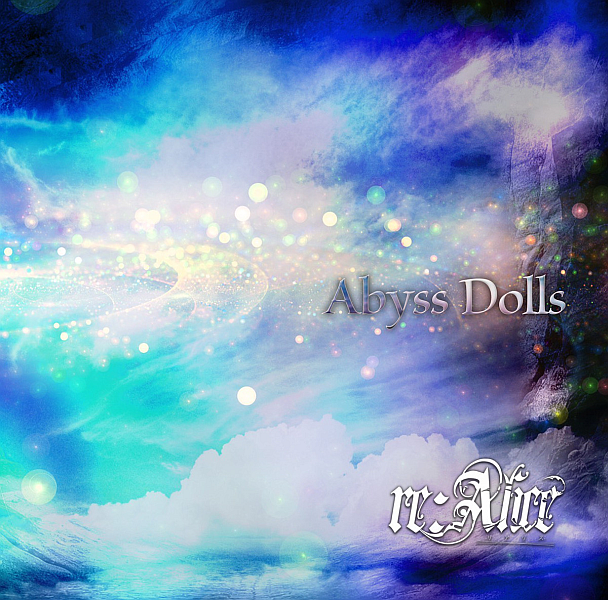 My thoughts on “Abyss dolls”, the first mini-album from re:Alice.

Its been an interesting start to the year, for a whole variety of reasons. The world finds itself in the grips of a pandemic, the likes of which hasn’t been seen in most peoples’ lifetimes and to top it all off the Idol scene has been really lacking in new music from some of its biggest hitters. I can’t put a positive spin on the former, but at least in the case of the latter it has opened up quite a bit of room for the smaller, less established groups to shine. As we’ve been seeing a lot on the site lately.

We’re taking a look at another up and coming group today in the form of re:Alice. That name might sound familiar to some of you as it was also the name of a group that Sakimura Yuffie of Melon Batake a go go/GARUDA fame was a member of for some time. Obviously this is a very different group to that one, both in terms of visuals as well as membership. I’m not even sure if this is like a spiritual successor or not as this project seems to be being run by a completely different management company. Man this Idol stuff sure gets confusing sometimes folks.

Anyway, according to their Twitter bio re:Alice are a “Symphonic Power Metal & Loud unit” which is a pretty interesting combination of styles on paper. “Abyss dolls” is their first mini-album and I believe their first release overall as they only just debuted at the end of last year. I believe I saw them very early on, on a show while I was in Japan but that’s hardly going to be a fair assessment so let’s start with a clean slate. I suppose I have a rough idea of what to expect based on their self-description of their sound but as always the best way to form an opinion is to just hit play and see what comes through the speakers. So let’s do that right now.

“Crying beauty” kicks things off with an opening instrumental centered around some mildly fuzzed out piano. Not too much, just enough to give the impression of a well loved recording or something along those lines. Drums and a few other elements are slowly brought in and it’s easy to see where the Symphonic part of the group’s musical equation is coming from. We don’t have to wait for the Power Metal part to make its appearance either. Melodic lead guitar riffs take center stage at this point, backed by deeper drums that beat out a rhythm that is pleasing to the ears. A shift to a more downtempo, groovy style affords the vocals in the song’s opening verses more room to breathe and their low, smokey notes maybe aren’t what most would expect here but they’re for the most part well executed and fit the mood the instrumental is giving off. The chorus is a much more lively and rangy affair by comparison, with some quite frankly ridiculously good operatic vocals that had me questioning just what exactly I was listening to for a moment. The instrumental provides an upbeat rhythm and some anchoring deeper notes for all of this to play out against and helps tie everything together quite nicely. This and the lead guitar are very much the highlights of this track. If you’re into Symphonic Power Metal then this song probably won’t live up to the greats, but from an Idol group that are just starting out this is pretty incredible stuff.

The mini-album’s second track “Violet” opts to do away with the more melodic component as it starts out, with crunchy guitar riffs and intense drumming being the direction in which things set off in. I really like the energy created here too, but for completely different reasons to the previous track. A more melodic element is eventually incorporated into the composition by way of a cleaner lead guitar tone but the drums keep thundering in the ears and do their best to suppress it as much as possible. We’re treated to more of that low, Gothic style vocal that we heard previously as the initial verses come in so I suppose this is going to be somewhat of a recurring theme here. No problems with that though because it’s all done very well and I love the atmosphere that this style brings to the table. The chorus takes on a similar style to “Crying beauty” but not seeking to explore such high of a pitch this time. I think I prefer this slightly more restrained style as it lets more tone come through but maybe that’s just me. The chanting in the transition back to the verses was also a nice touch I thought and definitely added to the overall themes being crafted by the track. The way all of the styles came together towards the end of the song was also really well done and it felt like things ended on a pretty high note despite the gloomy nature of much of the track.

At the midway point of the release we are greeted by “Winter’s abyss”…wait, that definitely came out wrong. Much like its title the instrumental starts out very serene sounding, sort of like how it gets quiet during snowfall or some much more elaborate metaphor that my brain doesn’t have the power to put onto paper. The very ethereal sounding opening vocal salvo further adds to this idea, sweeping the song along on their melodies and doing a great job of being both haunting as well as somehow enchanting at the same time. I’m not overly in love with some of the guitar tones that are coming through when the song decides to shift through the gears a little though I have to say. It’s not horrible but it just feels a little bit too jagged and it harshes my buzz man, what can I tell ya. The song’s chorus is another very solid effort in the style of the genres that it’s drawing inspiration from, but it’s not quite as memorable or awe inspiring as the two other examples we’ve heard on the release thus far. Nothing wrong with it in the slightest; great hooks, vocal performances and all the rest but a bit more understated I suppose. Also of note are the really awesome sounding guitar solos about two thirds of the way through and again right near the end of the track. It probably didn’t need them but they provide a couple of cool moments that aren’t vocal related so why the heck not. A bit more of a Ballad this one but you won’t find many that sound this interesting I promise you.

Who doesn’t love a good reference to Stanley Kubrick’s cult classic “The Shining”? re:Alice sure do apparently, with the word “Redrum” proudly featuring as the title of this mini-album’s fourth track. Ambient synthesizer melodies contrasted with a pounding, distorted drumbeat give the song a fairly eerie atmosphere as it slowly comes to life. Even more heavily distorted guitars are added into the mix along the way and the song takes on a very chaotic dynamic, and all of this before even a single vocal has been delivered. It’s a bit of a slow burn but when the vocals do come in they add a much needed melodic element to the track that the synthesizers alone just weren’t going to be able to provide. The verses are definitely playing to that eerie, Gothic sort of vibe with a bunch of low melodies and just a hint of insincere playfulness to really put you on your guard. The chorus is a much more bright and upbeat beast however, straying dangerously close to a Pop style on more than one occasion. It was a bit odd to hear but the hooks are good and I liked the change in tempo that it brought to the song. Lots to like on this one generally, from the mood to the awesome guitar work once again but one ding I would give it is that the drums and distortion can be a bit too intrusive at times for me. It’s not a big deal but it did cover up a few cool moments I wouldn’t have minded hearing a bit more clearly. Outside of that and the slightly out of place chorus, more great stuff from re:Alice here.

We all too quickly reach the final track on the release, which takes the form of the somewhat blandly titled “Dancing behind”. Nothing bland about the instrumental the song opens up with however, overwhelming the ears with heavy bass and intense drumbeats that are broken up by some airy, symphonic synthesizers that almost sound like the wailing of ghosts or something akin to that. I like it quite a bit, and I also rather liked how they built the intensity up and up as the song approached its first verse. The vocals are very much in contrast with the intense instrumentation that’s unfolding around them however, taking on this very deliberate and bass heavy tone that isn’t too dissimilar to the Enka style if I had to describe it using a term some people might be familiar with. It works well with the style of song they’re going for, especially when things take on a more…chanty dynamic and the bass gets heavier still in the build up to the song’s chorus. It’s again a shift to the more melodic, with a piano melody being worked in and the tone of the vocals becoming a lot lighter than it had been up until that point. The increased tempo of the instrumental also helps to clear the air a little as things were getting a bit stuffy to be fair. A pretty cool way to close things out on a release that features a wide range of takes on both the Symphonic and Power Metal styles. re:Alice have also managed to slip this Ballad in under my nose and I really enjoyed it so extra credit for that for sure.

Like I mentioned at the start of the article, I had a rough idea of what to expect coming into this release but in the end it was way better than I could have ever really expected. I wasn’t prepared for the quality of both the instrumentals as well as the vocals, especially from a group that only debuted about 6 months ago. If you’re into Metal music in any capacity then don’t sleep on this mini-album. It’s going to be one of the better releases in this particular genre of Idol this year.

So yeah, definitely going to be paying a lot more attention to re:Alice going forward I think. Symphonic Power Metal isn’t something I can just throw on casually I’ll admit, but I can still appreciate quality music when I hear it. If this is what they’ve come up with for their debut then I’m excited to hear what’s going to come next. I just hope the group can hold it together for a while so it can realize its true potential. The Idol world is cruel mistress though, but I’m going to sit here and cross my fingers, toes, eyes and all the rest and hope for the best.

Enjoy the content? Consider supporting the site on Patreon for as little as $1 a month.
ALIVE INTERNATIONALMini-Album ReviewRe:Alice
0 comment
FacebookTwitterTumblrRedditEmail

Episode 01: The Virus From Outer Space