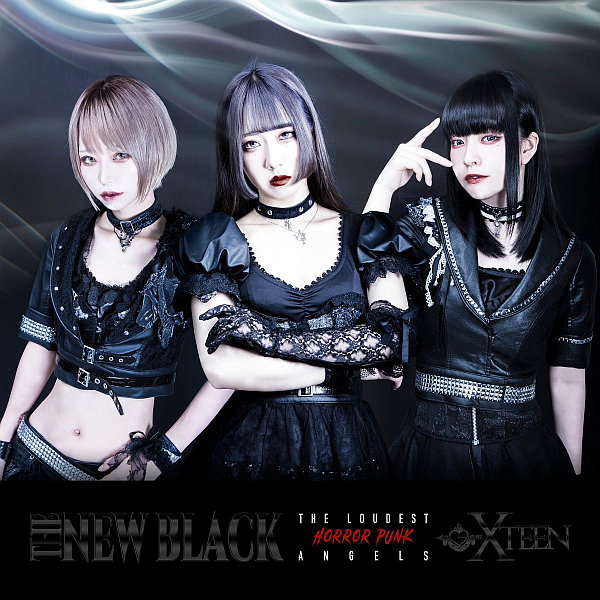 My thoughts on “THE NEW BLACK”, the latest single from XTEEN.

There’s quite a few things that only come around once per year. You know, birthdays, Easter, Thanksgiving, Christmas, trips to Japan…things like that. In the Idol world some groups only release a new CD once per year, if they even release one at all. A rather difficult time for those of us not fortunate to live in Japan and be able to go see our favorite groups perform week in and week out. Well, today Christmas came early(ish) for me and I’m feeling pretty happy about it.

XTEEN are a group who have been around for a while now but are still in that process of gaining popularity and fleshing out their discography. They’ve had their share of line-up difficulties as well, most recently with the departure of Yulianne who was replaced by new member Elle (formerly of MISTRESS) shortly thereafter. The self-proclaimed “LOUDEST HORROR PUNK ANGELS” have proven to be resilient up until now though and have all of the components (a great look, rocking tunes, etc) to really catch on, both domestically as well as abroad should they wish to.

“THE NEW BLACK” is the group’s third single in two year, coming almost exactly a year after their previous outing with “ROMANTICIST” (review here). It features 3 brand new songs, and like last time SAKI of Mary’s Blood fame is providing the guitars on all of the tracks. Perhaps that might catch a few of your attentions if the thought of an Idol group doing hard hitting, thrashy, heavily Punk influenced songs wasn’t already enticing enough for you. It definitely is for me and I’m eager to get some thoughts on this single down on paper so let’s get this show on the road already.

The single’s title track “THE NEW BLACK” has a pretty clear and simple message; forget orange, pink or any other color that you might be thinking of. XTEEN are in fact “the new black” and well, I’m not going to sit here and disagree with them about that. After being lulled into a false sense of security by the song’s rather classy sounding opening instrumental the guitars hum into life, accompanied by the rawer sounding, but still well produced drumming that we’ve come to expect from XTEEN songs at this point. Not the wildest opener you’re ever likely to hear from the group but this song is a bit of a slow burner, gradually building up and letting you hear the vocal talents of the members nice and clearly without too much thrashiness distracting from what are 3 pretty talented singers. Things pick up a bit from the first chorus onward however, with the song taking on a grittier dimension that’s achieved pretty effectively by way of some distortion and shouted vocal delivery. SAKI also has some pretty cool guitar parts throughout the song which add to that coolness factor and also provide a nice change of pace from the at times almost relentless tempo of the verses and choruses. Like I said though and if you can believe it, it’s still a bit more of subdued track than what XTEEN are usually bringing to the table but it still packs plenty of punch and should appeal to most people who like their music heavy.

“LOST GIRLS” is the single’s first b-side and yes it is indeed a gender bent reference to Peter Pan’s crew of…well, lost boys I suppose. They didn’t go for the low hanging fruit of the 1987 cult favorite horror movie “The Lost Boys” it would seem. This song has a fairly traditional Punk sound to it, coming through pretty clearly from the instrumental and the constant chugging nature of the guitars featured within it. It gives the song that pleasing tempo that a lot of you are probably going to be familiar with if you’ve been into Punk music for any real length of time. There’s obviously more than that going on though because SAKI is once again involved of course, so there’s a pretty sweet sounding guitar solo about two thirds of the way in that once again provided a little something extra to what was already a pretty great Punk track. Though maybe the trash can lids they’re using for cymbals on the drumkit might not be to everyone’s taste I did feel like they gave the song a bit of added personality and it’s just the XTEEN style at this point honestly. The vocals are perhaps a bit more melodic than you might expect, especially when the song’s title rings out in a pretty catchy harmony during the choruses. Really like that by the way and they do mix it up with a much more genre appropriate style too, which creates a rather nice contrast with its lower tone and slightly rougher delivery. I’m quite a big fan of this one, it’s just a shame they don’t play it live that often.

The single’s second and final b-side “THANK GOD IT’S FRIDAY 13TH” once again features a rather amusing mash-up of several references to create the song’s title. Of course you have the popular “TGIF” phrase that we’ve all muttered at least a few times in our lives and also cult slasher movie “Friday the 13th”. Despite this, the song starts off with a pretty grandiose sounding instrumental with SAKI showing off her skills on the guitar once again. A nice, anthemic “Woah, woah, woah” section later and the song fully gets underway. The vocals start out pretty bright on the whole, but get a bit rougher around the edges as the song progresses along. Lots of great hooks too which gives the song a much stronger Pop quality than you’d usually expect to hear from this group. The instrumental is comparatively more subdued than the firey Punk spirit that inhabits most XTEEN compositions but there’s still a few moments where they let SAKI do her thing and we’re treated to a cool guitar solo or two. Not quite a Ballad but certainly getting there, especially by XTEEN standards but this song is just such a crowd pleaser that it doesn’t even matter. This track has all of the components to be a massive hit in a live setting and I hope that one day XTEEN find themselves in a situation that allows not only them but their incredibly passionate fans the opportunity to do it the justice that it absolutely deserves.

“THE NEW BLACK” slots itself rather comfortably into XTEEN’s existing discography. The songs have a sense of familiarity to them while also bringing a few new elements to the table. Perhaps not everyone’s cup of tea depending on how you like your instruments processed or vocals delivered but if you can get behind the idea of an Idol group blending old school Punk sensibilities with a little bit of J-Pop sweetness then XTEEN are the group for you.

Despite the setback of having to replace a member a few months ago, XTEEN appear to be going from strength to strength. Elle has slotted into the line-up with ease and the group is slowly but surely growing in popularity. I feel like it’s going to take just one lucky break and then the sky is the limit for the trio. In any case, XTEEN head into 2020 with some nice momentum behind them and I’m very interested to see where the coming year takes them.