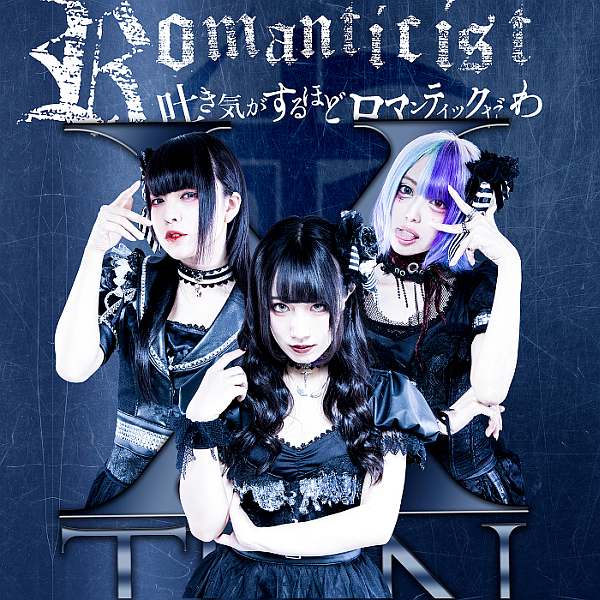 My thoughts on “ROMANTICIST”, the second single from XTEEN.

This week on the site I’m going to be writing about something a little different than the dozen or so groups I usually review. To be fair I think I’ve been getting a bit better lately when it comes to variety so hopefully some of you out there have noticed at least. I’m actually rather looking forward to this review, although I may come across a little bias as I’ve seen the group in question live a few times on my recent Tokyo trip and they were awesome as both performers and people. You guys don’t take my opinions that seriously anyway so it shouldn’t be too much of a problem, right?

The group in question is XTEEN (pronounced Christine), a 3-piece from Tokyo consisting of Himekusa Hinako, Kujo Shion and Yulianne. They’ve been active for just under a year now and their Twitter bills them as a “Horror Punk Idol unit”. Shion might be familiar to some of you who have a taste for more obscure groups as she’s been in quite a few before landing here and Yulianne while having had a rather drastic image change may be familiar to anyone who followed Ultimate Future Weapons mofu or very early Gokigen Teikoku. Her mother is also a former member of Onyanko Club which caused a bit of a stir when it came to light recently. You could say that this group has a bit of an Idol pedigree to it.

“ROMANTICIST” is the second single to be released by the group and the first to feature the current line-up with Himekusa being the only remaining member from the group’s debut release “Eclipse”. SAKI of Mary’s Blood fame tracked the guitars for both XTEEN’s debut single and this release so maybe that will encourage some of you to check them both out. Truth be told I’ve actually heard all of the songs on this CD performed live so I have a pretty good idea of what to expect here. That said, these are studio recordings so it’ll be interesting to hear how they differ, if they differ that much at all. Let’s check this CD out.

The single’s title track “ROMANTICIST” gets things going by turning up the distortion dial to put some meat on what would still have been a very fun Punk Rock riff. Everything as advertised so far folks. The drums are also pushed quite far forward in the mix which might take some getting used to but it definitely serves to up the intensity of the song so no complaints here. It’s not all just an aggressive assault on the ears though, there is actually quite a bit of more technical guitar playing worked into the composition as well. This is mainly heard in the verses where we’re treated to some rather catchy riffs and also the brilliant guitar solo that SAKI produces about two thirds of the way into the song. I’m by no means a genre expert but it sounded pretty Horror Punk to me. Vocally is where opinions on this release are likely to be very divided. Look, they’re not super clean and perfectly post produced but for this kind of music should be in the first place? They’re a little rough around the edges and maybe they like a “Woah-oh-oh-oh” a little too much but there’s a swagger and a passion to the delivery that we might otherwise have missed out on. Everyone puts their stamp on the track and in my bias opinion Hinako perhaps moreso than others. In any case I think this is a great song if you’re able to get past whatever hangups you might have with the production.

Following on from that we have “Alice The Ripper”, which might be one of my favorite song titles of 2018. You can’t listen to a song title though…well unless it’s a lyric I suppose, but you get what I mean. Things start off pretty ominously, with some rather creepy piano accompanied by the slow ticking of a clock. It creates a really great atmosphere that gets totally bulldozed by the thrashing instrumental that it leads into. If the last song wasn’t Punk enough for you then maybe this one will live up to your expectations a bit more. I say a bit because the song does settle into a style that I’d say is a lot closer to Metal at times, mostly when there’s a lull in the action or when the verses are being delivered in a style that I certainly did not expect from a group like this. More on that in a bit though. I don’t know, I’m a pretty simple guy, I like music you can jump around and bang your head to and that’s exactly what this song’s instrumental gives me so again I don’t have much to complain about. The vocals are where things get a bit more interesting though. Feel free to correct me in the comments but there’s a few verses in there that are getting awfully close to being rapped. I’m not talking in a Nu-Metal kind of way, just that the structure and flow was not what you’d expect from a song like this. The chorus and the parts around it are more conventional I guess you’d say, opting for that deep, somewhat dramatized delivery to keep a bit of a theme going. There’s a few more “Woah-oh-oh-oh” moments too that you’re going to learn to like or be put off by. I prefer “ROMANTICIST” personally but this song is pretty darn good too.

Which brings us on to “Living Dead Doll”, the last track on the single. Wasn’t there another idol group with a similar name a year or two back? It sounds familiar to me somehow anyway. Compared to the other two songs that we’ve heard so far this one has a pretty slow build-up before it starts to get going. The rest of the song is also pretty different to the other two on this single, it’s not quite as loud and in your face but still keeps to the overall theme. I guess maybe this could be considered a softer song by XTEEN standards, the instrumental definitely has a lot less weight to it and a lot of that is due to the drumming being pretty muted. I’m a little iffy on that decision honestly because I feel like the song would be better if they bumped up the drums a bit more but it’s hard to know without actually hearing it. I did rather enjoy the guitars on the track once again though so the instrumental definitely has that going for it. On the vocal side of things there are indeed several more “Woah-oh-oh-oh” moments but they also mix it up a little bit by incorporating some light gang vocals which worked out pretty well. The chorus on this one does feel a little weak, especially if you compare it to the verses, which isn’t helped by how much the instrumental is pushed down in the mix. It’s still pretty catchy though and I do enjoy the song as a whole. I would have to say it’s my third favorite from this single though.

I personally really like this single and I also really like XTEEN as a group. The rough around the edges nature of the songs and more specifically the vocals are likely to divide opinion as I said but it’s pretty representative of what you’re going to get in a live setting. Since when was Punk music supposed to be all polished and squeaky clean anyway? I think it adds a bit of personality and charm to some already really enjoyable songs.

Hopefully this review gets a few of you to check out XTEEN and see what they’re all about. Even if it’s only because SAKI did the guitars for this release. I think the group has a good concept and some great songs so hopefully they’re able to stabilize the line-up and really build from here. Definitely a group that you should be keeping an eye on as we head into 2019. I think they’re going to be doing some pretty interesting stuff but that’s just a hunch on my part for now.