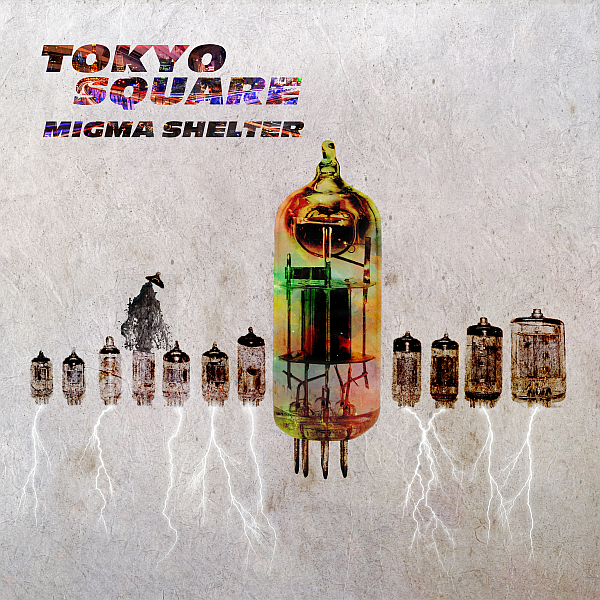 My thoughts on “TOKYO SQUARE” the latest single from MIGMA SHELTER.

Sometimes, in my more egotistical moments I do wonder what fans of groups think when they see I’ve written about their favorite group’s new release. I suppose they’re pretty happy if it’s glowingly positive and less so if I didn’t enjoy it as much as they did. That is of course assuming they even care at all. AQBI fans in particular probably dread when I write about their favorite groups because as we’ve seen in the past, I like what I like and have no problem telling you all about it when I don’t care for something.

So MIGMA SHELTER have had a bit of a bumpy 2019, though I suppose having a 2019 at all should be deemed as a pretty big success considering where the group found themselves at the start of the year. There’s been several line-up changes between then and now, with new member Nananara being the latest recruit to the group’s line-up. Hopefully things will settle down a bit eventually and the group can focus on what’s important, that being playing shows and of course putting out new music.

“TOKYO SQUARE” is the group’s newest single and their third release on the year (reviews for the other two here, and here), so despite the line-up shake-ups they’ve been pretty active on the new music front. The single features 3 tracks, including “Yoi no Uta” which they’ve been performing live for forever so it’s nice to see it finally get committed to disc. The single’s other two offerings appear to both be brand new however so if you’re a fan you definitely don’t want to pass this one up. As for what I think? Well, I guess we should start the review and find out shouldn’t we?

Title track “TOKYO SQUARE” kicks things off with a pretty bright and rather ambient instrumental with some pretty nice xylophone tones and just a dash of synthesizer sparkle. A bit too relaxed for a MIGMA SHELTER song but don’t worry, after the inclusion of a few Lo-Fi style vocals the drum machine kicks in and the tempo of the song is increased significantly. We’re also treated to some very bright and at times almost verging on ethereal sounding harmonies that if I’m honest do sorta detract from what’s going on in the instrumental as they’re just so much cleaner sounding. There is a pretty cool instrumental…interlude I suppose? at about the one minute mark which I think was probably needed to give the composition a bit of breathing room to show some personality. Then it’s back to a mix of the opening instrumental and the kinda suppressed follow up one until about the last minute or so of the song where they bring in a saxophone and the song takes on this bouncy carnival atmosphere. Pretty unexpected but I really liked how it sounded and much like the earlier interlude it helped the song out by giving it a bit more personality. Not a bad little number on the whole from MIGMA SHELTER here, pretty enjoyable even for someone like me.

Up next is “Yoi no Uta” which is probably a pretty familiar song if you’ve been a fan of MIGMA SHELTER for any real length of time I suppose. They’ve been performing it live since forever so it was long overdue getting a studio recording of its own. The instrumental starts out with some really deep, resonating synthesizer tones that create a very dense ambience for the water dripping and whistling effects, which are also provided by some synthesizers, to do their thing over. Eventually the song transitions into a very vaguely ethnic inspired sound, which is probably saying way too much on my part but it’s the only way I know how to describe it. The synths take on this groovy, digital twang and the flow of the vocals remains fairly consistent in their low, breathy delivery but does gain a little bit more intensity during this section. That intensity carries over into the final part of the song where we return to a similar sounding instrumental as what we started with but this time the vocals are much more emotionally charged in their tone and how they’re sung. It makes for a pretty nice climax to the track in my opinion. Lots of variety with the instrumental on this one, though the vocals were maybe a little bit repetitive. Being almost 8 minutes long isn’t something I’m a huge fan of either but I’ll forgive them a little here I think.

Rounding out the single is third track “Ake no uta” which gets off to a pretty ominous start with some pretty unsettling synthesizer beats that really set the tone quite effectively. It makes for a very tense atmosphere that has you waiting in anticipation for something to happen, cool stuff. When the vocals come in they don’t exactly do much to alleviate any of this, sitting somewhere between foreboding and ritualistic chanting in their delivery so I guess we’re really going all out with this theme. The tempo does pick up a bit as we move into the middle part of the song, with a quicker drumbeat being the main driving force behind that. The chanting also increases and it sounds like they even added some male voices, as if the song wasn’t eerie enough as it is. There’s then another interlude of sorts, with sporadic vocal lines coming in every so often as the beat begins to slowly build up until it gets into full swing and the song really comes alive for the last couple of minutes or so. It never really deviates from the script as far as the atmosphere is concerned but by the time we hit the climax the drums are more rapidly pounding, the synths have taken on a more symphonic element and the vocals and chanting have much more energy and emotion behind them though that’s not saying that much considering where we started from. This is a pretty cool song if you’re into stuff with a creepier vibe and it’s actually pretty catchy too which is also a plus.

In the end I actually enjoyed this single quite a bit, so maybe there is hope for me after all. Out of the 3 tracks on offer I would have to say that I enjoyed “Ake no uta” the most, but that’s mainly because I have a thing for songs with a bit of a creepy vibe to them. The title track was also pretty enjoyable and I’m now going to ruin everything by saying that “Yoi no uta” was probably my least favorite of the bunch. Drat, so close.

If you’re a fan of MIGMA SHELTER already, and I know a lot of people are, then you probably don’t need me to tell you to check this single out. If you aren’t though and you’re curious then you should give this one a try. There’s a lot of interesting stuff going on in the songs and you’re unlikely to hear it from too many other groups out there. Man, that practically sounds like high praise coming from someone like me, doesn’t it?