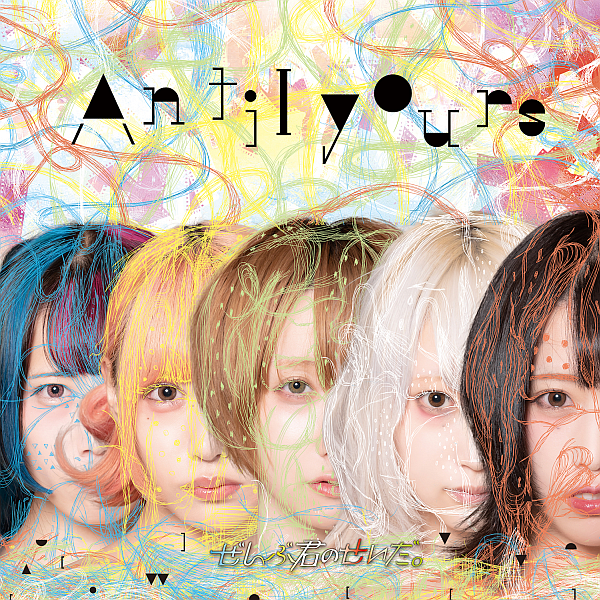 My thoughts on “Antilyours”, the latest single from Zenbu Kimi no Sei da.

In these increasingly uncertain times in the Idol scene, I think a lot of us are looking for just a tiny bit of consistency. I know I am anyway, and perhaps surprisingly (or unsurprisingly depending on how you look at it) Zenbu Kimi no Sei da have been a pretty decent source of just that for the past couple of years. Of course they’ve had a few line-up changes along the way, but the core of the group endures and the pace of newly released music barely ever falters.

Speaking of line-up changes, Zenkimi recently went through another one. As we all know, Togaren departed a while ago now and the group has finally gotten around to finding a replacement…two actually. Enter Akebono Nagi (yellow) and Oyatsu Yukinojou (blue) as the latest recruits to join the ranks of codomomental. This single that I’m going to be writing about today will also be the first time many people are likely to have heard what Zenkimi sounds like as a freshly minted 5-piece so that should prove rather interesting.

Which brings us on to “Antilyours”, Zenkimi’s 9th single as of writing this though they’ve only gone and announced another one already because why not I guess. These singles join a pair of albums featuring a vast selection of re-recorded material…which makes the fact that this single’s sole b-side is also a re-record a bit disappointing. More on that in a bit though. As for what I’m expecting from this single? Well it’s Zenkimi at the end of the day isn’t it, though I am interested to hear how the two new members fit into everything. I suppose we better take a listen and find out, shouldn’t we?

The single gets going in fairly typical Zenkimi fashion, title track “Antilyours” features a very slightly psychedelic synthesizer melody as its opening gambit before having some guitar join the fray and settling into the group’s currently favored style of Synth Rock. I quite liked how they managed to balance the song by having each of its two main genres trade-off with each other before coming together for the chorus. I’d personally say that the synthesizer work is the more interesting, not that the Rock instrumental provided by the band side of the equation is bad or anything. I just felt like the synth melodies were a bit more dynamic and more memorable for the most part. Of course on the flip side, the song would have been seriously lacking in punch and rhythm had the guitars and drums not played their part too. While I like the instrumental a good deal, vocally things are a bit hit and miss on this song for me personally. The verses are solid, and pretty catchy and I thought getting a bit darker and dramatic for the bridge was pretty interesting and definitely gave the song another side to it. The chorus on the other hand just kinda feels a bit played out I guess. I know it’s a Zenkimi song and to a certain extent you know to expect certain things, but I just feel like we’ve heard this structure and flow quite a lot over the years. It’s by no means bad of course and it’s perfectly catchy and enjoyable to listen to, I just feel like there’s plenty of better examples in the Zenkimi discography already.

Like I mentioned earlier, for this single’s b-side Zenkimi have opted for a re-recorded version of a previously released song. Fairly disappointing given the context of recent and upcoming releases but oh well. “Tadakimito” originally featured on the group’s “NEORDER NATION” album and you can read my initial thoughts here if you’d like. Definitely a more synthesizer heavy song than some of the group’s more recent output, but there’s still a noticeable Rock element involved too. The instrumental on the whole has a really good energy to it and the chorus especially has really great and catchy beat to it that should get stuck in your head fairly easily. It doesn’t seem like they’ve done too much to the instrumental, which makes sense and I don’t really think they needed to either so fair enough. Things are bit different on the vocal side of things naturally, as Togaren has been supplanted by the two new recruits. They appear to both do a rather nice job of things, I certainly didn’t hear anything out of place at least and it also sounds like they didn’t cheap out on the production for this particular re-record either so that’s always a plus. The chorus on this song was great originally and that remains the case on this updated version as well. If you’re a fan of the earlier Zenkimi work or only just hopped on the bandwagon in the past year or two I think this song provides a little something for everyone. Well worth a listen if you haven’t checked it out yet.

“Antilyours” leaves me with some slightly mixed feelings as I come to the end of this review. The a-side is rather enjoyable on the whole but the chorus is a bit underwhelming, though maybe it’s just the mood I was in while listening to it. The b-side is pretty good as far as re-records go but I’m fairly disappointed to see it included here considering we’re getting something like close to 40 rerecorded songs over the next couple of months in the form of two albums. I guess I’m just wondering why we couldn’t have had two new songs out of this single.

On the plus side though, the two new members sound like they fit right in so that’s pretty awesome. I always worry when a group dwindles down to 3 members as it means you’re one ill timed graduation away from being in real trouble. The future looks bright for Zenkimi at the moment though, as it does for most of the codomomental family in fact. Hopefully after all of this rerecording business is out of the way we might even get an album full of brand new songs from this iteration of Zenkimi, wouldn’t that be cool?