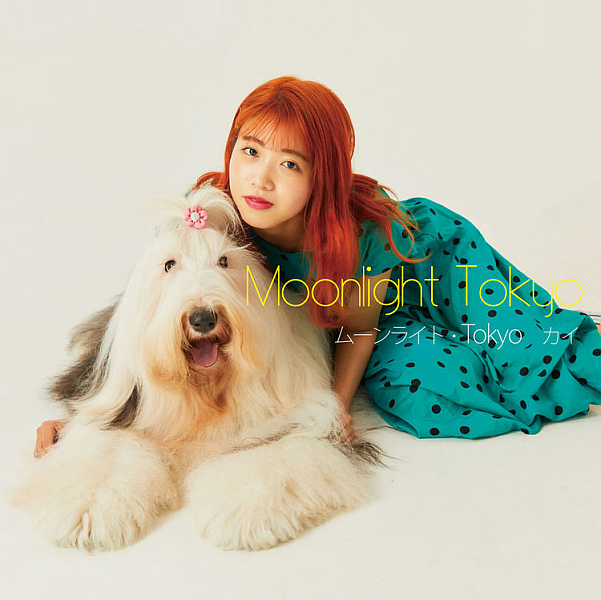 My thoughts on “Moonlight Tokyo”, the debut solo single from former THERE THERE THERES member Kai.

I’ll freely admit to anyone who asks that I’ve never been the biggest Bellring Girls’ Heart/THERE THERE THERES fan. Certainly not when compared to some of the people I know in the community, that’s for sure. Though I did review THERE THERE THERES’ “Snacky” single for the site last year and did intend to review their “BRICKS” album, but it fell through the end of year cracks unfortunately. Like I said, far from a huge fan but I can certainly appreciate what they were all about.

THERE THERE THERES disbanded in February as we all know, with the members all being scattered to the winds and finding their feet again in various new projects. I’ll be reviewing a release from one of those today actually, with Kai’s debut solo single “Moonlight Tokyo” being the subject of my attention. You all know I have a bit of an appreciation for solo idols by now and I’m always happy to welcome more of them into the scene, so I’m pretty interested in this release.

The songs on the single are composed by various artists, including Sato Yusuke from the band Camera=Mannenhitsu and Yoshida Tetsu who has done a lot of work with WHY@DOLL in the past. Also included is a cover of Manabe Chiemi’s “Fushigi・shōjo” for any of you out there who are into your Idol history. Techno Pop and Vaporwave are supposedly the main influences for the single and it’s supposed to have a fairly retro feel. I’m super okay with all of those things, so on paper this sounds like it should be right up my alley. Let’s get into the review and see if it’s also the case in practice.

It only took the opening few bars of lead track “Yūsei yoriai wo komete” to tell me that this was probably going to be my kind of song. The instrumental definitely has that retro Pop feel to it that’s been a fairly popular sound in Japan for the past few years. A fairly simple, repeating synthesizer melody serves as the backbone upon which some more intricate sounds and rhythms are built. Kind of mellow but still having a little bit of an edge and a pleasing, somewhat groovy energy. Quite loud in volume too compared to what you typically hear from similar songs in this genre, at least to me anyway. Kai’s vocals work well with the style of song being delivered, with plenty of modulations and other such effects to help things along. I’m not typically into processing vocals a bunch but for this sort of song it’s very much in keeping with the very well defined style. There were a few moments where things went a little bit too high pitched for my personal tastes but outside of that the lower notes were very smooth and definitely had the kind of richness that I tend to favor when it comes to this sort of music. If you’re into your City Pop, 80s revivalist stuff or just want something cool to listen to then this song has all of those things.

“Pink・Shadow” turns up the groove a few more notches, with a pretty creative opening instrumental that sees the song’s title get incorporated into the synthesizer. Not an original concept by any means but I still get a kick out of the little things like that. I also thought the drums gave everything a rather nice rhythm, hence my increased groove comment. Said drumbeat plays a pretty significant role in the song, being supplemented by lots of synthesized goodness. Hard to tell how much, if any of it, is real but the song does a great job of creating the impression of there being a horn section (which gets a great solo moment by the way), warm basslines and maybe a little bit of guitar but it’s hard for my untrained ears to really tell or not. On the vocal side of things Kai delivers what to me sounds like a much more natural performance on this song. Granted there is still a bit of tuning and such going on but it’s much more subtle here than on the previous track. I think it’s for the better, as Kai really has a nice rich quality to her singing voice. Something that definitely works well for this style of music so they’re really playing to her strengths as a vocalist. Great flow and lovely melodies do at times feel like they’re overshadowed by the flashy aspects of the instrumental but I’ll happily have more of both injected straight into my veins thank you very much.

As I mentioned earlier, third track “Fushigi・shōjo” is a cover of the lead track from Manabe Chiemi’s album of the same name. Released all the way back in 1982. I’ve had a bit of a listen to the original and I have to say that Kai’s rendition is fairly in keeping with it, which makes sense considering it’s in the same style as the previous two songs on this particular single. I have to admit that the opening synthesizer flurry caught me off guard a bit so I was rather appreciative that the song settled down a bit shortly afterwards and began building up to the first verse. From there we’re treated to a rather lively synthesizer melody that is quite literally ripped straight out of the 80s, go figure. The drumbeat is pretty straightforward, mainly there to keep things on track and provide a little bit of rhythm too. Kai’s vocals while also very much in keeping with the original do sound much fuller, likely due to advances in recording technology over the years and they also keep the somewhat uneasy air that the original song had that is very much going against the fairly carefree vibe of the instrumental. Never really sure how to evaluate cover songs but here goes; Kai did a great rendition of the song, updated with modern production which definitely made for a more enjoyable listen in my opinion. Though we wouldn’t even be talking about it if the original wasn’t also a great piece of music in the first place. Really good stuff on both fronts.

The opening instrumental of “Himitsu no tobira” takes a little bit to wrap the mind around, at least for this old man anyway. It has this vaguely tropical sort of vibe to it, provided by some pretty uncommon synthesizer sounds that are backed by a fairly substantial amount of bass. It gives things a very warm feeling, which might be playing into my tropical, summer vibe comment. The instrumental focuses quite heavily on more “traditional” instruments like guitar and drums, which makes for a nice change of pace if we’re comparing it to everything else that we’ve heard so far on this release. The instrumental meanders along at a pleasant pace, incorporating some light percussion as things move along and just makes for a very relaxing listen. Kai’s vocals match the tone of the song, at times seeming to float along on an imaginary breeze while sounding like the sort of thing you might play on the radio while lounging around on a warm summer’s afternoon. Could you guys imagine if I wrote every review like this? Anyway, I definitely liked the light tone that both the instrumental and vocals on this track have and there’s some really nice subtle hooks that while not super obvious will definitely work their way into your memory over time. If you’re looking for a nice chillout tune for the summer then this is a song you’ll want to be checking out.

The single opts to close on its title track “Moonlight・Tokyo”. A rather uncommon thing by both Idol standards and just music in general, as normally you’d lead with the title track but I guess Kai makes her own rules. A very noticeable shift in tone coming off of the previous track, with the ears being blasted with very vibrant, full synthesizers pretty much right from the second that you hit play on this one. The song has a very bright tone to it, until the vocals come in and things get quite a bit more subdued. Quite a dramatic delivery from Kai here, though her tone is fantastic so it’s hard to complain even if things are helped along a little bit with a touch of vocal reverb here and there. The instrumental takes on an almost fuzzy quality as we go along which I thought was pretty interesting, though it’s kept from ever getting too out of hand by all manner of synthesizer effects and laser noises. I really liked the bass treatment on the drumbeat they used as well and felt that it really helped fill out the song and give it a bit more oomph. The vocals also lighten up a bit which I thought was good as it helped keep the song feeling fresh but I didn’t care particularly for the pitch or how close it came to being blown out at certain points. Fairly minor stuff in the grand scheme of things though, this is still a really good song and it’s very representative of everything else that’s on offer on the single which it should be as they’re both sharing a name.

“Moonlight Tokyo” checks pretty much all of the boxes for me as someone who is already pretty into City Pop, Techno and a bunch of other genres that were big in the 80s. The single definitely has a very retro, throwback feel to it that should appeal to most people who are already predisposed to liking this stuff too. If you’ve never really given all of this 80s stuff a try, dip your toe in with this release and see how it suits you.

I’m not really sure what Kai’s plans are as far as this solo career goes honestly. I’m not sure if the genres incorporated on this single are a one-off thing or if she plans to do more like it in the future. I certainly hope for the latter, but that’s just me. I do note that she recently started up another project with fellow Bellring Girls’ Heart alumni Yoneko so I guess we’ll just have to wait and see. I definitely want to hear more from Kai though so hopefully she won’t keep us waiting too long for another single.

Enjoy the content? Consider supporting the site on Patreon for as little as $1 a month.
Kaisingle reviewTRASH-UP!! RECORDS
0 comment
FacebookTwitterTumblrRedditEmail