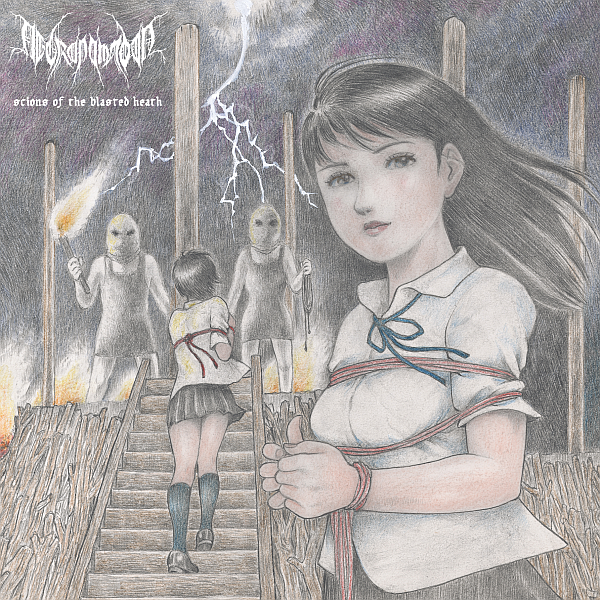 My thoughts on “scions of the blasted heath”, the latest EP from NECRONOMIDOL.

Its been a while since we’ve had a new CD from NECRONOMIDOL, with last year’s rather excellent “VOIDHYMN” album (review here) being their last widely distributed offering. Well, 9 months later they’re breaking their silence with new EP “scions of the blasted heath”. I know my review is rather belated compared to some of my peers, but I would like to take just a moment to thank the folks over a NECRONOMIDOL for sending me a review copy to check out. As always though, my opinions are my own and all of that boring disclaimer stuff.

So, “scions of the blasted heath” has 5 tracks as you can see, with several being composed by some pretty familiar faces at this point and also one less familiar face (well, I knew who she was anyway). It’s also the first widely distributed work to feature vocals from new members Kenbishi Kunogi and Michelle so that’ll be interesting to hear. The EP features artwork from manga artist Hayami Jun and you can expect all manner of Lovecraftian references and dark themes from the songs if the English lyrics I’ve been given are anything to go by. It’s NECRONOMIDOL folks, it’s kind of their thing.

Speaking of which, coming into this EP I’m not totally sure how to feel. My favorite member (Sari) isn’t in the group anymore so that kinda sucks and I don’t listen to too much live audio from Idol groups in general, so how the vocals are sounding these days is still a bit of an unknown too. I’m also not sure if it’s a good thing that I can almost guess what some of these songs are going to sound like before I’ve heard them due to the composers but we’ll have to see how it plays out. Necro usually put out some good tunes, I’m trying to be as open minded as can be about the new members and I’m also kind of excited for at least one of the tracks on face value alone. I’ve kept you all waiting for long enough though so let’s just get into it.

“SALEM” gets things off to a fairly familiar sounding start, which is hardly surprising as the instrumental is composed by none other than Kei Toriki. Responsible for previous Necro tracks like “psychopomp” and “END OF DAYS”, when I see his name next to a new NECRONOMIDOL track I usually have a pretty decent idea of what to expect. By that I mean an instrumental consisting of a plethora of blast beats accompanied by very distorted guitar riffs to create a very dense composition that’s almost like a wall of sound. That’s pretty much what happens on this track though there are softer, more melodic moments that I personally found to be of more interest but I guess I’m saying that as someone who is looking for something a bit different from the usual. Vocally things are very well mixed I must say so props for that everyone, and outside of that I think everyone puts in a good performance. It’s your typical airy tone, though not feeling quite as ethereal as previously heard…or maybe that’s just me. Not a bad song but at near six and a half minutes I don’t feel like we get very far from where we started by the end of it. Could definitely stand to shave a few pounds off of this guy.

“phantasmagoria cosmos” is probably the track from this EP that I was most looking forward to coming in. The instrumental is provided by Marianne Shinonome from Kinoco Hotel and I’m rather partial to their music so on the face of things this sees like a pretty promising collaboration. It didn’t quite go to plan though and I’m partly to blame. I think I expected a bit more of the Kinoco Hotel sound than I was ever likely to get which I’ll hold my hands up to. However, I definitely could have done with way less of the glitter and sparkles than we got here. I’m not typically a fan of that stuff to begin with but here it feels like it took a lot of the punch out of the instrumental. There’s a fairly catchy Rock track back there but yeah a bit muted, at least in my headphones. The vocals don’t fare too much better for me either, but it’s again mainly due to my own personal biases. Very Poppy, higher pitched stuff on show here and yeah if you’re into your more traditional or Anime sounding stuff then you’ll probably like this one quite a bit. It’s not really what I’m putting on a NECRONOMIDOL CD for though. Fairly disappointed if I’m honest, but Kinoco Hotel have put a new album out recently so I’m sure I’ll get over it.

Things pick up a bit on third track “the festival”. That is most definitely a Lovecraft reference for anyone who was wondering by the way. Zero-2 contributed the instrumental for this track and several others, including “WITCHING HOUR” and “SAMHAIN” which are both personal favorites of mine so promising stuff. The opening marching band meets death waltz instrumental is pretty cool, though maybe drawn out just a little bit too much. After that we’re well and truly off to the races though, with a super punchy, high tempo…Horror Punk(?) style instrumental. This is much more my speed I have to say and if you can listen to this one and not bang your head at any point then I don’t think we can be friends. Oh yeah, absolutely incredible guitar solo mid-song too by the way. The vocals rise to meet the instrumental in terms of punchy delivery and catchiness as well, though given they are being sung in the trademark Necro unsettling style they’re not quite going to get to the same level. That being said though, very enjoyable and I think everyone gave a very good showing on this track which is probably in part due to the less technically difficult lyrical structuring and vocal delivery. Easily my favorite track on the EP so far but I’m not totally sure it had to be almost six minutes long.

Fans of “dirge of baldr” will be happy to see composer Takeru’s name next to “CHILDREN OF THE NIGHT” in this EP’s liner notes. He definitely brought something new to NECRONOMIDOL’s wheelhouse with the very EDM style track he contributed to their “Strange Aeons” release. This time out we start things off with this very symphonic, Rock opera feeling instrumental which I must admit does sound pretty darn cool. When the vocals come in and the song takes on a much brighter…sparkly sound I found my enthusiasm start to wane a bit. Once again, very Poppy sounding vocals which would be fine if the delivery didn’t make them sound quite so rushed and high pitched. Maybe this one will end up growing on me, but for whatever reason it’s just a bit jarring still after the first few listens. Did I mention how disappointed I was with the instrumental by the way? Sure the symphonic Rock stuff reappears every now and then but having the rest of it be very muddy drums and sparkle effects just seems like such a waste to me. It’s like there was half of a good idea and for whatever reason the rest of the song just didn’t come together. There’s a bunch of potential here but I don’t think we’ve quite realized it which is kinda unfortunate. Props for keeping it under four minutes though at least.

Closing out the EP is “LAMENT CONFIGURATION” which features an instrumental by another familiar face in Okayan, who you might remember from such songs as “les tenebres sans visage” and “STARRY WISDOM”. When I hear a synthesizer hum into life at the start of a NECRONOMIDOL song I can’t help but get a little excited. My excitement did turn somewhat to confusion in this instance however, as I wasn’t expecting the instrumental to take on such an…anime feel. There isn’t really any spooky theme to speak of, just lots of pounding bass and a reasonably catchy synthesizer melody and more chimes/sparkles/whatever you want to call them. Fairly straightforward, repetitive stuff that works well enough for what it’s trying to achieve. On the vocal side of things I can’t really fault any of it honestly, everyone seems pretty comfortable with what they’re doing, the melodies are good and the chorus is fairly catchy. It’s a pretty good song really, but again it’s just not what I’m putting on a NECRONOMIDOL CD to listen to. I get that you want to vary things a bit every so often which is fair enough but I feel like I could hear a million of this type of song from any other Idol group out there. It’s also over five minutes long man, why though?

Can’t say I particularly enjoyed writing this review if I’m honest and I’m sure there will be people who aren’t that happy with what I had to say. I’m just being honest though, I’m not really sure what we’re doing here. I don’t think three of the songs had any business being over five minutes in length, the vocals are fine all things considered but I feel like we got more J-Pop than we did NECRONOMIDOL on this EP and the NECRONOMIDOL sounding stuff we did get sounded just a little bit too predictable. “the festival” is pretty fantastic though to be fair.

I don’t really get what the vision is for NECRONOMIDOL musically right now, maybe they’re still trying to figure out what the new members can handle vocally and the more Pop leaning stuff is here to ease them in. Or maybe this is just the new direction and we’re going EDM anime theme songs from here on out, only time will so I guess we’ll just have to wait for their next release to see what happens. If it makes you feel better, you can feel free to write this review off as me venting over my favorite member not being in the group anymore I suppose. Yeah, let’s go with that.

Enjoy the content? Consider supporting the site on Patreon for as little as $1 a month.
IMPERIET IVMini-Album Reviewnecronomidol
0 comment
FacebookTwitterTumblrRedditEmail