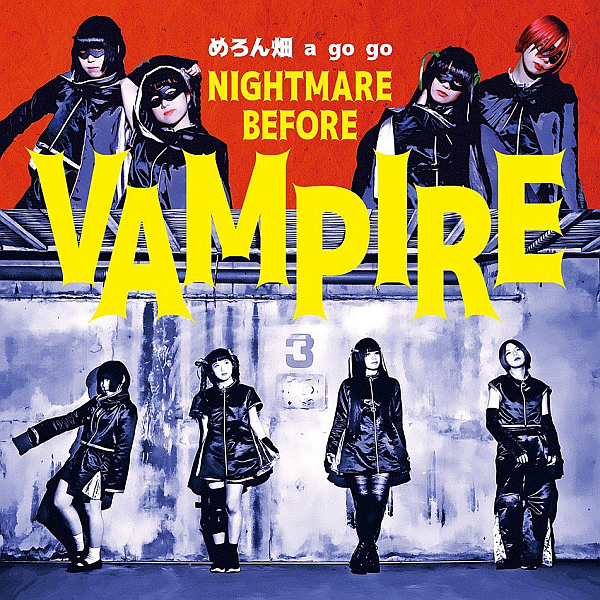 My thoughts on “NIGHTMARE BEFORE VAMPIRE”, the latest single from Melon Batake a go go.

I cover a wide variety of groups on the site over the course of a year. Even more so in 2019 after giving myself something of a challenge to get out of my comfort zone and write about stuff I might otherwise not have. I have to say though, nothing really beats writing about something that you’re really passionate about. Not that I don’t enjoy all of the other stuff but you know how it is, you just feel like you give a little more right? Hopefully that makes sense.

One group that the above definitely applies to for me is Melon Batake a go go. They’re by far one of my favorites groups right now and hell after the year we’ve been having it’s getting easier and easier to consider them my #1 group both in terms of the music they produce and the members themselves. If you’d told me a year or two ago I’d be a big fan of a Rockabilly Idol group who are also alien superheroes I’d have had a hard time believing you. Life works in strange way though and here we are.

“NIGHTMARE BEFORE VAMPIRE” is Melon Batake’s latest single. It has the unenviable task of following up their debut album “IKASUZE IDOL 1.2.3!!” (review here) which you simply must go listen to if you haven’t already. Seems like the usual faces are in charge of the composition and lyrics though so that should give everyone already familiar with the group a pretty good idea of what to expect. For everyone else, get your streaming service of choice opened and let’s all enjoy some super catchy Rockabilly tunes with a not so subtle Horror undertone.

Title track “NIGHTMARE BEFORE VAMPIRE” sets the tone right from the off with what will be some fairly familiar sounding guitar riffs to those of us familiar with both Melon Batake and Rockabilly in general I suppose. It’s kind of interesting how it, at least to me, does more to keep the tempo of the song in check than the drums do while also providing a decent amount of catchiness to the instrumental. Outside of that, the instrumental takes on that slightly unsettling air that features in quite a few Melon Batake songs and I think is something that they both do well and also makes them stand out from the crowd because it’s pretty unique. Vocally there’s quite a lot going on, of course you have Yuffie and Rukatama’s distinct low tones playing off of Nakamura and Run’s lighter, more playful vocals along with Melon Batake’s ability to make anything, even a phrase like “Nightmare before vampire” incredibly catchy somehow. Then there’s the side story of some poor guy being tormented/murdered in the background of the song all while the Melon Batake girls are singing “Ne oniisan?” to really drive the creepy vibe home. For some people this song might sound too similar to other works, but for me the vocals are catchy, it has a nice tempo and most importantly it’s fun…in a creepy, vampires praying on humans kind of way.

For the b-side we have “Still Monster Go Go Mansion” which, as best I can tell anyway, isn’t a cover or creative re-purpose of an existing song by a band that neither you or I have ever heard of before. Feel free to correct me if I’m wrong though. Opening with a tried and true bassline and drumbeat, the instrumental adds in some fairly sparse guitar chords that are followed not too far behind by the vocals. A fairly slow and steady opener in terms of both instrumental and vocal delivery, though you do get the feeling that the song is building up to something. This turns out to be a fairly simple but very effective chorus in which the vocals repeat “Monster Go Go” in a few different ways, mainly in how the “Go Go” part is emphasized. I imagine this goes over rather well in a live setting, at least that’s the impression that I’m getting from this studio version anyway. We repeat the build-up and the chorus a couple of times before an extended instrumental break featuring some mildly psychedelic synthesizer, a pretty impressive guitar solo and I think maybe even some banjo but don’t quote me on that. The song reaches a crescendo by way of another chorus before easing the foot off of the gas pedal and letting things naturally run out of steam. Very fun, very Melon Batake.

If for some reason you were expecting something radically different in sound from Melon Batake on this single then you’re probably going to be fairly disappointed. If on the other hand you were looking for more Rockabilly tunes with a bit of a creepy vibe and the usual Melon Batake antics then this single has all of that for you so you’re probably pretty happy about that. I personally really enjoyed this release, the songs are fun, the music catchy and that’s pretty much all I ever ask for.

You can never really predict what Melon Batake are going to do next, so who knows when we’ll next get a new CD from them. What we do know is they have a huge one-man live coming up in October and a whole bunch of other performances between then and now so they’re going to be keeping busy over the next few months. There’s also the small matter of a Rukatama solo single that came out at the same time as this one. I should probably write a review for that shouldn’t I? Stay tuned.