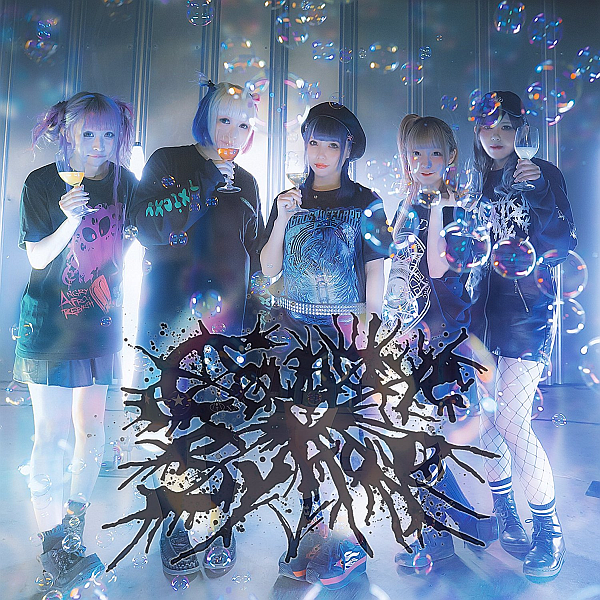 My thoughts on “WHITE RUSSIAN EP”, the latest release from Candye♡Syrup.

Well, there’s no point in beating around the bush I suppose. This review is going to be a bit awkward for me to write for a number of reasons, and none of them are particularly pleasant either. So as you can see, I’m going to be talking a bit about Candye♡Syrup’s recent “WHITE RUSSIAN EP” release today, a release I’d been looking forward to for a while. Unfortunately however, some recent developments have sucked a good amount of wind from my sails. I suppose I better explain everything in case some of you don’t already know by now.

So around the time this release was coming out, group member Hatsune Ichigo had been missing from a few lives due to an undisclosed personal issue. This would eventually culminate in her withdrawing from the group, a sad development but not uncommon in the Idol world. What was much more shocking was the news that came less than a week after this CD came out. All of the current Candye♡Syrup members would be graduating after their appearance at Saboten Con in Arizona at the end of August, and the group was to be rebooted with an all new line-up.

No official reasoning was given, and I’m not much for Twitter rumors but you can certainly find some interesting claims on there if you search hard enough. On the subject of this review, I wasn’t even really sure if I should bother writing it up or not. Obviously I decided to do so in the end but it’s going to be weird having this go up and then seeing Candye♡Syrup with an all new line-up perhaps only a matter of weeks later. Oh well, let’s send the current iteration of the group out on what is hopefully a high note and get this review started.

“SELENE” starts things off with the kind of chugging guitar riffs and pounding drumbeat that you’d expect from the heavier style of Candye♡Syrup songs. Indeed, we get close to a minute of this build-up before the song properly begins. When the vocals initially come in I was somewhat reminded of NECRONOMIDOL in a way but then Non started hitting those low growls and that comparison quickly went out the window. Having said that, this song is still pretty melodic with some pretty nice clean vocal sections wrapped up in the madness. Instrumentally is probably where I feel like the song gets let down the most. It’s not particularly bad but it’s a pretty vanilla Metal instrumental with a bunch of blast beats and somewhat muddied guitars for the majority of the proceedings. The synthesizer use was tasteful and added another dimension to the song however so thumbs up for that. Pretty decent song, just a bit paint by numbers on the instrumental side of things.

Next up we have “BreakDown Syndrome” featuring vocalist BARA from the band HONE YOUR SENSE. Not the first time that Candye♡Syrup have had a guest vocalist on a track but I believe this might be the first time they’ve had a male one. It’s pretty apparent right from the get-go as BARA makes his presence known, in fact he does the glut of the heavy lifting when it comes to the harsh vocals on this song. I’m not really sure why Non couldn’t handle more of it herself but it’s a little weird listening to a Candye♡Syrup song and hearing this much male vocal. As for the vocal parts the Candye♡Syrup members were responsible for, I’m not really sure why but I’m not really feeling their performance. It just feels a bit lackadaisical and doesn’t have the intensity to match the instrumentation that’s happening around it. It’s pretty catchy, I’ll grant it that, but it almost feels like there’s two songs playing at the same time or something. Once again the instrumental is fairly standard but I felt there was more variety in guitar riffs and drum patterns than on previous song “SELENE”. Not terrible but probably not something I’ll revisit in the near future.

We close things out with “WHITE RUSSIAN”, the song that this release is named after. Not only are we closing out this release but I suppose we’re closing out this chapter of Candye♡Syrup as well aren’t we? Right away and I’m hearing Digital Hardcore, a formula that most of the time ends up working very well for any group that uses it. That remains the case here with what for my money is the most enjoyable song on this EP. The balance of sugary Pop vocals and floor filling synthesizer melodies with Non’s harsh low vocals and the intense, aggressive guitar and drum instrumentation is perfect and makes it feel like all of the pieces of the song fit together incredibly well. Now granted it’s not the heaviest song in the world so I suppose your opinion might differ from mine depending on what you personally want to hear from Candye♡Syrup. That said, this is the style of music I would like to hear more of from Candye♡Syrup in the future but of course I’m sure there are plenty of you out there who would perhaps prefer something more like this EP’s other two tracks. That being said, this one gets a massive thumbs up from me.

So there you have it folks, the last release from Candye♡Syrup in their current form. Personally it was a bit of a miss up until the last track there but I guess they are trying to cater to a lot of very different musical tastes. It will certainly be interesting to see what the new line-up brings and if they can somehow manage to find a new harsh vocalist as good as the departing Non. Time will tell on that one I suppose.

Like I mentioned at the start of this review, Candye♡Syrup will actually be making an appearance at Saboten Con in Arizona in a couple of weeks. It’s going to be the final time this line-up performs anywhere so if you can it would probably be a good idea to go check them out. I’m sure they’d appreciate your support and if a bunch of you go it might make the convention more open to booking other Idol acts in the future. That’d be pretty cool, wouldn’t it?