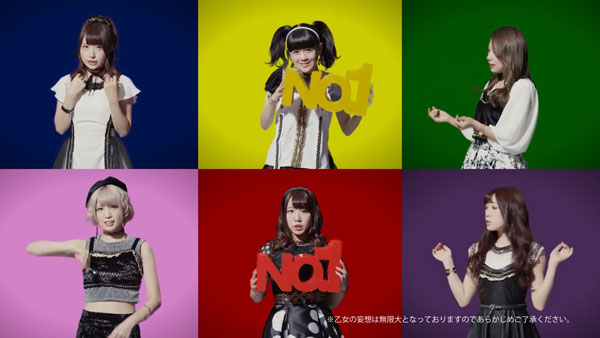 Moso Calibration continues on with their new electronic image, although slightly toned down for their latest release. In fact it flirts with being normal J-Pop. It may be missing some of the hype I’ve come to expect from the reinvented group, but a sharp presentation and a pretty unique concept make this a pretty nice video.

I’m not going to beat around the bush on this. The girls look fantastic. I’m pretty sure I’ve said this before, but it’s worth repeating. These girls have been quite the beauties lately. Futaba Nae has been my visual focus for a while. She’s the kind of girl I’d crush on hard. Lately though, short-blonde-haired long-as-hell-named Kurumizawa Mahiru is hard to see past. She’s pretty damn fine and dressed to show it off. The outfits for this one are dance-friendly tops and skirts with a black and white motif and gold accents on some of them. They look like something you’d see dancers wear, and they do a good job of showing off the girls without being overly showy. I know I dwelled on two specific girls but everyone looks great.

While dressed for it, the dance is pretty sporadic. What is there is pretty general jumping around and simple arm motions. It’s all well executed but there is a noticeable lack of choreography to it. Things take a turn for the better toward the end with the shots of the girls dancing in line, taking turns at center for the camera. I really love those shots. Great expressions and energy.

Dispersing the dance shot are a collection of various scenes that parody commercials of every kind imaginable. Phones, insurance, beauty products, you name it. All of the products are made up and named after the song. The execution on these is unbelievably good. Quite a bit of effort went into making these shots pretty damn authentic. The clips are complete with fine print, designed logos, even fully rendered CGI. They look totally real. I’ll give it props for being a pretty original idea. It’s a unique spin on solo shots for the members, but ultimately, I don’t know that it really adds or detracts that much. But hey, originality with idols is something that’s hard to complain about.

For the most part that’s all there is to the PV. It’s a nice one. Well filmed, original idea, good outfits, an okay dance. Despite that it’s just missing some atmosphere and hype that they’ve had in the past. I’m still digging the new Moso Calibration, but I do feel for fans who’ve lost one of the few dempa idols around. It looks like that kind of action is relegated to a B-side now, if given any attention at all.

As for the song, I’d say it’s very good. The vocals give everyone a chance to shine, and the chorus is catchy. The “Number One!” and “Happy People Lucky People” hooks are pretty memorable. The instrumentals are a bit generic but there’s enough tempo changes and depth to it to make it fun to listen to. All in all this one turned out pretty well.