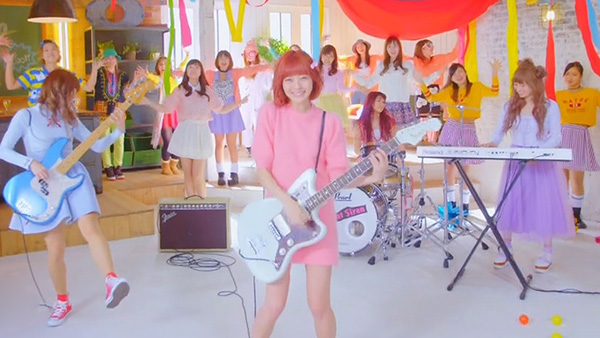 Silent Siren is one of those groups that I don’t particularly follow to a major degree, but always check out when they release something because it’s usually pretty fun. Luckily, this one follows that rule of thumb.

The video side of “Cherry Bomb” goes against the standard of Japan’s love for dull colors. I’m pretty sure someone blew out a monitor in the studio by turning up the color saturation so high. This PV is so bright, it would fit in well with a K-Pop lineup. This is totally a compliment in this case, though. It really makes you notice how nice the girls’ outfits are, and how awesome their hair dye jobs are. Very rarely do I like when a Japanese girl defiles the legendary kurokami, but Silent Siren all have really lovely hair colors. Umemura Hinako (the drummer) especially makes an awesome redhead.

This PV largely features one room in a party setting with plenty of extras having way too much fun. There’s nothing too serious about this PV, in fact it’s quite random. From male strippers to Twister playing, it’s just four minutes of silliness, with some occasional light dancing and nice band shots. It creates a fun atmosphere that compliments the song nicely.

Speaking of the song, it’s pretty typical Silent Siren. Pop fun with guitars is their thing, and they do it well here. It may not be the most memorable song of their line-up, but it does the job. The thing that really gets me about Silent Siren is their vocals. They have a VERY high pitched sound, which in general either ends up being used in an amazing way or a novelty bordering ridiculousness.

Silent Siren is always the former. Yoshida Sumire has excellent control and knows how to deliver some wonderfully high pitched singing that doesn’t sound the least bit obnoxious. Well, to my J-Pop trained ears anyway. I think the song’s pretty nice overall.