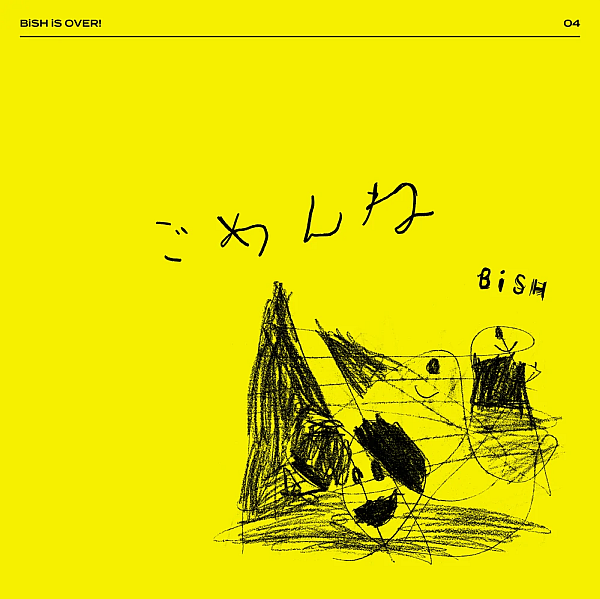 Some thoughts on “Gomen ne”, the fourth in a series of 12 monthly singles from BiSH.

Well its kinda been a minute since we did one of these reviews huh? Look man, I’m trying my best to keep up with all of these BiSH singles that they’re pumping out month after month but I got a life outside of this stuff too ya know? I suppose the title of this one is pretty fitting in a lot of ways isn’t it? Sorry for still being pretty behind on this series of articles but we’ve still got plenty of time…until we don’t anymore.

If you’ve been living under a rock, BiSH are apparently breaking up at some point next year. Nothing super set in stone just yet as best I can tell but that’s their story right now and they’re sticking to it. I’m still not 100% convinced it’s actually going to happen and there’s always a strong risk of hijinks when it comes to WACK groups in general. Not like another one of their groups has only recently pulled a very similar stunt but hey, we’ll go with it for now and play along.

So right now we’re (well at least I am anyway) about a third of the way through this 12 single series and for the most part its been a pretty enjoyable ride. Plenty of nostalgic throwbacks to much loved eras of BiSH’s music and not a whole lot of weird, experimental stuff to speak of. I’m sure that might change the deeper we go into this but for now I’m expecting more of the hit, popular styles that the group made their name on to keep appearing. Like right here.

Despite the title of the single, BiSH really have nothing to apologize for with this one as far as I am concerned. The title track is definitely more on the Ballad side of things if we must paint with very broad strokes but they’ve actually done some pretty cool stuff with the instrumental to liven things up some. It has this really nice twangy, mildly fuzzy vibe to it and just gives off this very warm aura which I’m usually pretty receptive to. Vocally yeah it’s a bit more standardized which isn’t super exciting but it does work very well with the instrumental so it’s not really a negative or anything. Some of the higher range stuff in the choruses might have felt a little abrasive at times I suppose but generally speak it’s a pretty enjoyable track.

B-side “SAKURA” is more along the Rock sort of direction, though the overall tone of the song does feel quite similar to the track that preceded it. Still quite different though, with more pronounced guitars and a bit muddier generally which isn’t something I really want from BiSH at this point in my life but it works fine enough and feels familiar and comfortable to listen to so it’s playing into that nostalgia trip idea quite effectively as a result. Vocally again it’s nothing we really haven’t heard before but they help to carry the song from point to point and there’s a few decent hooks along the way as well.

Like I said earlier, BiSH have nothing to apologize for here as this single is quite pleasant and enjoyable all in all. It adds a few more elements of their discography into the mix in this series and at this point it does sorta feel like we’re probably gonna end up covering just about everything in that regard by the time that we are done here. Pretty cool honestly, as they could have easily just done half a dozen of these in their house style and called it a day.

I’m still a couple of singles behind in my personal review series here and there’s still quite a few left to come in too, so plenty more BiSH coverage coming up on the site for the rest of the year and probably into the start of 2023 as well. Still not sure exactly what’s going to happen at the end of all of this but I’m just enjoying the ride as much as possible in the meantime. If they’re going to punk me then so be it, bring it on.