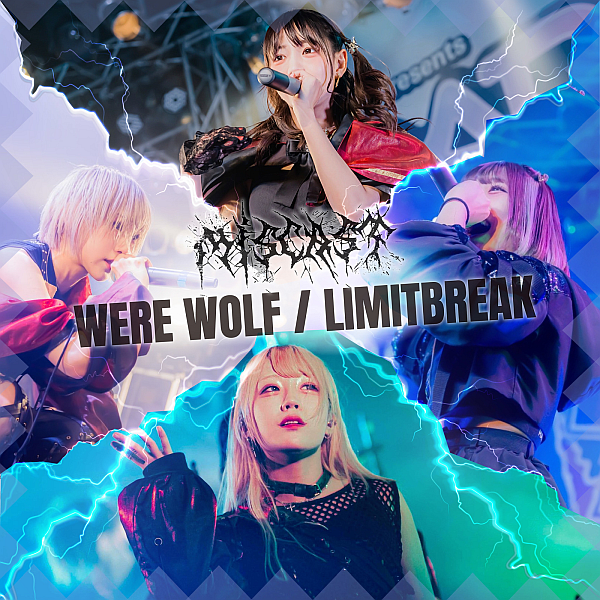 Some thoughts on “WEREWOLF / LIMITBREAK”, the latest (last?) digital single from miscast.

miscast have a pretty long and quite frankly complex history, even by a lot of Idol groups’ standards. They started out as Mistress in 2016 before changing to miscast around 2019 or so with many line-up changes along the way. It’s one of those interesting scenarios where a production company owns the name, music and such with the girls and their various producers being more like contracted employees in a lot of ways. Not too dissimilar to how the more mainstream, traditional groups do things but not really what you’d expect from one in the scene that I tend to follow on the site here.

By the time you’re reading this miscast will have disbanded after a final one-man live at the end of April. Funnily enough Mistress was relaunched in the Fall of 2021 so there’s that snake eating its own tail sort of thing going on here. Who knows if they’ll end up taking on most or even any of the mistress catalog, but given it’s all the same company behind it all then I can see it happening at some point down the line if it hasn’t already by the time you’re reading this article.

Anyway, to give miscast a proper send-off the group released a few singles in the lead-up to the inevitable. I’ll be checking out one of them here today and maybe I’ll write up the other ones too in time. I know this group was enjoyed by many, myself included, and it sucks that they’re no longer with but they left us with a lot of really great music and collaborations over the years so let’s give them our own send-off here and check out one or two more of them shall we?

So generally speaking this single your typical sort of Digital Hardcore affair which obviously has its own pros and cons at this point given how well explored that genre is these day. A couple of fine examples are on offer here, though I would say at times the harsh vocals probably come off a bit more comedic than intended, or maybe it was just the mood I was in while listening to them. I did find myself chuckling a bit though so make of that what you will. That’s probably the most noteworthy part of “WEREWOLF” though, for me at least because for that particular track everything was more or less what I’ve heard before in many other places.

“LIMITBREAK” has a bit more going for it, though it does largely pull from similar influences as the single’s preceding track. I did enjoy the energy and hooks a lot more though and it wasn’t such a straight up Digital Hardcore experience which at least for me helped to hold my attention a lot better. Don’t get me wrong, plenty of that stuff still going on but I dunno it just landed a bit better thanks to some stronger hooks and more interesting instrumental progressions I suppose. That’s music folks, some of it just hits different than others.

A bit late in the day for this review as I mentioned previously but I would imagine that anyone who is a fan of miscast or Digital Hardcore in general would probably have a pretty fun time with this single. The harsh vocals are a bit hit and miss for me but outside of that it’s a couple of very well put together songs that should easily hold up to the sort of stuff being produced in the genre over the past couple of years. Not reinventing the wheel by any means but it’s still a pretty nice wheel anyway.

I’ll probably get some words down on the final single from this iteration of miscast in the not too distance future here. I’ve written about pretty much all of their stuff in recent years so it seems fitting to see it out to the end. And hey who knows, maybe they’ll be back with a new line-up, name and who knows what else by that time anyway. It would be a bit of shame to have all of those songs go to waste now, wouldn’t it?