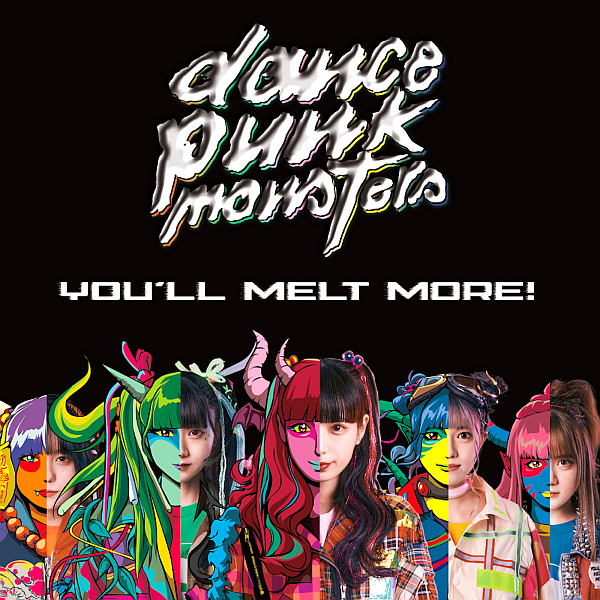 Some thoughts on “DANCE PUNK MONSTERS”, the latest mini-album from You’ll Melt More!

I think it would be fair to say at this point that You’ll Melt More! are something of an iconic group in the Japanese Idol scene. From being early trailblazers of the alternative Pop movement in the genre to ultimately cementing their place at or near the top of the pile with the famous line-up that everyone knows and loves. In a lot of ways they sort of did it all, and I guess that would somewhat explain why none of the “original” members are currently in the group anymore and instead have been replaced by some perhaps unfamiliar faces.

If you haven’t been paying attention over the past couple of years, You’ll Melt More! has undergone a rather dramatic overhaul in terms of both personnel and just the image of the group in general I suppose. There’s still the same off the wall, wacky vibe to everything but you definitely get the feeling that things have been updated for a slightly younger audience. Which makes perfect sense I suppose, though it might be a bit jarring to anyone who remembers the older iterations of the group, at least initially.

For a lot of people “DANCE PUNK MONSTERS”, the group’s latest mini-album, might be the first time they’ve heard from You’ll Melt More! in a while. I was sort of in that position myself, though I guess I did follow along enough to know the various things mentioned above. I hadn’t been paying super close attention to the music side of things however so 7 new tracks seemed like a great way for both myself and perhaps some of you to get reacquainted with one of the scene’s longer running properties.

There’s definitely a couple of the tracks that feature on this release like “Life is Simple” that are going after that TikTok, viral on the internet sort of audience and who can really blame anyone for doing so at this point really. That sort of things is almost more important than how “good” your music is these days so given this facelift that You’ll Melt More! have been given, the next logical step in the group’s evolution would probably be to carve out some of that market. The songs aren’t unenjoyable either, just maybe don’t go into them expecting something revolutionary and you’ll probably do just fine.

For longer terms fans there are more than a few tracks here that are likely to appeal to you too. I think “!! (Bibikkuri)” and “Mono Color” capture that old You’ll Melt More! spirit quite well personally and given that’s more my sort of “era” I guess it’s pretty easy to say that they’d be two of the more standout tracks here for me. On the whole though, there’s a pretty strong feeling of having fun and not taking things too seriously which is something that You’ll Melt More! have always been about.

I’m kinda curious to see what sort of reaction You’ll Melt More! are going to get going forward. There does feel like there’s going to be, or perhaps even “should” be something of a generational gap developing between the old and new lineups of the group. Maybe that won’t come to pass and I’ll be wrong but yeah, this new look group does seem like it’s going after a much younger audience than before. Interesting to watch either way.

If you’ve been following the group for years or only just recently got into them then I’d love to hear your thoughts on all of this actually. I doubt anyone will bother to get back to me but leave a comment if you feel so inclined. I like some parts of what they’re doing musically these days but also feel like others are a bit too newfangled for this old man. Does anyone else feel similarly out there or am I just shouting at clouds? Let me know if you have a minute or two to spare.