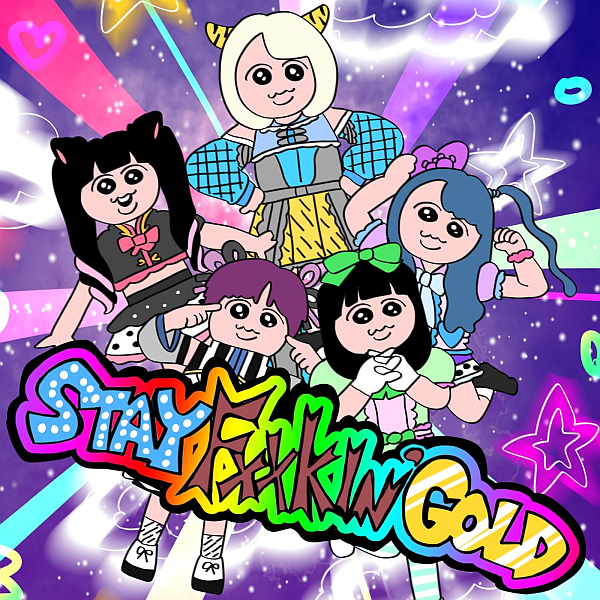 Some thoughts on “STAY FUCKIN’ GOLD”, the second album from PLANCK STARS.

Hiroshima has always had its own unique Idol scene, but it feels like in recent years it’s starting to really put itself on the map with several very entertaining groups leading the charge. One such group is PLANCK STARS, who I believe I’ve written about a little bit in the past here. I honestly wish I had been able to write about one of their many digital singles in the time since, but there’s just so much to keep up with these days that I have to pick and choose my battles and yeah, I’m probably dumb for not giving them more attention.

The group styles themselves as being “Warugaki” which basically means they’re a bunch of mischievous kids and for the most part their fans are treated and act in a similar fashion. A pretty neat concept in my opinion, which allows for all manner of stunts and hijinks to unravel in its wake. On the music side of things we’re looking at a mix of Rock and EDM styles, which I think you can kinda at least get a slight hint at from the group’s image and what have you. All in all a pretty decent concept from which to be building on.

The somewhat aggressively titled “STAY FUCKIN’ GOLD” isn’t only just PLANCK STARS’ second full-length album but it’s also a pretty cool reference too. The group has had a bit of line-up uncertainty in recent months but this 19 track beast of a release looks to keep the train on the tracks a while longer, heading into a major label release later this spring. I’m getting ahead of myself here though, I still haven’t shared my thoughts on this particular release and all of its…uniqueness. So strap in kids, it’s going to be a pretty wild ride but hopefully you might learn a thing or two about PLANCK STARS along the way. Wouldn’t that be cool?

It would be pretty much impossible for me to sum up 19 tracks (kinda, a few are really short) in just a few paragraphs here but I’ll try my best. Generally speaking “STAY FUCKIN’ GOLD” is a very energetic album which at times feels like it’s bouncing off the walls with how much exuberance and personality it has. There’s also a few quite real and unexpected topics covered in some of the lyrics which I thought added an extra layer and lifts it above a lot of similar releases in this genre, assuming you find value in that sort of thing as a listener at least.

The one downfall to putting out a 19 track album centered in one or two fairly specific genres is of course that some tracks are inevitably going to sound a bit similar. There are very clear (for me personally at least) highlights in songs such as “Zettai Angel”, “Loser Hero”, “Ore!” and a few others but it’s easy for some of the others to get a bit lost in the shuffle. That’s the case here, which isn’t a surprise since I don’t think this album was made with the intention of being listened to from front to back but I thought it was worth bringing up if you were planning on doing such a thing.

There’s definitely a lot to take in here on “STAY FUCKIN’ GOLD” and I think how you approach it is going to be key. It’s daunting looking at a list of 19 tracks and wondering where to even begin, but I think breaking it down into a few songs here and a few songs there would really help your experience and also stop that feeling of similarity from being too much of an issue. The bottom line is this is a very entertaining, quite deep album from a fun group that more people should know about if they don’t already.

Perhaps that’s still to come with PLANCK STARS though, with the release of their nationally distributed mini-album coming up in the next month or so. I’ll definitely be checking it out when the time comes and if you like anything you heard here I’d encourage you to do so too. Something a bit different to the stuff I usually cover on the site but go on, live a little why don’t ya?