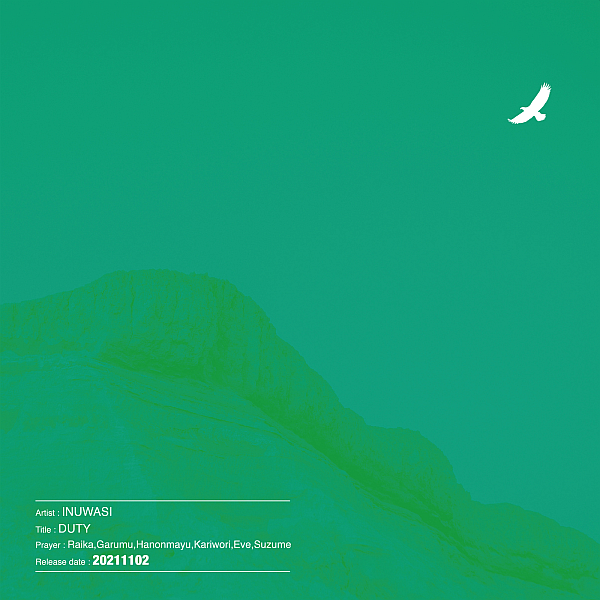 Some thoughts on “DUTY”, the recent album from INUWASI.

Well here I am back at it again checking out another recent release from INUWASI. It wasn’t too long ago that I checked out their “chimera” EP with full knowledge that the release I’m writing about now had either just come out or was coming out imminently, I can’t honestly remember! Could I have probably put off that last article and waited instead for this one? Probably, but then where would the fun be in that right?

I guess what I’m still trying to come to terms with when it comes to INUWASI is that the group hasn’t really panned out how I was expecting them to and it’s a little tough to just flip your expectations on their head like I’m pretty much being asked to here. I’m getting there but it might take me a little while yet and there is the small matter of me not being super fond of the vocal work on a lot of the songs for mostly reasons that are outside anyone’s control.

“DUTY” is the group’s new album and it has a bunch of previously released material, several tracks of which featured on the EP that I just recently wrote about. As such, I have a good idea of what to expect here but there’s also some new songs on offer and some ones I haven’t really spun in a while too. There’s also just the unknown of how they’re going to tie this all together into an album or if they’ll forgo the complete listening experience on favor of strong tracks that all stand on their own. Am I weird for thinking about music like this? Probably, but let’s get into my thoughts on this one instead.

I suppose the most telling thing about “DUTY” is that it doesn’t feature any songs from INUWASI’s first two EP releases. The spirit of them is carried over somewhat into tracks like “Darkness” or “Israfil” but for the most part it does seem like the group and their producers have moved on from that initial sound that captured the attention of so many people around the time that the group made its debut. Currently they seem to be focusing on a mix of Electronica and Rock with a good dash of fuzz to bring it all together in a fairly pleasing way as far as I’m concerned. Pick any track like “Emo.”, “Lapse” or “Hello Anonymous” and you should get a pretty decent feel for things on this release.

While I do enjoy quite a lot of what is going on with this release, there are a few things that I could see as potential snags for some when it concerns the overall listening experience. A lot of the tracks do sorta have a similar vibe to them in terms of the way the fuzz and synthesizers are being used so if you’re not paying a ton of attention it can begin to seem a bit repetitive. The vocals and their pitch also feel like they could be very take it or leave it depending on your preferences, I don’t mind some of it but there are times where I felt like a slightly more mature sounding take could have worked a bit better.

“DUTY” is a very enjoyable album so long as you come into it giving INUWASI as much of a clean slate as you possibly can. I know that might be difficult for some people but this does seem to be the direction in which the group is heading now so make your peace with it or don’t I suppose. There are a few things here and there that I hope they’ll continue to improve on with future releases but this is a really good starting point on which to build from.

INUWASI are a group on the rise and really how could they not be considering they have the expertise and knowledge of a production company like MAPLE Records behind them. In a…two year period where the world got turned upside down they’ve managed to navigate it all and find their footing in a scene that is unstable at the best of times. You can’t really ask much more than that and it should be interesting to see where their next few releases end up taking them.