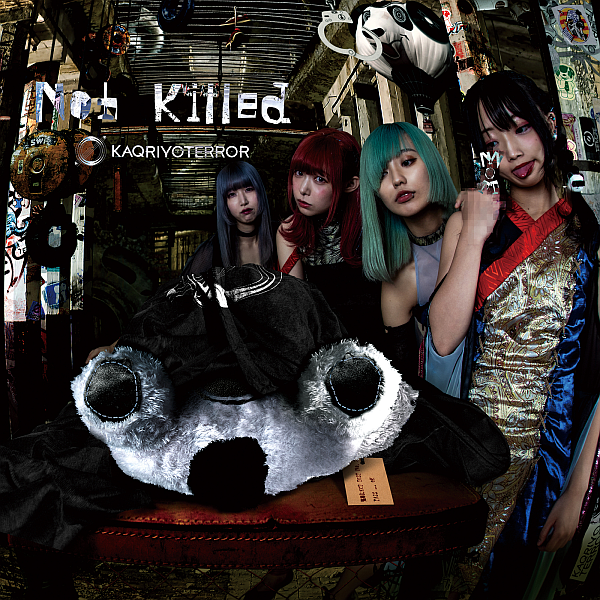 Some thoughts on “Not Killed”, the recent single from KAQRIYOTERROR.

It really does feel like I’ve been writing about a lot of codomomental releases of late and I suppose I have in a lot of ways as it feels like each of the agency’s groups is releasing something new one after the other. That is kinda how they tend to do things a lot of the time and with 2021 rapidly drawing to a close the temptation to get one last release in before the end of the year is always going to be there. I don’t think they’re done yet either but more on that in a future article I guess!

KAQRIYOTERROR haven’t really gone too far in either direction since I last wrote a bit about them as best I can tell. The group isn’t really struggling but it doesn’t feel like there’s a ton of hype around it either and you look at things like the recycling of costumes over several releases while their peers get new ones, no real movement on adding new members and it’s hard not to feel like maybe the group isn’t just treading water waiting for the inevitable to happen. Hopefully those fears are unfounded though.

“Not Killed” is the group’s latest single and features the b-side “MAD” which for some reason I feel like I’ve seen or heard before on something else just going by the title alone but I’m sure that couldn’t have been the case. Given the group’s very steady, don’t rock the boat trajectory of late I also wasn’t expecting anything too crazy out of this one before I hit play but I still hoped for a good time and enjoyable listening experience because KT are usually pretty good at providing that, all other things removed from the conversation. I just wish they had a bit more to

“Confusing” is one word that came to mind as I was listening to the single’s title track “Not Killed” as it sort of bounced between a variety of genres all in the first minute or so of the track. You had this really gritty Metal thing going on, then ambient synthesizers for a bit, then some Hip-Hop flows and yeah…I wasn’t really sure what they were going for here. On its own it all sounds pretty good but yeah, direction was a bit lacking for me if I’m honest. The track eventually settles into a bit of a mish-mash of everything so it all did come together in a way but it just felt like a really clunky way of getting there for me. Yeah, “confusing” seems like a pretty good way to describe this one but to their credit the vocals do a good job of what’s asked of them and that definitely did help this one out a bit.

B-side “MAD” ironically is probably the more conventional of the two track despite its title suggesting otherwise. It’s a pretty straightforward, synthesizer driven track that drifts between ambience and a harder, pounding style of Dance music which is all very reasonable and easy for the listener to follow along to. Vocally you also get a nice mix of melodies, along with some more Rap leaning parts where appropriate and yeah it’s a pretty well put together track that isn’t seeking to paint outside the lines too much. It likely isn’t anything you won’t have heard similar examples of elsewhere before but as far as composition and songwriting go, this is a very effective and competent track that seems like it would have a pretty broad appeal in my opinion.

I come out of my experience with this new KAQRIYOTERROR single with similar thoughts to those that I had coming in. There’s nothing too controversial here so it’s not really crazy in any regard but it’s also not really doing too much for the group from a musical standpoint either. I know music isn’t the be-all, end-all for Idol groups but it does help to give them a personality and again I’m just not sure what KT’s is right now.

So yeah, a decent enough single that keeps KAQRIYO on this very safe and smooth trajectory where they’re not really in bad shape but they’re also not really upping their stock too much either. That’s my opinion anyway, feel free to disagree. I just wish the group had a bit more of a push behind it because while far from their heyday at this point I know that they can do a lot more interesting things than they have been of late when they have a bit of momentum and fire behind them. Hopefully some of that will come back in 2022 but I guess for now I’ll be keeping my powder dry for a while longer.