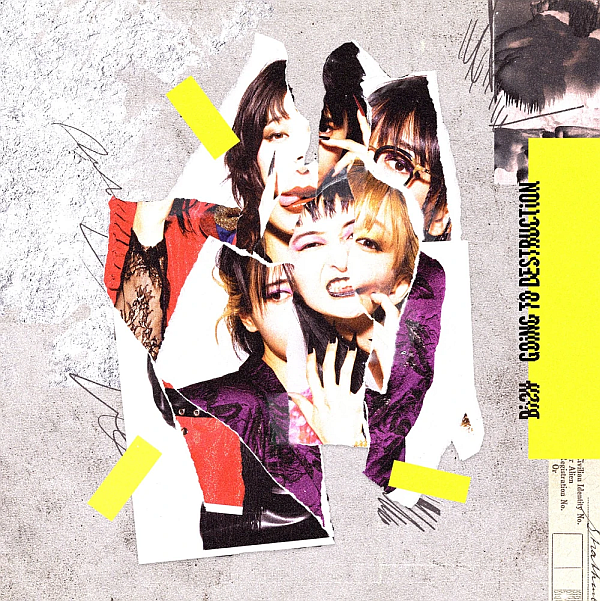 Some thoughts on “GOiNG TO DESTRUCTiON”, the latest album from BiSH.

BiSH are hardly in need of much in the way of an introduction these days, as chances are if you follow Japanese Pop music in any capacity you’ll have likely at least have heard their name come up in passing at some point. Honestly, they’re probably one of the biggest successes of the Underground/Alternative Idol scene in a lot of ways, as I can’t really think of too many other groups who have achieved similar levels of fame and mainstream success as they have in all of my years of following the scene. Not many groups I know get invited to appear on various nationwide television music shows, that’s for sure.

They’re not very underground these days then but the group still pays a lot of lip service to the more alternative genres of music, even if it does sort of feel like they push the envelope just for the sake of it a lot of the time in recent years. The group’s last album “CARROTS and STiCKS” really did divide opinion musically, with a lot of the songs featured being very heavily distorted or otherwise harsh in tone and I personally wasn’t a huge fan honestly, despite being fairly predisposed to liking more distorted, fuzzier genres such as Shoegaze and what have you. It felt like it was trying a bit too hard I suppose, though I know many people who will passionately disagree with that sentiment.

BiSH haven’t been the most musically active during much of the pandemic but they’ve had a few digital singles along the way, and it’s all culminating in their latest album “GOiNG TO DESTRUCTiON”. A 14 track behemoth featuring tie-up songs from TV shows, video games and who knows what else at this point. The styling is fairly consistent with the direction the group has been heading in for a while now but I hadn’t really been paying too much attention to what they’d been putting out recently so a lot of these tracks had rather passed me by. It did make for everything being fresh though which I think might have actually benefitted my opinion of this release in many ways. It definitely had a few surprises and wasn’t what I was expecting at all really which was nice.

In many ways “GOiNG TO DESTRUCTiON” is as refreshing as it is nostalgic. BiSH have really gone back to the “GORiLLA BiSH” era on a lot of the tracks that feature on the album and have for the most part foregone a lot of the distortion heavy, loud for the sake of it material that dominated the “CARROTS and STiCKS” release that followed. You do still hear a little bit of it on songs like “STORY OF DUTY” and to a much lesser extent “ZENSHiN ZENREi” and “I have no idea” but for the most part that style doesn’t feature at all and I’m personally rather happy about this as it really wasn’t doing a whole lot for me in such heavy doses.

What we’re left with then is the sort of music that I think BiSH does best. You’ve got the emotional ballad-y stuff like “WiTH YOU” and “BROKEN” which make a few very small tweaks to a very comfortable formula, but there’s never a question when it comes to the passion or quality of the vocal performances. Then of course you get the more energetic, very dynamic Rock material from the likes of “in case…” and “Kuruu Kuruu”, with those being two of the more standout examples of this and there’s even a few orchestral leaning offerings by way of “STACKiNG” and the absolutely incredible “MY WAY”. Lots of really great familiar, but not totally, sounding BiSH material on this one.

With all of that being said, the group do also dabble with some less common sounds and influences on a few tracks across the album. “CAN WE STiLL BE??” with its very light Hip-Hop and Spanish guitar influences, as well as “Kuruu Kuruu” with its Middle Eastern leaning instrumental being the two that stick out most clearly in my mind, but there were quite a few times over the course of the release where I found myself going “Oh, that’s a bit different” and at least as far as I’m concerned that’s a nice thing to be able to say about a WACK release these days. Especially when it’s actually for positive reasons and not negative ones.

I was very pleasantly surprised by “GOiNG TO DESTRUCTiON” on the whole, as I really didn’t think that I would end up enjoying as many of the tracks featured as I did or even all that many at all honestly. The album does still feel a little bit long at 14 tracks and I think they could have quite easily trimmed a couple from the tracklist to tighten it up a bit. For all of its positives there are still a couple of fairly cookie cutter offerings here that I could have done without personally and it’s mainly where the vocals fell into that very comfortable tone and cadence we’re all very used to at this point.

That said, I would definitely recommend this album to lapsed BiSH fans and really just anyone looking for a really good J-Pop record with a bit punch and personality to it. Tracks like “in case…”, “ZENSHiN ZENREi”, “Kuruu Kuruu” and “MY WAY” were all personal highlights for me but really there were so many that just picking those four almost seems unfair. Easily my favorite WACK release of the past couple of years, no doubt it my mind, and I actually am rather looking forward to see where BiSH take things from here. Not something I ever imagined typing when I started listening to this album, but music is kinda funny like that though isn’t it?