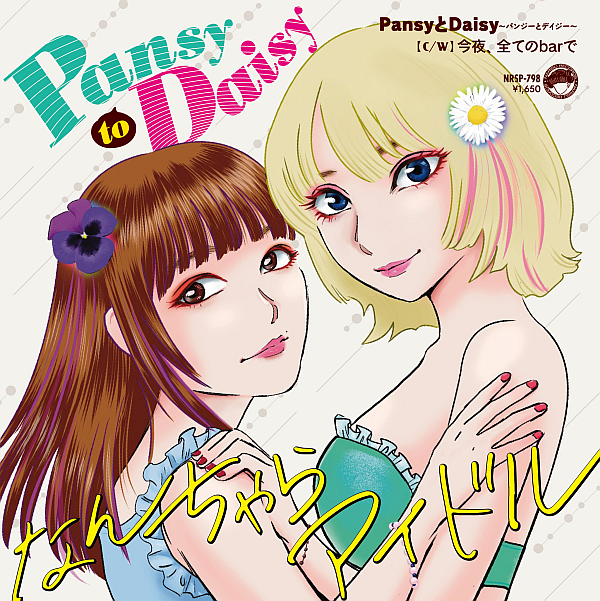 Some thoughts on “Pansy to Daisy / Kon’ya, subete no Bar de”, the recent RSD exclusive single from Nantyara Idol.

Nantyara Idol, the duo of Misami Mami and Aoharu, has been a fixture of the Japanese underground music scene since the group’s formation back in 2014. In those 7 years only 4 different members have comprised its line-up, a feat perhaps just as impressive as the group’s near decade long existence in what is a rather unforgiving industry. A dedicated fanbase and a willingness to not only take risks but also push the envelope have played a big part in all of this as has the group’s music which spans multiple styles and genres but with a general leaning towards a more retro and at times even Lo-Fi Pop sound.

This can all be heard on the group’s first album “Sayonara Odyssey” which only released towards the end of last year. As much a celebration as it is a compilation of Nantyara Idol’s at the time 6 going on 7 year back catalog and in my opinion easily the best place for any prospective new fans to give the duo and their music a try. That’s pretty much what I did, even though I obviously knew of them previously and that album actually ended up being on my favorite things to come out in what was admittedly a rather truncated year when it came to music being released from Japan’s usually bustling Idol scene.

“Pansy to Daisy / Kon’ya, subete no Bar de” sees Nantyara team up with longtime Idol supporters Narisu Records to release a fun little 7 inch vinyl single in collaboration with the very popular Record Store Day. Love it or hate it, said day usually offers up a cool Idol release or two and as a bit of a vinyl junkie and Nantyara Idol fan I was pretty excited to get my hands on this one. If you’re into vinyl there’s also a digital streaming option for lead track “Pansy to Daisy” and b-side “Kon’ya, subete no Bar de” also got a music video a few months back which I’ll embed below for you to check out too.

Both tracks on the single hit a nice nostalgic sweet spot for me but each in a different way which made for a rather fun listening experience. Neither style of song here is anything that’s really all that new to Nantyara as they’re well within their wheelhouse but it’s a very comfortable and enjoyable place to be so it’s hard to blame them really. “Pansy to Daisy” is the flashier of the two tracks with its very upbeat, Jazzy instrumental that both Mami and Aoharu expertly provide Lounge style vocals over the top of. The lyrics are as colorful in their tone as the brass section is in its and the end result is sure to be hit with anyone with a fondness for this style of music.

“Kon’ya, subete no Bar de” takes on a more Lo-Fi approach to things and the track in general has more downbeat mood despite there being several similarities when it comes to the sorts of instruments that are being called up to make up the instrumental. A sort of rainy, City Pop vibe going on and the mood is further driven home by the vocals which are at times almost sighing out the lyrics which I think works really well here actually. Not the most energetic of songs, more of a chillout kind of thing I guess you could say but still very enjoyable to listen to despite being pretty much the polar opposite of the a-side here.

Prospective new fans of Nantyara Idol are probably better served checking out the duo’s album “Sayonara Odyssey” that I mentioned earlier but if you want a slightly less daunting first experience then I think “Pansy to Daisy” provides enough of a snapshot of their discography to give some idea of how their music can sound. It misses out quite a bit too though so if you can find the time then the album is definitely the way to go in my opinion.

Long time fans and people more familiar with the group probably won’t have been too surprised by what’s on offer here but seeing as how it’s pretty much playing to everyone involved’s strengths and working within the sort of genres that people who already love Nantyara are looking for there shouldn’t be too many disappointed faces either. I’m glad I grabbed the vinyl copy and would encourage you guys to as well if that’s something that you’re into. Hopefully we’ll hear more from Nantyara on the music side of things before too long as I really do think that they’re vastly underrated and they’re easily one of my favorite groups who are active currently in the scene.