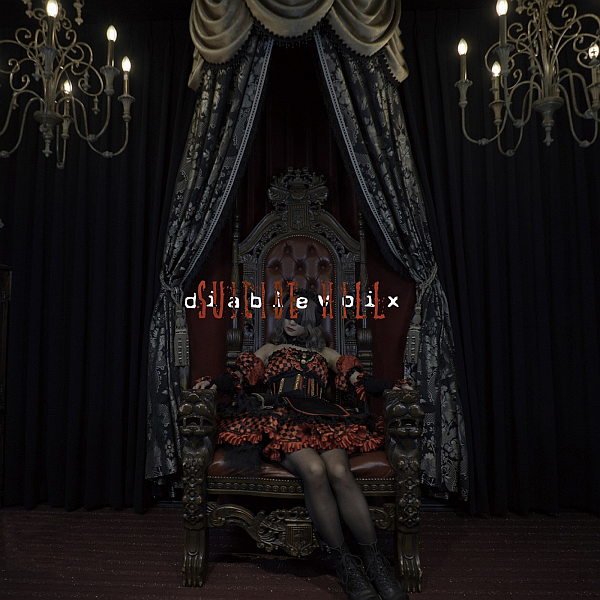 My thoughts on “SUCIDE HILL”, the fourth single from Diable Voix.

Solo idols man, there aren’t enough of them and the ones that we do have don’t get anywhere near as much love and recognition as they deserve. Maybe I’m bias but there’s just something about an Idol going it (mostly) alone and putting themselves out there with pretty much no safety net as they are the entire act that’s performing on stage. Hard not to admire and maybe even be a little bit inspired by someone like that and sometimes the music that they’re performing is pretty good too even!

I’ve written about Diable Voix on the site before, but it has been quite some time since Haluka has been able to release some new music, though in that time she has been hard at work like always performing multiple times per week all over Tokyo and working on the single that I’m going to be talking about here today. If you’re not familiar with Diable Voix, the project sees Haluka lend her powerful singing voice to various styles of Rock music to the more emotional Ballad-y stuff, and she even busts out a scream or two as well on occasion. I think she’s great, is pretty much what I’m trying to say.

“SUICIDE HILL” is the very…heavily titled fourth single from Diable Voix and features 4 new tracks from Haluka as well as a bit of an image change from the much lighter tone of her previous costuming. I know you should never judge a book by its cover but the very strong overtones here are sort of leading me to believe that this one might be a bit on the darker, potentially heavier side of things. I could be completely wrong though but ultimately I’m just happy to get some new songs from Haluka honestly, so with all that being said let’s find out just precisely what she has in store for us on this one.

A haunting piano melody sets the tone for things early on for the single’s opening track “remind” before slowly starting to build in some drums and guitar to flesh things out a bit more. We eventually arrive at this really cool Electro-Symphonic arrangement which continues for a time before the track transitions into the first verse where things are brought back down to just the guitar and drums to let Haluka have some room to flex her vocals. The performance is quite light in tone but while also having a bit of that dark energy coming over from the instrumental as well with the melodies pretty much playing a similar role that the synthesizers had been playing previously. It is a bit of a Ballad sure but with a spin put on it that you don’t really hear too much lately and it feels like there’s actually a theme here as opposed to song acts who sort of just throw a Ballad style vocal into their usual instrumentation and call it a day. The mid-track breakdown provides a much needed clearing of the air and we’re treated to a pretty epic guitar solo too which is never a bad thing in my book. I suppose the choruses could have maybe stood out a little bit more in my personal opinion but I kinda get the vibe we were going with here and it might have thrown that off a bit too much if there had been a crazy powerful chorus. Haluka is more than capable of such things though, as we’ll hopefully hear a bit further into this single.

We continue the dark, Electronica meets Rock direction into the single’s second track “arcana”…well, that’s where it sounds like things might be going at least until Haluka decided to kick things up a notch with a very impressive low growl which sees the instrumental take a very heavy turn with lots of chugging guitar riffs and thunderous drumbeats washing away any of that Electronica component that never even really got a chance to establish itself before the onslaught began. They do bring it back a little bit as the song progresses and Haluka also gives us some vocals that are bit more on the melodic side and in a somewhat similar style to those that we heard on the previous track as both styles trade off against each other in a rather complimentary way I have to say. Things do mellow out quite a bit as the track continues however, which is a little disappointing to me but I can see the thought process behind that initial outpouring of energy and emotion being a release of sorts and then the rest of the track settling into this more atmospheric, calm style so as to be the aftermath of it all if you will. To touch on the choruses briefly, they have this very classical feel to them both in terms of how the vocal melodies are structured as well as the lighter symphonic tone of the instrumental and yeah I think it’s pretty fitting for this sort of track. Maybe a bit too much of a similar thing given the direction things ultimately took but it’s a really nice listen and hearing Haluka bust out the harsh vocals is always nice. Definitely worth a listen in my opinion.

Three tracks into the single and its title track “SUICIDE HILL” is finally up to bat. As you might expect from the title, there’s a pretty eerie feel to this one with a sort of haunted cabaret tone to the synthesizers that are providing a catchy melodic component over the top of the base instrumental layer of guitar distortion and a groovy drumbeat. Haluka’s vocals also have an appropriately haunting quality to them as she further adds to the melodic side of this deceptively heavy track, with some particularly chilling childish tones also making an appearance every so often to really drive home the mood that we’re going for here. It really is very well crafted from an atmospheric point of view and there’s definitely a catchiness to it all the belies the dark tones and subject matter involved. The choruses are a bit brighter by comparison and definitely less heavy in the sort of tone and emotions that are being conveyed too, almost to the point where it might not quite work with the rest of the track but I think enough of that eerie undercurrent was carried over to make it not feel all that out of place. The hooks are also sort of angled more towards the verses than the chorus on this one too which is a bit different to the typical flow of things but again it all works out and there’s plenty of them to go around if you care to listen out for them. Add in another intense mid-song breakdown paired with a cool guitar solo and there’s plenty of talking points on this one besides just the title, that’s for sure.

Last up is “Amaoto” which is basically the sound of rainfall if anyone was wondering. I wouldn’t say there’s any obvious tie-in to that from the instrumental side of things on this track, and indeed there isn’t much to tie this one into the rest of the songs on this single either. What he have here is a rather funky sounding Pop tune which I guess in some ways is probably serving as the “Ballad” option on this release, though there are elements of that genre on the 3 previous tracks too. Nice bright guitars and a catchy piano melody drive the song for the most part and like I said earlier the tone couldn’t really be any more different. It gives Haluka a chance to sing a lot more “normally” though which I liked as I think she’s a really good singer and you maybe don’t get to hear just how good when she’s putting on more of a persona or bringing in all of these other bells and whistles on the single’s darker, more atmospherically driven offerings. Here she’s just doing what comes naturally to her and the result is a very lovely performance full of warmth and some very soothing melodies. There aren’t really any super flashy moments outside of a guitar solo or piano part here or there but I think we’ve almost had our fill of those already here so this track while being very different also feels like a really nice, positive note to end off on. It might be a bit too different to everything else on offer for some but I can appreciate this track for what it is and I had a really nice time listening to it.

Yeah, “SUICIDE HILL” has a somewhat provocative name but if you’re able to look past that then what you get here is a single that’s big on building atmosphere and taking heavier, more abrasive styles of music and putting a slightly more melodic twist on them. You also get Haluka’s vocals on top of all of that and she really does put in some great performances both technically as well as with all of the feelings and emotions that she’s able to convey while doing so. Underrated is probably a good word to use when it comes to this particular soloist I think.

So yeah, hopefully a few of you guys reading this will give Diable Voix a listen if you haven’t had the chance to do so already. I really like Haluka and respect her work ethic and how she tries to push her vision for her music and performances and hopefully some of you guys can recognize all of that too. I suppose I’ll probably have to wait another year or more for her next single which is unfortunate, but the wait is usually well worth it and thankfully she recently put up a compilation of all of her songs to stream so at least I can tide myself over with her back catalog until that time comes.

Enjoy the content? Consider supporting the site on Ko-Fi for as little as £1.
aLIVE ENTER PRISEDIABLE VOIXsingle review
0 comment
FacebookTwitterTumblrRedditEmail