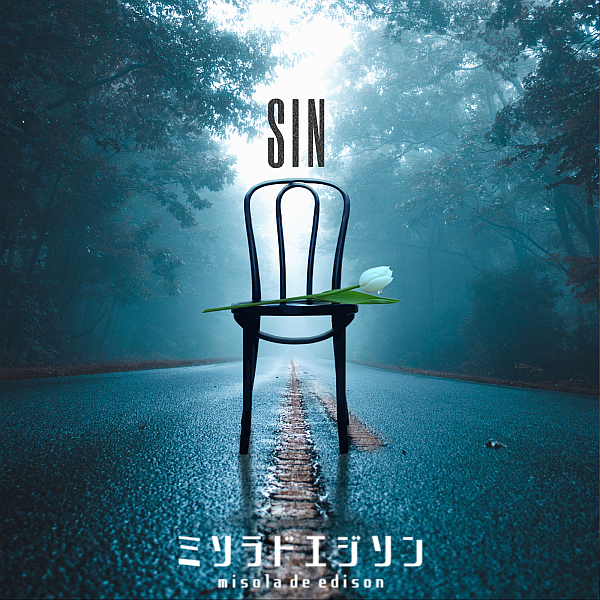 My thoughts on “SIN”, a recent digital single from misola de edison.

Most of the reason why I run this website and put out the content that I do is to hopefully share some new music and artists with anyone who happens to stumble across it. It also gives me an excuse to listen to a bunch of music that I might not otherwise take the opportunity to do so, though that has been an area where I’ve been slacking somewhat of late. It’s not totally my fault of course, for obvious reasons, but I would like to try to get back to it and write about some less well known groups instead of my usual wheelhouse. So let’s try to that here today and take a look at a group that I’ve heard about but never really listened to.

misola de edison are a currently (at the time of this release anyway) 2 member group, though they did start out with 3 when they debuted last August. Their self proclaimed theme is “Science Fiction Rock” which sounds pretty cool and the group’s tagline is “Life is an experiment”. They live up to their theme with a mildly futuristic look to their costuming and their lyrics and songs are loosely constructed with the idea of being short stories. A pretty compelling sales pitch that’s for sure, but how things actually play out on tape of course remains to be seen here.

“SIN” is the group’s latest digitally distributed release and comes in the form of a single featuring 2 tracks. The do actually have an album under their belt called “IF” which came out last October, along with another single titled “Kokorokokonoka / Phantom Marriage” so if any of you, or even I for that matter, like what you hear then there’s plenty of other material from the group to go check out after we’re done here. That being said, I suppose I shouldn’t keep us all hanging around any longer so let’s hit play and see just what misola de edison are all about…finally.

You definitely get a Sci-Fi vibe right away on the single’s lead track “Nigere wa shinaindesu” but there is also a really strong Classical element to the track’s instrumental which I think makes for a pretty cool contrast actually, and both styles are blending in such a way so that they compliment each other rather nicely too which is a plus. Maybe not quite the Science Fiction Rock that I was expecting but still a pretty interesting listen all the same. A bit disappointing then that they really empty the instrumental out when the vocals come in, giving them more than enough room to do their thing. The tempo of the delivery feels pretty comfortable for all involved and not too much post production until they start to get into this sort of Rap style which I must admit I didn’t really see coming and the instrumental also shifts into more of a Trap style at this point too, so quite a lot going on here and somewhat hard to follow initially if I’m being honest. The choruses bring back more of that Sci-Fi meets Classical style we heard at the start of the song though and the tempo is pretty quick and catchy so it’s a pretty enjoyable listen when coupled with some equally catchy lyrics. Again, not really sure that the verses really went in the direction that they perhaps should have but after a couple of listens the track is starting to grow on me and I think I’m starting to get what they’re going for here. A little tough to wrap my head around but I think it’s generally a decent song despite that.

B-side “Ame yadoru machi no naka de” gets off to a very atmospheric start with a solo vocal performance being accompanied by the sound of falling rain and the occasional synthesizer scratch that’s there to hint at there perhaps being a little something more to this one than the admittedly rather pleasant and serene tone on which it opens on. A bit of a Chill-Hop vibe develops with the introduction of the other members’ vocals and a bit more of a synth beat before we get a very small drop of sorts and the song explodes into this very bright, ambient synth style arrangement with a little bit of an orchestral element hiding underneath to sort of keep that theme running I suppose. A little bit of a Ballad feel to things on the vocal side of things, though they do keep things feeling pretty fun with the odd quip or quick rapid-fire line delivery adding a little bit more pep to the track. Again there are quite a few styles being thrown at your ears on this one but I think the way the track is constructed and how they interact is probably a bit cleaner than the previous effort on this release. It just feels a bit more coherent to me but I do prefer things play more on the conventional side rather than trying to challenge me too much while I’m trying to just relax and listen to some music. A pretty entertaining take on what is more or less a Ballad when you really boil things down and that’s something that I can always appreciate.

“SIN” is a pretty quirky single on the whole and as my first introduction to misola de edison I wouldn’t say that I’m totally sold on their music, but I do feel like I want to check out more of their material before I really make any sort of judgement on that. As such, I think their album “IF” is probably going to be my next port of call on that front and I think it’s the best place for any of you guys to start too if you liked what you heard here. Definitely a group deserving of further listening either way in my opinion.

It’s always good to get a chance to feature these less well known or less appreciated groups on the site, because even if you or I don’t end up making them our new favorites there’s always the chance that someone else out there might. That can never be a bad thing in my opinion so hopefully that is something that’s actually happening from time to time and I’m not just sitting here talking to myself every week.

Enjoy the content? Consider supporting the site on Ko-Fi for as little as £1.
indieMisolade Edisonsingle review
0 comment
FacebookTwitterTumblrRedditEmail