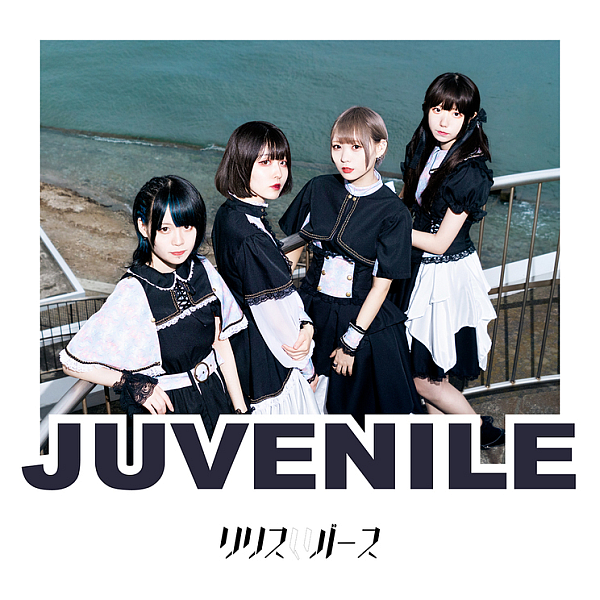 My thoughts on “JUVENILE”, the first mini-album from RILISREVERSE.

Idol groups come and Idol groups go, most change their line-ups at some point, some even change their names or their gimmicks entirely depending on the situation. It’s all a part of the constantly growing and evolving scene that we’re all taking part in, and even if you don’t like this sort of stuff when it happens it’s just something that you have to come to accept or you’re going to have a really hard time enjoying yourself in this particular hobby.

I’m sure we’ve all had our favorite iteration of HAMIDASYSTEM over the years. I was particularly partial to the 4 member version of the group myself but I know plenty of people who also loved the 2 member line-up that released a fantastic album in “down” (review here) and in a lot of ways were gone much too soon. Oftentimes Idol is a fleeting thing, to be enjoyed while it’s with us and then looked back upon fondly once it’s gone. Man, that sounded almost poetic for a second there.

Anyway, RILISREVERSE are somewhat of a spiritual successor to the final HAMIDASYSTEM line-up, at least as much as a group formed by the same agency and featuring the two members of the final line-up can be anyway. I’m not sure if this will be a straight continuation of the sort of style HAMIDASYSTEM were working with, but I’m expecting something Electronica related here at the very least. I’m also hoping that maybe the vocals will have a bit more variety now that there are 2 more voices added to the mix. That’s a lot of assumptions on my part though, the only way to know one way or the other is to hit play and start writing.

I said that I was expecting Electronica and that’s exactly what I got from the mini-album’s title track “JUVENILE”, which wasted very time before launching into the instrumental’s most distinct synthesizer melody which is accompanied by a rather ear pleasing beat. Pretty repetitive stuff I must admit, but it does a good job of burrowing into your brain and setting things up for the opening verses. Speaking of which, the song takes on more of an 8-bit tone when vocals are first introduced and holds onto that for pretty much the rest of its duration. It’s pretty low impact but that’s probably for the best as the vocals are pretty low tension and melodic which makes for a nice listening experience but it’s probably not where most people would think that we’d have ended up after that opening section. They do push things a little bit harder for the choruses though, with the beat picking up a bit and the vocals taking a bit more energy and also exploring the upper limits of their range a bit more. A couple of nice lyrical hooks also make for a pretty bright and memorable moment or two throughout the track. The last minute or so was probably my favorite part personally as it felt like things really found their rhythm and started to flow together really well, and the melodies on both the vocal and instrumental sides of the track were both particularly strong here too. This might sound a bit weird for a song with a fairly flashy instrumental but I though this track was a bit understated at first but it grew on me quite a bit after a handful of listens.

Second track “Natsuiro” introduces a slightly more ambient brand of Electronica into the equation, with some muted synthesizer melodies being paired with aggressively fuzzed beats to make for an instrumental with quite a stark contrast in textures. They do ease off on the distortion as the track develops which I think was probably for the best but they also keep enough of it around so that you know it’s there, it just isn’t quite so in your face as it was initially. The addition of guitar also alleviates some of the demands being placed on the drums and allows for some more dynamic shifts in tone too. I’m actually a big fan of the tempo that this track is set to though, and I’m also really enjoying the melodic vocal performance that’s being weaved into the instrumental as well. Again, it’s not this super high energy affair but it doesn’t need to be with the mood that was created by the instrumental at the start of the song. Subtleties and complimenting melodies seem to be a theme that’s developing early on this release and there’s a decent amount of variety both in terms of tone as well as lyrically. High notes also seem to be something RILISREVERSE are putting a focus on as there’s several more of those soaring, almost ethereal moments on this track too. I personally have to be in the mood for that kind of thing but they’ve definitely been doing a good of job of getting me there so far. This mini-album is actually turning out pretty well actually.

“Ambivalence” – the state of having mixed feelings or contradictory ideas about something or someone. It’s also the title of this mini-album’s third track and I have to say that I don’t feel all that ambivalent about this one folks. I really like the treatment on the track’s fuzzy, daydream-esque Synth Pop instrumental as well as the warm, inviting atmosphere that it’s doing a wonderful job of creating. The constant, repeating melody did take a little bit of getting used to but after a while I found myself thinking that I wouldn’t have done things any other way. Vocally things are pretty mellow, which matches the emotion of the track though the tone is a bit more melancholic which made for an interesting contrast with the accompanying instrumental. The melodies are very standout once again here, even if they are paced in a very deliberate fashion and not at all concerned with keeping pace with the instrumental. The choruses are fairly similar in style of the rest of the track, just turning things up so the vocals are even more bright and melodic and the instrumental more fuzzy and ambient. Nothing too crazy but it all ties together very nicely while giving a slight lift to help things along. The only knock I can really give this song is that it’s closing in on 5 minutes and by that point it might be sounding a little too repetitive for some people. I didn’t really find that to be an issue but I could see how some people could. I just really enjoyed the chill vibe and the melodies so much that I didn’t even really notice how long this one lasted.

Closing out this rather enjoyable debut release is “Resetroad”. It takes on a bit of different dynamic to the other tracks featured here, with an opening instrumental that’s introducing a twangy sort of Funk vibe into the mix. So something a little bit more energetic than we’ve heard up until now from RILISREVERSE then. Don’t get too excited though, things are definitely still very deliberate in their pacing but the tone is a very vibrant one and the underlying guitar riffs are playing a very large part in that. The vocals also have a lot more energy to them which is nice to hear after 3 fairly reserved but melodically beautiful outings. They still don’t quite match the tempo of the instrumental but give them a chance to get some momentum going and we’re treated to some nice flowing sections during several of the verses. The chorus I suppose is a little bit of a letdown if I’m being totally honest, as I was expecting the beat to pick up and for the vocals to get a lot more power behind them but neither of those things really ended up materializing. The hooks and melodies that we did get are nice but I just kept waiting for everything to be let off the leash ya know? I’m probably expecting a bit too much out of this group/producer in that regard though. We do kinda get more towards what I was looking for later in the track at least, with the instrumental taking on a fuzzier component and the vocals got a bit more flow and power behind them to match, so despite my earlier criticisms this one did end up finishing pretty strong here.

I think it’s pretty clear to everyone listening that RILISREVERSE are definitely the successor to HAMIDASYSTEM in a lot of ways. That being said, the group is bringing a few new things to the table and the addition of two more vocalists certainly helps to up the vocal variety on these tracks. I do kinda wish they’d push things like tempo or energy a bit more occasionally but the group’s current style certainly has its appeal too. All in all, this is a really pleasant release that I’d recommend you to check out if you like Electronica, fuzzy guitars and other such things.

It should be interesting to watch this group as it grows and develops over time. They’re starting out from a very strong position and I hope to see them build from here. I am a little bit worried about variety in sound and vocals after a certain point but it’s still early enough in the group’s life that I’m not too concerned about that just yet. For now I’m looking forward to what RILISREVERSE release next, whenever that might end up happening.

Enjoy the content? Consider supporting the site on Ko-Fi for as little as £1.
Increption Inc.Mini-Album ReviewRILISREVERSE
0 comment
FacebookTwitterTumblrRedditEmail