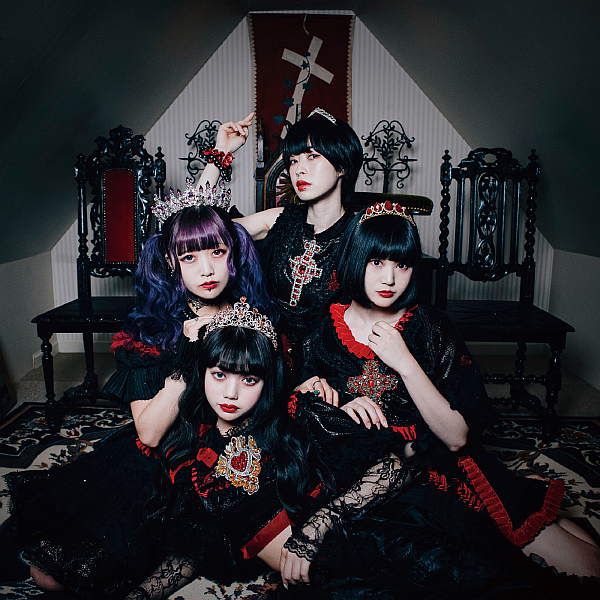 My thoughts on “The beginning”, a new digital single from BLACKNAZARENE.

The older I get the more I seem to be left scratching my head at what catches on with people and what ends up…falling by the wayside I suppose. It’s especially true in the Idol hobby as I can’t ever seem to predict what is going to catch peoples’ attentions next. There doesn’t seem to be much rhyme or reason to any of it but perhaps that’s just me talking from a perspective that isn’t down with the kids. Feel free to reach out and let me know!

BLACKNAZARENE are a group that I’m surprised aren’t more popular in our fandom and I’m pretty sure I said that during the lead-in to the last review I wrote that featured them. I dunno man, they’ve got a great look, some great songs and a pretty compelling member line-up. Sure, they’re not very THUGxKawaii or whatever their tagline is but it’s hardly the first time a group has had a somewhat nonsensical bit of branding attached to them. If anyone would like to shed some light on this topic then I’m all ears.

“The beginning” is a rather appropriate title for what is BLACKNAZARENE’s new digital single. It’s a brand new song that features the group’s new 4 person line-up and I guess they’re somewhat looking at it as a fresh start for the group. What that’s going to translate into on tape remains to be seen/heard but they’ve been doing pretty well up until now so I’m expecting something pretty good here…I hope. I also think it would be cool if everyone used this release to give BLACKNAZARENE another/first try so if you’re willing to do just that let’s hit play and see what we’re working with here.

This new chapter in the BLACKNAZARENE story starts off on a very bright and hopeful note, with some rather lovely piano playing acting as the accompaniment to some very clear and bright vocals. Not what you’d expect given the group’s image I suppose but man if this isn’t some nice sounding stuff. Then in comes the beat along with some fairly fuzzed out guitars to rough things up a bit, that’s more along the lines of the BLACKNAZARENE that I know. That piano is hitting pretty darn hard too by the way, more than pulling its own weight as we get settled in to the meat of the track. The vocals maintain their very melodic tone throughout, though maybe coming through a little less bright as the track develops so as to gel better with the new tone of the instrumental. It’s all really nice to listen to and there’s a few strong lyrical hooks along the way as well. The choruses take on a fairly traditional lyrical and melody structure I suppose, which is fine but I feel like they probably could have pushed the boat out a bit more honestly. The symphonic sounding instrumental going on in the background is nice enough though so it all works well together, it’s just maybe not the most interesting part of the whole song. Harsh criticism I know, especially when you’re competing against some really great instrumentation and highly enjoyable vocal performances elsewhere on the track. Those minor points aside this song is definitely more than worth your time if you have even a passing interest in BLACKNAZARENE or are wanting to check them out for the first time.

As far as fresh starts go, I’d say this is a pretty strong one honestly. Sure “The beginning” maybe doesn’t have the most interesting of choruses but that’s kind of what you’re signing up for with BLACKNAZARENE most of the time anyway I’ve noticed. Everything else on the track is great though, from the style to the execution. I can see this one doing really well for them if it gets heard by the right people.

Whether that ends up happening or not remains to be seen though I suppose. BLACKNAZARENE seem pretty comfortable doing their thing right now so I don’t expect them to suddenly start really putting themselves out there and trying too hard to appeal to lots of new people. They have their brand, they seem to know what they want to do with it and it’s working so far. You guys should give them an honest shot if you haven’t done so before, I really think you’ll like a lot of what you hear.

Enjoy the content? Consider supporting the site on Ko-Fi for as little as £1.
BLACKNAZARENEMARVELOUS ARCsingle review
0 comment
FacebookTwitterTumblrRedditEmail