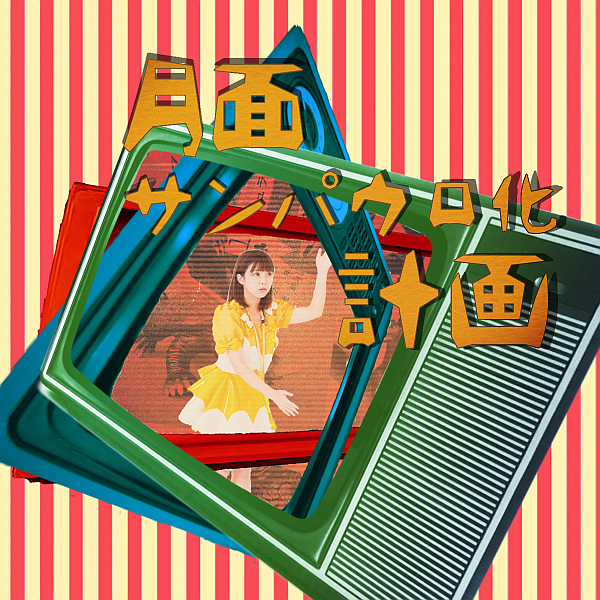 My thoughts on “Getsumen Sao Paulo Keikaku”, the second of two new mini-albums from Yuisrus.

Sometimes so of the best things in life are the things that come in small packages. One of the weirder openers I’ve written to a review lately but given that Christmas has (kinda) just been and gone I thought it was appropriate. Anyway, while the big all singing, all dancing things with the laser show and the pizza party in the back are really eye catching and cause a stir, it’s often the smaller things in life that have the most thought and passion behind them.

Yuisrus is one such example of this. Some of you might remember her from her time in You’ll Melt More! before she stepped away from the industry to focus on other aspects of her life. She recently returned to the world of Idol after a hiatus of just under 4 years and is now performing as a soloist. She might be small in stature but I’ve never seen someone command a live crowd quite like she does, so don’t let appearances fool you as she is most definitely a pro.

“Getsumen Sao Paulo Keikaku” is one of two mini-albums released at the same time by Yui. I already checked out the other one, “Gomenasai. Kyōryū wa, Yuisrus ga Zetsumetsu sa Semashita.”, and you can read that review here if you’d like to. Much like that mini-album, this one also features 5 tracks so in a sense we’ve had an album’s worth of material just split in half. I’m expecting similar to what we heard on the other release, but if you guys haven’t read that review yet don’t spoil yourselves and just jump right in here. Life is an adventure, right?

The mini-album’s lead track “Moze ni Tanomoze” gets off on a fairly chaotic note, with an opening instrumental that sounds more like someone rummaging through pots and pans than an actual composition. Of course it is actually fairly well thought out with an interesting beat but it’s just a little odd if you’re more used to more typical instrumental trappings. It gets a little more “normal” as the song adds in some more synth tones, along with a very brash sounding drumbeat with some particularly harsh cymbals giving the instrumental a bit of unexpected bite to it. Yui’s vocals aren’t exactly their usual chipper self either, coming through more on the melancholic side as she almost sighs her way through some of her lines. A stark contrast to her typical energetic displays, but very fitting for the mood being created here by the instrumental. It’s not until nearer the end of the track that her usual personality starts to seep through and things do get a bit more lively at that point, though on the whole I wouldn’t say this track is an accurate representation of Yui’s usual antics. Still, there’s plenty to enjoy here, from the pretty crazy xylophone solo about a third of the way in to the slightly off kilter guitar solo in the bridge. A lot different in tone to Yui’s usual stuff but the creative use of instrumentation and the personality of the vocals are both still very present.

“Brazil Kami (Braziljin)” is much more along the lines of what you’d usually expect to hear out of a Yuisrus song. First we’re awoken by an alarm clock before the song starts heading off in a fairly tropical sounding direction by way of a rather pleasant synthesizer melody. A brighter, more sparkly synth is then introduced as a way to transition into the first verse and like most Yui songs the instrumental tones it down a bit to let her do her thing. There’s a good amount of distortion on the bass heavy beats that form the backbone of the composition here, but it’s there to serve as a way to further elevate the much brighter and more high pitched vocals. Said vocals are overflowing with Yui’s personality as ever, with all manner of quirks and clever ways of delivering a line serving to make the song even more colorful than it already is. The chorus brings things back around to the tropical vibe we had going on earlier in the track and Yui delivers a catchy and rather melodic performance in her own unique way. Some of you will like her voice, some won’t and that’s okay because I personally think she’s pretty fun. There was also a pretty cool instrumental break towards the end of the song that I enjoyed quite a bit, though I really enjoyed the song in general if you couldn’t already tell. Just some nice, clean fun folks.

I’m not really sure how best to describe the opening instrumental sequence of “Uchū to Fancy” but I’ll try my best. It’s part someone scraping on a metal grate, part xylophone melody and part tambourine I guess? I think that’s what’s going on anyway, and despite how odd it reads on paper those three elements actually combine to create a pretty interesting instrumental. Vocals and a bit of piano are eventually added into the mix and the song does develop into something a little more melodic at this stage. It’s another fairly lowkey performance by Yui’s standards, opting to explore a more emotive, natural style of vocal delivery which she pulls off rather effectively I must say. The song in general has a fairly sombre, downcast feel to it and it kinda brightens up a little bit for the chorus but not totally. It sort of feels like there’s an imaginary filter or something that’s preventing too much brightness from seeping into the instrumental even if Yui’s vocals are doing their best to inject some on their own. There is a pretty cool synthesizer…solo I suppose? in the middle of the song however and that was pretty upbeat and cheery so there’s that at least. Something a little bit different from Yui once again but I’m pretty cool with her showing off how versatile she is so far on this release.

When you see a song with a title like “Electrical Pyonpyoko” you’re probably thinking that it’s going to sound a certain kind of way, I know I’m guilty of that anyway. I imagined that this song would be a pretty off the wall, wacky Synth Pop number because why wouldn’t it be right? Because this is Yui and that would be far too obvious, that’s why. What we ended up getting in the end is a fairly peaceful sounding Electro-Pop style song with a pretty interesting instrumental with a lot of very colorful sounds being produced by its array of synthesizers. The verses are normal enough, with a nice beat and bright melody being the standout features besides Yui’s vocals which have a bit of an echo on them but are pretty bright and pleasant to the ear in any case. The chorus is perhaps a little less bright and energetic by comparison but there’s still a lot of interesting synth parts in there too and the vocals change things up a little bit with a higher pitch and a slightly quicker tempo. From there the song shifts through a wide variety of styles and tones that I can’t even do justice to by listing off here. It’s a pretty vivid journey across a wide spectrum of weird and wonderful beats and melodies with the one constant being the vocals which attempt to tie it all together. Not an easy one to wrap your head around I’ll admit, but it had me coming back for repeated listens and that’s never a bad thing.

Closing things out on this particular mini-album is fifth song “Kaijirushi”. The song opens with a pretty nice 80s inspired synthesizer instrumental that I’m a pretty big fan of, something that should come as no surprise to any of you who know my personal musical tastes. This synth sticks around as more of a compliment to a pretty dominating beat as the song really starts to pick up but hey, I’ll happily take that as a compromise. Yui’s vocals are pretty natural sounding when they come in, though they are tuned a little bit to match the tone of the synthesizers, which I think makes sense given the style of song we’re going for here. The chorus isn’t a huge departure from the rest of the song though the instrumental does add in a couple extra bells and whistles (not literally, you get what I mean) and there’s a slight tempo uptick but generally speaking it’s pretty much the same style. You can go either way with your opinion on that and have a decent argument but I didn’t mind it too much myself personally. I’m a pretty big fan of this song for its 80s ascetic, and even if it is kinda repetitive it’s for good reason as the instrumental and the lyrics are designed to get stuck in your head and they’re pretty effective and doing just that. Probably my favorite song from this release if you asked me to pick one.

I feel like “Getsumen Sao Paulo Keikaku” has the more variety of the two mini-albums which is nice because if you only listened to “Gomenasai. Kyōryū wa, Yuisrus ga Zetsumetsu sa Semashita.” you’d maybe have left thinking that Yui is a bit of a one trick pony. That’s clearly not the case and while she definitely has a strong persona, there’s more to her than meets the eye…in more ways than one.

I’m probably bias because I’ve had the pleasure of experiencing Yuisrus in a live setting multiple times, but man her act and her music are just a ton of fun. Maybe that’s not something the more discerning Japanese music aficionados out there are looking for but she definitely fills a much needed role and it’s not like she can’t do the more serious stuff too when she wants to. Hopefully 2020 sees her increase in popularity and also maybe release another CD or two as well. That’d be pretty nice I think.

Enjoy the content? Consider supporting the site on Patreon for as little as $1 a month.
HAWHA MUSIC RECORDSMini-Album ReviewYuisrus
0 comment
FacebookTwitterTumblrRedditEmail