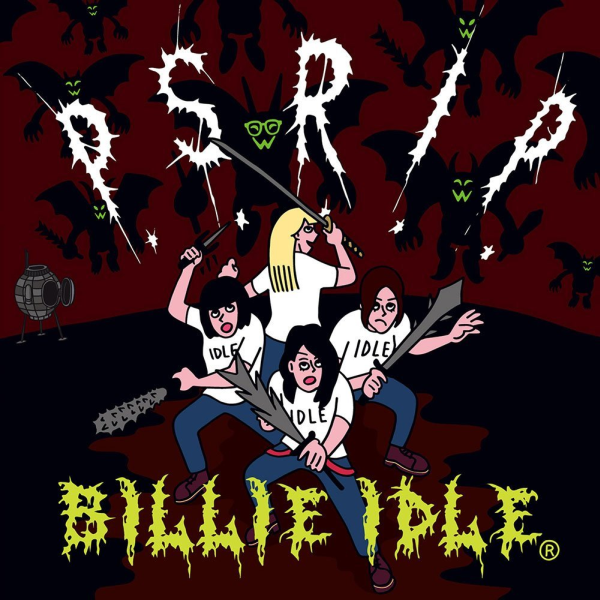 My thoughts on “P.S.R.I.P.”, the most recent single from BILLIE IDLE®.

At the end of 2017, I think it would be fair to say that BILLIE IDLE®’s future as an Idol group was uncertain at best. What with their producers NIGO and Watanabe Junnosuke giving an interview where they said that the group wasn’t as popular as they’d have hoped and might be in need of a re-branding of sorts. Couple that with their most recent album bearing the title “LAST ALBUM” and you would be forgiven for thinking that they might not be sticking around for too much longer. That certainly seemed to be the impression that most people I talked to in the Western fandom were under anyway.

Well, BILLIE IDLE® are back with a new single so I guess they’re not going to be hanging up their jeans and Doc Marten boots just yet. Although the single is called “P.S.R.I.P.”, which I guess you could read as PS. Rest In Peace if you really wanted to so maybe things aren’t going to have the positive outcome that I know I was personally hoping for. Or perhaps this is all just some marketing nonsense with the aim of getting people interested in the group. They seem to be selling out a lot of their one-man shows recently so if that’s the plan then it seems to be working.

One thing that we do know is that this single will be the last one that Watanabe Junnosuke is producing for the group. Whether that means that the aforementioned re-branding is on the horizon or not remains to be seen. I don’t really know what NIGO’s plans are but I believe the idea is for them to work with a variety of different producers going forward. For now though, I expect this single to play to the strengths that BILLIE IDLE® have displayed up until now. Those being catchy Punk/Garage Rock style tunes with some powerful vocals from Uika, Momo and Akira. Maybe they’ll throw a curveball in here and surprise me but I doubt it. Guess there’s only one way to find out though, right?

Let’s start with the single’s title track “P.S.R.I.P.”. I still honestly don’t know what it stands for so if anyone does know please leave a comment and tell me. Right off the bat I really like how they open up the song in a similar fashion to how BILLIE IDLE® typically hype up their songs live, a nice touch. The song then launches into the kind of Punk Rock sounding jam that we’ve come to expect from BILLIE IDLE® at this point. It’s a little bit deceptive though because if you’re actually focusing on the vocals you’ll notice that this is actually a fairly slow sounding song. Nothing wrong with that though, as the hooks they’ve sprinkled in will definitely keep your attention if the raw talent behind the delivery wasn’t already doing so. This is a really good song and exactly the kind of thing that I’m listening to BILLIE IDLE® to hear.

For our b-side we have the song “End Roll” which to my understanding is the closing credits for a movie/TV show/etc. Is that supposed to mean anything in the context of the position that BILLIE IDLE® are currently in? Who knows. As for the song itself, if “P.S.R.I.P.” was a slower song hidden in a Punk Rock instrumental then “End Roll” is much less subtle about it. Now I’m not saying it’s a plodding ballad, far from it, but you can definitely tell that this song has a much more melancholic feel to it along with just having a more measured pace in general. The incredible vocal talents of BILLIE IDLE® are still on show for all to hear though, which is always worth the price of admission alone. Instrumentally this kinda feels like the climactic ending to…something and it’s hard not to hear a bit of SCANDAL and other bands of that nature in the way things are structured and delivered. I personally prefer “P.S.R.I.P.” but this song is also very good too.


This is another very strong outing from BILLIE IDLE®, but should we really be expecting anything less at this point? It does kinda baffle me that BILLIE IDLE® aren’t more popular but I guess maybe this kind of music isn’t something that most people are into the Idol genre for in the first place? Plenty of bands out there for you to get your fix from perhaps. Either way it’s a shame because the music is really good and the girls are great vocalists.

It will definitely be interesting to see what changes, if any, are made in the BILLIE IDLE® camp after the promotional tour for this single reaches its conclusion. They’ll most certainly have a new producer(s) but will that also come with an image change and a change of sound? It’s hard to tell at this point and while I have my personal preferences I guess the only way we’re going to find out is when BILLIE IDLE® next release some new music. Whenever that might be.

The Alternative Idol Podcast Ep. 36 – PAiNT it BLACK to the dreamlight