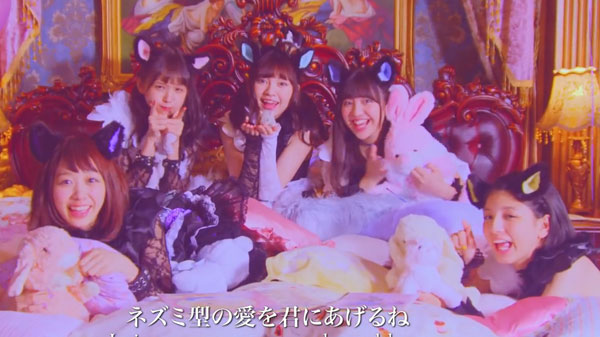 Wa-suta really burst onto the scene earlier this year. “Super Ultra Miracle Choco Beam etc, etc” pretty much reached meme status with much of the western fandom. Since I’m a lowly gaijin I can’t really say for sure how Japanese wota reacted to them, but their presence was definitely felt here. I’m totally ready for them to not live up to that. That kind of event is rare. And true, this new PV does not live up to the legendary “Choco Beam”, but it’s still a very high quality dose of idol insanity.

To be blunt, the first thing that stands out here are the outfits for sure. These outfits are much more showy their their previous offerings. Using a maid outfit as a base, these outfits feature mostly dark colors and a generous use of stockings, see through lace, and other elements I didn’t quite expect to see from this group so early on. Fortunately it’s nothing too inappropriate, but they certainly went for just a hint of sex appeal with these outfits. They definitely tie in with the more edgy moments of the song pretty well, and don’t look too out of place otherwise. I wish they featured a little more color, though. Except for Matsuda Miri and maybe Sakamoto Hazuki, the outfits don’t really feature the members’ colors at all.

The “what the fuck is going on” aspect we saw from Wa-suta previously is still abundantly present. The story of this PV is fairly light but very random in nature. A little self loathing is going on. The girls transition from scenes of acting like cats and teasing each other (don’t get any ideas) to dejected singing of being tired of so many damn idols being around and nekomimi’s being so last single.

Worry not, for these moments are purely comedic. It’s not like a Guso Drop PV where they start gutting fans or spilling blood anywhere. About the most hardcore moment we get is when they rip their cat ears off for the big dance break. It’s kind of amusing after that epic moment, because the cat ears return in the very next camera shot. But hey, that’s me being logical which this PV is not. It’s just wild fun, Wa-suta-style. One set of shots I find kinda meh are when a few CGI cartoon cats get the axe, which is one point in this PV where things get just a bit too weird for me. Sure, it’s all very cartoony, but it just felt a bit violent to be in a Wa-suta video.

The production behind this PV is top notch. Once again, we’re treated to a PV that is rich in CGI, aftereffects, pop-up text, and other post production goodies. Everything is absurdly high quality and looks fantastic. There are several set pieces, with a lot of scenes taking place on a bed, in a fancy dining room, and even outdoors. It’s all so randomly presented as to be barely focused on, but if you pause and have a peek, the set pieces are all very intricate. All of the post production elements mesh with the real stuff in an almost film-like quality.

This group had a lot to live it up to with their first single being as awesome as it was, and I think all in all, the group maintained their hype. It’s certainly not pushed to a next level, if there even is one, but this is a beautifully presented, fun, energetic PV.

The song itself is really fun. The random changes in style are done nicely and while the instrumentals may not quite have the same pop as their first single, they more than get the job done. The rock portions especially are really well done. The vocals are about the same as we heard before. There are some fairly impressive moments, such as the harmonizing at the end of the rock verses, but for the most part it’s just good idol fun.