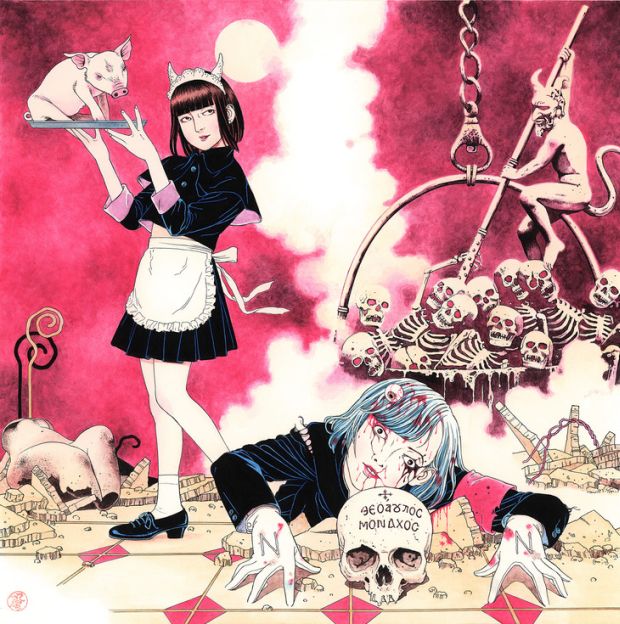 My thoughts on the debut album from NECRONOMIDOL.

I think it’s fairly well established at this point that I’m more interested in what I guess someone would consider “weird” idol groups. I mean, if that’s what you want to call it when someone doesn’t just enjoy the standard, easy listening style of J-Pop then I’m guilty as charged. Everyone has different tastes after all.

On the subject of NECRONOMIDOL, they are indeed a pretty weird group by most standards. I got into them pretty early on, after I think I saw a tweet or something for this video where they’re making straw effigies. Shortly after that they released the song “あたいの爪痕” and I’ve been keeping tabs on them ever since.

Before we get into the meat of this review, I guess I’ll state the incredibly obvious and say that NECRONOMIDOL aren’t for everyone. If the terms “Black Metal” and “Darkwave” make you feel a certain kind of (bad) way then I’m not sure there’s going to be much here for you. Then again, maybe if you give this album a chance it might just surprise you. I know it certainly surprised me in a few places and I’m supposed to be the one who knows what they’re taking about here.

Okay so just break things down a little, “NEMESIS” is a 14 track album with 4 of said tracks being brand new as far as I can tell. All the rest have featured on previous singles. However, NECRONOMIDOL have had some line-up changes in the period between now and their debut, and I think it’s fair to say that their performances have also improved. These factors have lead to the 10 “old” songs being re-recorded and given a fairly significant overhaul if you compare them to the original versions.

Like I said in the intro to this review, the majority of this album resides in the genres of Black Metal and Darkwave. Darkwave for those of you who don’t know is basically “dark” sounding synth-pop. There’s a couple of songs that stray into a more up-beat territory, but for the most part it’s a very methodical, low tempo affair. It’s all done incredibly well in my opinion, but if you’re not normally into that kind of thing it can be hard to get into.

That being said, there are a couple of songs on this album that I think could appeal to a wider audience. “暗黒少女戦隊” and “LAMINA MALEDICTUM” are much more upbeat and rock-oriented than much of the album and are both incredibly enjoyable as standalone songs. Then we have “Skulls in the Stars” which is by far one of the most enjoyable songs I’ve heard in a while. The beat and vocals are fantastic and if you only check out one song from this album, make it this one (it should be getting a PV soon I believe).

This isn’t really anything to do with the music quality, but I also appreciate that the music actually matches the aesthetic that NECRONOMIDOL are going for. It’s nice that when an idol group likes to paint their faces kabuki-style, wear lots of black and have a member with green hair, that their music isn’t just some boring generic metal or hard rock deal. There’s way too much of that these days so it’s nice to hear something different every once in a while.

I personally don’t have any major complaints about this album. There’s some minor stuff, like a few of the songs do sound kinda similar which happens on pretty much any album really. I guess from my perspective as an older fan, only getting 4 new songs also maybe isn’t the most ideal scenario but when they overhaul the other 10 it’s kinda hard to feel too hard done by.

While I didn’t really notice this, I have read a number of people online bring up that to them they thought that the mastering could have been better. I mean, some vocals and instrumentals do maybe sound kinda iffy but honestly it’s really hard to tell if that was a screw up or by design. I’m also not a sound engineer so what do I even know about this.

When I really think about it, I guess my biggest complaint is the fact that this album isn’t available on iTunes yet (at the time of writing). I’m sure they’re working on getting it up on there, but it’s kinda hard for me to sell people on this thing (not even factoring in genre biases) when the only way to get is from a Japanese e-retailer or by physically going to Japan. The videos in this article all feature old recordings of the songs too, so they’re not that great of a preview either.

Anyway, “NEMESIS” is a great album assuming you can get past any hangups or preconceived notions you might have, be they of the cover, how the girls of NECRONOMIDOL like to dress, or the genres in play. “Skulls in the Stars” is a fantastic song and I would encourage you to at least give the videos in this article a look (even if the recordings are old).