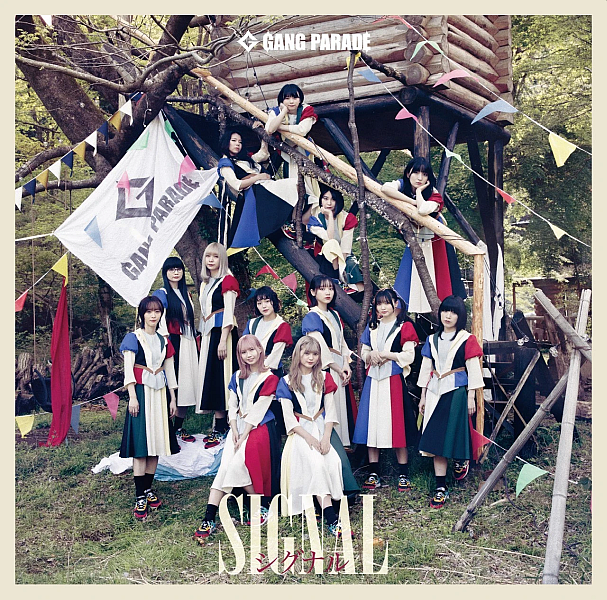 Some thoughts on “SIGNAL”, the latest single from GANG PARADE.

Look, we’re all friends here right? And friends are accepting and forgiving of other friends’ potentially unpopular opinions right? Okay, so to be totally honest as a GANG PARADE fan back in the good old days, I wasn’t really feeling this whole GO TO THE BEDS and PARADISES thing that the group had been doing for the past year or two. One group was clearly (in my mind at least) outperforming the other and even then it sort of felt like both were missing something to make them whole, like an entire other half perhaps.

Anyway, it seems like some other people might have been feeling a similar sort of way to me because GANG PARADE are now back with a 13 member line-up and seem to have just picked right back up where they left off for the most part. Kinda makes you wonder what the point of splitting the group up in the first place was if you ask me but hey it was a thing and now it isn’t so I guess that tells you all you need to know about how management probably felt like that whole episode was going.

“SIGNAL” is actually the group’s second single since returning from their “hiatus” as they like to call it. I thought I wrote about “PARADE GOES ON” when it came out earlier in the year but I guess I didn’t or it got lost to the depths of my hard drive somewhere. Oh well no point dwelling on it I guess, we’ve got a single here to chat about a bit and yeah I guess we’ll see what sort of vibe that GANG PARADE are going for on this particular outing. 13 people singing on the same track? What could possible go wrong.

The single’s title track is an interesting mix of super upbeat Pop song and Ballad, which sounds a bit weird to read on paper but it makes a lot more sense when you’re actually listening. The verses are mostly the latter style and are carried by the stronger singers in the group with everyone coming in for the looser, more fun high energy dynamic of the choruses. There’s a mildly annoying layer of distortion applied to the more hectic parts of the track that I’m not overly fond of but otherwise it’s a pretty fun listen and more along the lines of what I imagine most people would be looking for out of GANG PARADE.

If you had your heart set on getting a Ballad out of this release for some reason then “Sukoshi Otona ni Natte” should be right along the lines of what you’re looking for. It has that warm, mildly fuzzy instrumental that just radiates pleasant, feelgood vibes so they definitely know what they’re doing here at least. Vocally it’s a decent enough performance too, nothing too flashy going on and some nice clean tones from everyone which is cool to hear as well. Overall a fairly simple track by WACK standards but it hits all of the right notes (heh) so not much to complain about here.

A pretty decent single overall from GANG PARADE here and one that offers a couple of different things stylistically so a healthy amount of variety for a 2 track release in my view. Having so many voices involved never really felt like an issue at any point either and they seem to be trying to play to everyone’s strengths too which can only be a positive. Nothing overly weird or experimental either which is either a positive or a negative depending on your preference.

Yeah, I think GANG PARADE is a pretty good example of a group that is greater than the sum of its parts. I mean that in the best way possible of course as I just think it lets all of the members work to their strengths instead of trying to compensate for their weaknesses. I’m looking forward to seeing what comes next, just don’t expect me to go review either of those massive re-record albums they recently put out alright?